This is a good time of year to look at statistics. It’s just past the middle of the year and in theory, it should give you a reasonably good idea what the year will look like. But my stats have gotten pretty erratic and I have bursts of big numbers, then occasionally surprisingly low numbers … and we are still hoping to go on vacation next week which will probably mean a nearly zero week for the numbers game.

I really shouldn’t care. I’ve been at this a long time and I know that stats don’t mean much except when they dip very low and I realize WordPress has disappeared me from their database.

I’ve had years when I got a huge explosion of big numbers from them and years when I get almost nothing. For reasons I don’t understand, about 1000 of my Facebook followers have recently vanished along with about 2500 blog followers. Not sure what that’s all about but I haven’t cared enough to follow the trail of crumbs and see what’s going on. It would require yet one more annoying conversation with their Happiness Engineers.

Aren’t those people embarrassed by that title? I would be ashamed to tell anyone I was a Happiness Engineer for WordPress or for that matter, for anyone.

But I suppose a paying job is a paying job and these days if you get one that pays the most of the bills and keeps and your family living in a house with heat, light, and a roof that doesn’t leak, you’re doing fine.

We used to have higher standards, but as time as marched on and things like “raises” have become scarcer than hen’s teeth, we are just happy if we manage to keep even.

Now that we are on a fixed income, we can’t even count on staying even. In theory, Social Security pays “cost of living” raises to its recipients, but whenever Congress is feeling poor, the first people whose “cost of living” that mangle are retirees. After all, we are old and therefore we don’t need anything, right? Like … you know … food. Medication. A home. A car. We just need a little, dark room in which to quietly disappear.

If we would just stop doing annoying things like voting, we could be completely dismissed.

Except we do vote. More than any other age group, we vote. Moreover, we think about voting well in advance of doing it. We actually watch the news with all the advertisements for medications we can’t afford, reverse mortgages that will ultimately leave us living on the sidewalk, how to sell off our life insurance, and how to sue people who have ripped us off.

Can we sue the Federal Government? They are the biggest ripper-offers of all time.

In God we trust. We might as well trust in God because we sure can’t trust the people we elected. Or other people elected. I’m sure I didn’t elect them!

Stats. I have pretty decent stats. I don’t work at them anymore and when the numbers drop into low digits, I shrug. Tomorrow will be better. Probably. If it isn’t, does it matter?

I would like to make a difference, though I’m not sure what that means anymore. The world in which I live is twirling on its ear and the future is looking a bit abbreviated.

July Blues in the Square

It was a lovely crisp Saturday morning. I was heading north out of New York to visit Garry in Boston. I don’t remember which car I was driving. Probably my turquoise VW Rabbit, my personal pocket rocket.

I am not a slow driver, though I try to be a careful one. If I see a wide open road and I figure I’m not going to get a ticket, I’ve been known to put the pedal to the metal, perhaps a tad faster than the legal limit. Which is why I was surprised, as I drove along in the left lane of the limited access highway, to be passed on the right and cut off — leaving just millimeters to spare — by a vehicle going so fast he nearly sucked the doors off my car.

I was a bit shaken, especially since he had no reason to cut me off at all. The road was empty. He had plenty of room, so he was just being an asshole. I hadn’t even seen him coming.

“Go tiger,” I murmured, looking at my speedometer. I was going a smidge over 80 MPH, so how fast was he going? He passed me as if I were standing still.

I continued on my way, made merrier by the music on my radio … until I saw flashing lights ahead. I slowed. Then I slowed more until I was crawling along.

Blue lights were flashing everywhere. This was no normal speeding ticket stop. It was not one or two police cars. There must have been a hundred or more squad cars, motorcycles, and a couple of vans.

It was a cop convention!

My speeder had plunged into the heart of a law enforcement convoy!

The fellow, a young man of unimpressive demeanor, was standing on the shoulder of the road, hands in the air looking terrified. Officers stood near him. They had bagged a good one and were clearly having fun as only a convention of cops can.

Justice, so rarely served, was coming to one who thoroughly deserved it. I doubted he would ever speed again. I couldn’t tell if he had wet his pants, but I could hope.

I gave a thumbs up to the cops standing around writing as many tickets as they could think of.  I still wonder how many he got. In returns, a number of cops gave a thumbs up.

I was laughing the entire rest of the trip to Boston.

Growing wild by the river, a yellow daylily 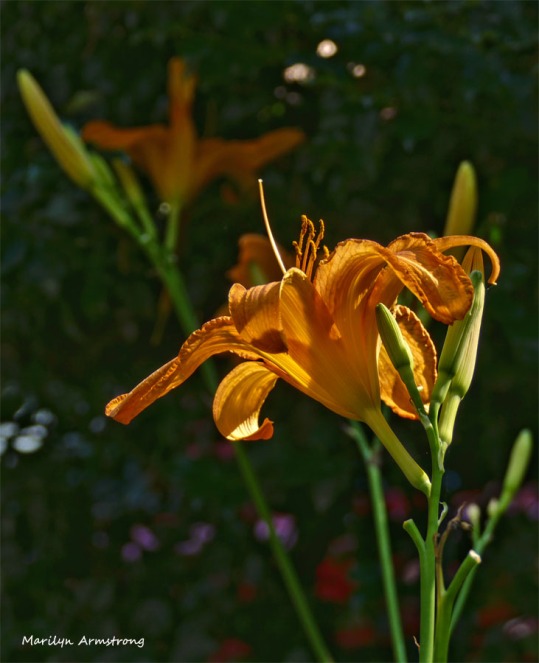 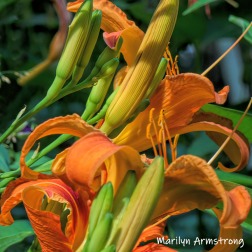 A clump of daylilies 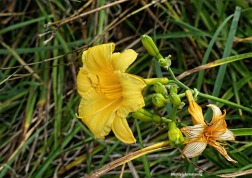