POSTWAR: A HISTORY OF EUROPE SINCE 1945 – TONY JUDT – Marilyn Armstrong

Postwar: A History of Europe Since 1945
by Tony Judt

Available in paperback, hardcover and as an audiobook

I have run this review a few times before because I think of all the reviews I’ve written, this one in its current and previous version, is probably the most important review I’ve written and I cannot street sufficiently how important a book I believe it is.

Every time I write about history, this book comes up. I know it’s long and I know it’s a serious read (or listen), but it changed the entire way I looked at World War 2 and to a degree, World War 1. I mostly read “light and fluffy” these days, life being stressful enough anyway, but this one, I cannot possibly encourage you enough to read it. Even if you read it in pieces, bit by bit over a long period, I guarantee you will understand everything about today’s world a lot better than you do. 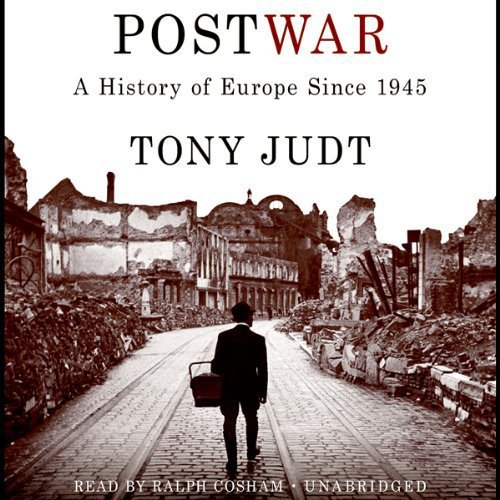 Reading PostWar was a project, an immersion experience during which I first unlearned, then relearned everything I knew of modern European history. It was worth the effort.

This is a long book — 960 pages — crammed with so much information I had to read it twice before I felt I had a grip on the material.

Dr. Tony Judt was an historian with controversial opinions. He made no pretense of being a neutral observer. Not that any historian is really neutral. Every historian has an agenda. Whether or not he or she puts it out there for all to see is a matter of style, but there is no such thing as historical neutrality. If an historian is writing about an era, he or she has an opinion about it. All history is slanted, changed by the historians who write it.

Dr. Tony Judt believed the role of an historian is to set the record straight. He undertakes the debunking and de-mythologizing of post World War II European history. He lays bare lies that comprise the myth of French resistance, the “neutral” Swiss, the open-minded anti-Nazi Dutch — exposing an ugly legacy of entrenched anti-Semitism, xenophobia and ethnocentricity.

Although Judt follows a more or less chronological path from World War II to the present, he doesn’t do it as a strict “timeline.” Instead of a linear progression, he follows threads of ideas and philosophy. Tracing cultural and social development, he takes you from news events through their political ramifications. You follow parallel developments in cinema, literature, theater, television, and arts, not just the typical political and economic occurrences on which most history focuses.

After two consecutive readings, I finally felt I’d gotten it. Postwar changed my view of the world, not just what happened, but what is happening.

Tony Judt and I were born in 1947. We grew up during the same years, but his Old World roots gave him an entirely different perspective. He forced me to question fundamental beliefs. What really happened? Was any of the stuff I believed true? Maybe not or at least, maybe only partially. It was hard to swallow, but he convinced me. I believe it.

If you are Jewish (I am and so was Judt), and lost family during the Holocaust, this will stir up painful issues. The depth and breadth of European anti-Semitism and collusion in the destruction of European Jewry is stomach-churning. Pretty lies are easier to deal with than ugly reality. It’snot hard to understand why so much of what we know is wrong but I think it’s important to recognize that it is wrong. Sometimes completely wrong.

Map of Nazi conquest of Europe as of 1940

Even though I knew history, I didn’t grasp the impact of these years until Postwar made it real. I assumed, having lived these decades and followed the news, I knew what happened.

I was wrong. What was reported by American media barely scratches the surface of “truth.” The transformation of Europe from the wreckage of the war to modern Europe is more extensive, complex and far-reaching than I had grasped. These changes affect all of us directly and personally.

I read Postwar on paper, then listened to the audio version. Available from Audible.com, I recommend it to anyone with easily-tired eyes. It has excellent narration and is a fine showcase for the author’s conversational (and controversial) writing style.

Postwar is analysis and criticism, not just “what happened.” The book is an eye-opener, totally worth your time and effort, an investment in understanding and historical perspective. It’s never dull. After reading it, you will never see Europe or World War II the same way.

Moreover, what is happening now will make a lot more sense, in an awful kind of way.