Home › dogs › SNOOPY AS A ROLE MODEL – BY ELLIN CURLEY

SNOOPY AS A ROLE MODEL – BY ELLIN CURLEY

I read a unique article in the Washington Post by a writer talking about something from her childhood that inspired her to be a writer as an adult. Her name is Ann Patchett and her title names the motivating force in her career choice. The article is called, “Snoopy taught me how to be a writer.”

That’s right – the Snoopy from Charles Schultz’s beloved comic “Peanuts”. The perpetual loser, Charlie Brown’s dog. Ann says she read Peanut compilation books, as I did, in her formative summers and was smitten by Snoopy. She says that she was a nerdy, uncool kid who saw Snoopy as the essence of cool. He even raised the totally uncool status of his ‘person’, Charlie Brown, just by being so quintessentially cool himself.

Snoopy was confident enough to let himself become totally absorbed in his fantasies – WWI Flying Ace, Soldier in the French Foreign Legion, figure skater, tennis star, astronaut, and so on. He brought everyone else along with him in his fantasies to the point that they too heard the imaginary bullets flying by and the roar of the imaginary crowds. 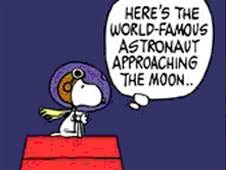 Most important, Snoopy was a writer. He let his imagination run wild here too and then he sat down on the top of his doghouse and typed. He sat at his typewriter and plinked the keys to form hackneyed and repetitive paragraphs that he knew needed ‘editing’.

He had confidence and sent his manuscripts out to editors. He got lots of rejections, like all writers, yet he kept on trying. The best thing about Snoopy was that even when he failed and his doghouse was riddled with bullets, he lost in sports or his manuscripts were rejected again, he was still cool.

His superpower was that he remained cool in failure as well as in success. 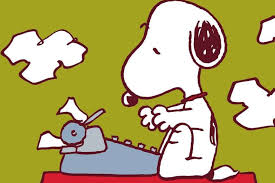 Snoopy at his typewriter

Anne says that Snoopy taught her how to survive the publishing process; to deal with rejections and then get over them; to ignore bad reviews and move on. Snoopy turned out to be her perfect career mentor and he also led her into a life with dogs who enriched and fulfilled her. She says she always assumed that her dogs have an active inner life and are always cooler than she is.

I was never inspired to write. I just always did and so did my parents. My school required creative writing and analytical writing as well as research papers from the third grade on. My high school papers are indistinguishable from my college ones.

My father published seven books and numerous articles in the field of psychiatry and anthropology, many before I was born. He spent every summer locked in his study, writing, Every day he would present his writing to my mother who would edit it and encourage rewrites when needed. There was a lot of heated discussion about content, organization and writing style throughout my childhood. 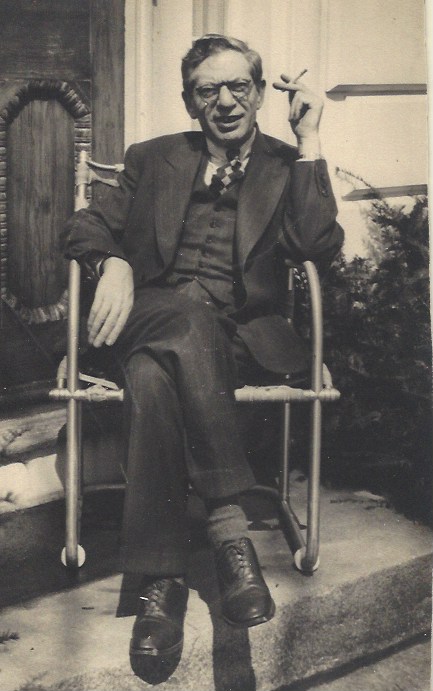 My father in his fifties

When I was around fifteen, I joined my mother and we became my father’s editing team. As he got older, his writing often rambled and went off-topic and it was our job to keep him focused. We often had to outline material for him and even rewrite sections ourselves when he resisted our ‘advice’ and insisted on his now more stream of consciousness style. That may work for fiction, but not for an academic treatise.

Writing has always been a part of my life. I went through a period of anxiety and insecurity in my own writing when I was in high school and my mother did for me what she did for my father. She helped me figure out what I wanted to say and the most effective and persuasive way to say it. She taught me how to organize my thoughts and present my ideas cleanly and clearly.

When I started writing short audio theater plays with my husband, I had to learn how to write dialogue, which is a totally different kind of writing. I was used to writing analytical prose, which is not the way people talk. Dialogue has to sound like someone is actually speaking, not reading aloud from a non-fiction book.

So my writing evolved and expanded to encompass a new format for me. It is amazing and gratifying to hear actors bring your words to life. It’s even more awesome to hear audiences reacting to your words by laughing and applauding.

Title page of one of our scripts

I loved Snoopy too growing up, but I identified more with Linus and Charlie Brown than with the fearless, adventuresome Snoopy. I can imagine that if Snoopy ever wrote short plays, he would picture the adulation of audiences and bask in their approval. I’ve had that experience, so in a way, I’ve had my ‘Snoopy moment.’

Even a nerd like me can feel cool. But never as cool as Snoopy.