WOMENS’ ROLES IN JAPAN – CHANGE AND STAGNATION – BY ELLIN CURLEY

Many things have changed in Japan since WWII but many things have also stayed the same. This dichotomy is creating unwanted trends and having far reaching consequences for the entire country.

Certain cultural expectations have remained static over time. Employees are still expected to devote most of their waking hours to their company. Working past 10 PM is the norm and men are often expected to take clients out for drinks after work. Rigorous targets must be met in order to get raises and promotions. This culture of overwork even has a name – “death from overwork.” It’s been argued that this demanding work environment leads to inefficiency and low productivity yet it still has a tight hold on Japanese work culture.

Another social phenomenon that has not changed is that women are still expected to care for the home, children and elderly relatives. They are also still given onerous tasks that they must fulfill to adequately perform their roles in the home. Cooking, for example, is a major job for Japanese women. They must prepare numerous, small dishes for their families every day AND the school lunches that they must prepare for their children have to be works of art!

Dishwashers are not as common as in the U.S and neither are dryers capable of doing large loads. So most women have to hang wet clothes on clotheslines outside, which dramatically increases the amount of time needed to do a family’s laundry.

But this is just the beginning. American women would be horrified at the volume of paperwork women have to do, every day, for their children’s schools and day-cares.

That’s right. Pre-schools demand meticulous and voluminous daily journals documenting their children’s temperatures, what they eat, their moods, conversations, sleeping hours and playtime activities. The elementary schools and after school tutoring classes, ubiquitous for older children, also require that a parent corrects and approves every page of their child’s homework. Women are thus swamped with household and bureaucratic tasks at home, which affects their ability to work outside the home.

Here comes the change part – now close to 70% of women 15-64 have jobs. Nevertheless, the heavy burden of domestic tasks holds women back from advancing in their careers. They can’t put in the crushing hours men do when they are on the promotion track. As a result, almost half of all working women only work part-time and often the other half are on temporary contracts. This creates a huge pay gap between men and women and also a shortage of women in management-level jobs.

Only 1% of the female workforce is in management. Yet women who work more than 49 hours a week typically also put in close to 25 hours of housework a week. Men typically average less than 5 hours a week, even when their wives work too. Thus Japanese men do less housework and childcare than men in any other of the world’s wealthiest nations.

This rigidity of gender roles at home has ramifications in the economy and society. Japan’s economic status in the world has stagnated and China has overtaken Japan as the world’s second-largest economy. The Prime Minister of Japan has pledged to return the economy to steady growth, which means countering the severe labor shortage due to a declining as well as a rapidly-aging population. To increase the workforce and energize the economy, the Prime Minister’s goal is to elevate and increase women’s participation in the workforce. This initiative is called “womenomics.”

The problem is that for women to increase their impact on the workplace, everyone has to reduce the bruising hours expected at work so the women can begin to catch up to the men. In addition, the rigid and excessive demands on a woman’s time at home have to be reduced – and/or these tasks must be shared more equally by the husbands. But that would require a major change in social norms and entrenched gender roles, which is not likely to happen quickly.

However, social change is happening in Japan, just not in the way the government wants or society needs. The biggest trend in Japanese society today is the tremendous surge of women choosing not to marry at all! More and more women are rejecting the life of domestic drudgery that comes with marriage and parenthood and the concomitant drag on their career advancement.

The Japanese are exhausted most of the time

This is a problem because Japan is also suffering from a decline in population that politicians are frantically trying to reverse. The birth rate is the lowest it’s been since 1899 when record-keeping began. The economy can’t continue to grow if the workforce continues to shrink. 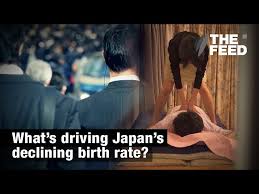 The statistics on women staying single are dramatic. In the mid-1990s, only 1 in 20 women in Japan had never been married by the age of 50. By 2015, 1 in 7 remained unmarried. In women ages 35-39, 10% were unmarried 20 years ago and now 25% are staying single. The number of couples getting married is at its lowest level since WWII. 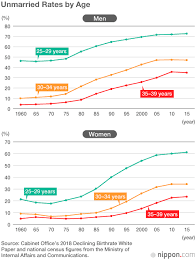 There is some good news for the business world. A growing number of new businesses have sprung up to cater to this large market of single women. Single Karaoke Bars have women-only zones, restaurants market to solo diners, travel companies book tours for single women and photo studios offer photoshoots where women put on wedding dresses and pose for solo bridal pictures. There are even solo wedding ceremonies for women committing to their independence and their single, career-oriented lives.

Women no longer need husbands to ensure their economic security because if they stay single and avoid the cultural demands on wives and mothers, they can put in the hours to get ahead at work. They can also have the freedom to pursue hobbies, travel and cultivate large circles of friends. Many see this lifestyle as more rewarding than being stuck in the quicksand of the socially mandated gender role of wife and mother.

Until these domestic roles are redefined, Japan will see more and more women opting out of the domestic rat race. And the population will continue to decline along with the economy. I’m not sure how the government can mandate the kind of social change they need, but they may have to try. It should be interesting to watch how this social experiment works out.