Yesterday, it was me, a quick dental visit confirming that the previous week’s marathon procedure was a success. I still have some eating problems, but it is much better.

Today, it was the car dealer. A couple of weeks ago, we took the car in for a warranty repair and to replace a recalled part … and along the way, a piece that keeps the car’s hood attached to its body broke.

It is the right-side hood latch; I’m sure it has a special name, but I don’t know it. I don’t think the Service Manager knew its name either. It’s a widget of unknown origin. 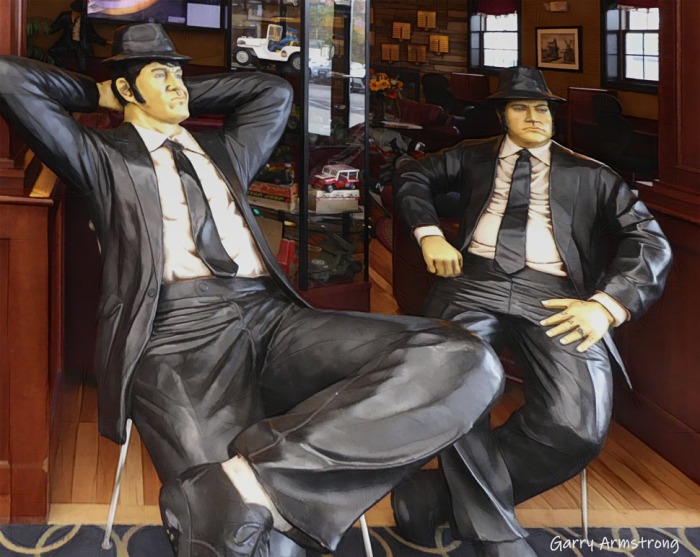 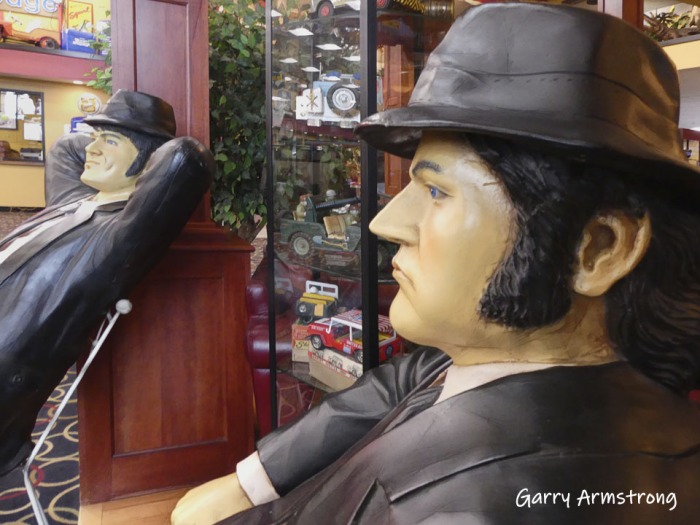 Just hanging out, waiting for their car to be finished

Our dealer is a fun place to hang out.  While the automotive Dr. Zorba figures out how to fix our 2015 Jeep Renegade, there’s a ton of stuff to look at. Sometimes, we go there just to take pictures. It’s that kind of place.

The dealership venue is wonderful to prowl. The owner is a collector of Hollywood and automotive artifacts, souvenirs and other stuff. Whether or not you’re a car person, it’s not boring. It’s also a brilliant idea to help customers cope with pricey repairs. You can hang with the Blues Brothers who occupy a front and center position at the entrance to the main showroom. 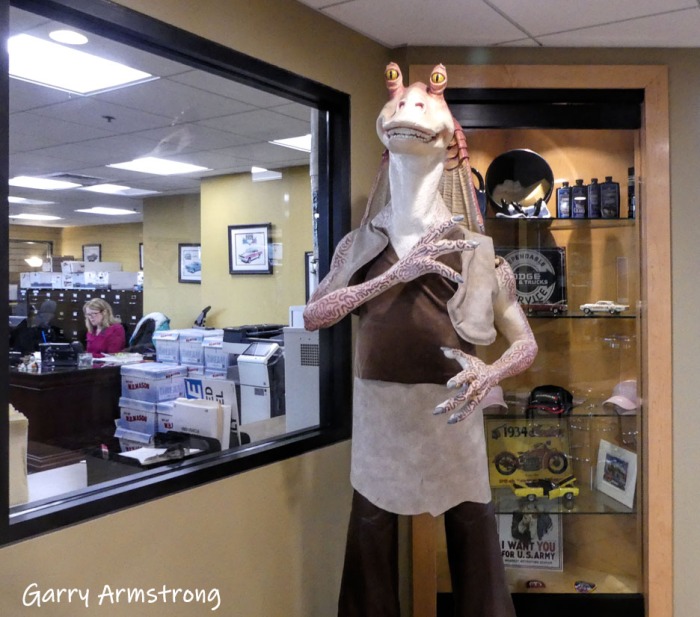 Welcome to our accounting office 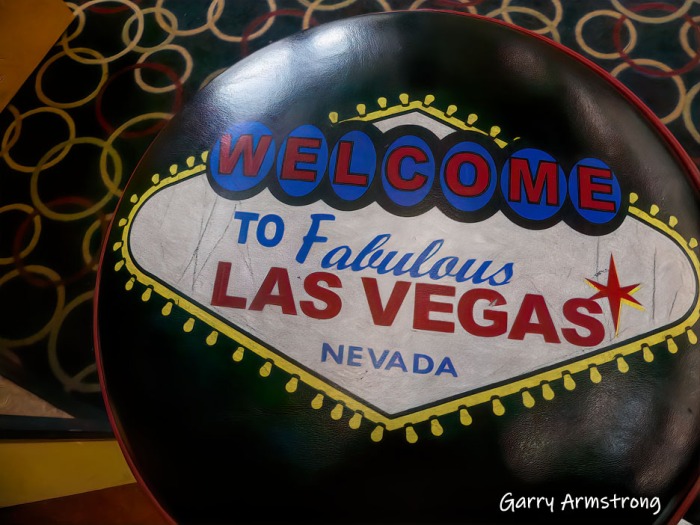 The Boys grab your attention if you’re not cool with the cooking show on the giant TV screen. I actually watched the cookie program for a view minutes as the manly chef whipped together some kind of oat-filled casserole. It looked interesting but I’ll pass on anything related to oatmeal which is right in there with lima beans on my “Thank you, but NO” list.

There also are lots of nifty celebrity photographs. I’m not sure whether we’re supposed to believe these folks were car buffs but who cares? It’s the image that counts. If you’re blinded by the reflections, sorry. I tried my best.

You might want to chat with the Rat Pack replicas. Maybe they’re rehearsing for a gig, so if you want to splurge on a luxury car, Frank and Dino are pleasant companions –Las Vegas-style. Apparently, there are still people who have disposable incomes. I vaguely remember that term from my working days when I briefly considered buying my dream car. Until I realized we wouldn’t be able to eat or continue living in our yuppy-priced apartment. Decisions, decisions.

There are lots of knick-knacks to remind you of the good old days for car owners. You can almost hear the ads of yesteryear: “See the USA in your …”  It was the wrong ad for this dealership, but you get my drift.

I didn’t own a car until I’d graduated from high school. I felt so deprived when I saw my classmates with their cool wheels. Memories rush through my head as I gaze over the showroom. These cars don’t have the distinctive character of the rides of our youth. That was when you could tell a Chevy from a Caddy from a Buick and you didn’t even have to be “into” cars. The price of progress, as Spencer Tracey warned in an old film. 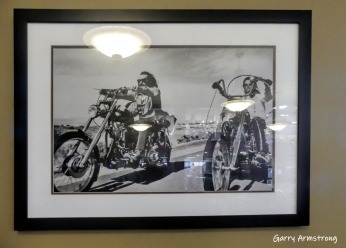 The weather probably impacted the business. It was quite a storm that started last night and continued through most of today. Not many people outside, looking over all the cars waiting for a home and owners who’ll treat them with care. It was gray and windy with rain hovering on the horizon.

Outside, the weather threatens

There was powerful wind out there today. Like some Washington bigwig had passed gas again, spinning tales like a used car salesman. Or a Lawyer who promised to turn his life around after chasing his last ambulance.

Our car received a temporary prescription. Check with Dr. “Trust Me ” Zorba in two days.

The ride home was an adventure. Lots of Steve McQueen types on their own road to perdition. That two-lane road doesn’t allow for Le Mans-style driving but try telling that to those jokers.

The trek gave me time to observe the rapidly changing autumn foliage, too. The sun drifted in and out of the cloudy sky and the wind-tossed leaves blew hither and yon. Every turn in the road offered a new technicolor scene. This is when I really appreciated living in our valley of rivers, creeks, dams, and woods. People still come to the valley from all over just to see the leaves. 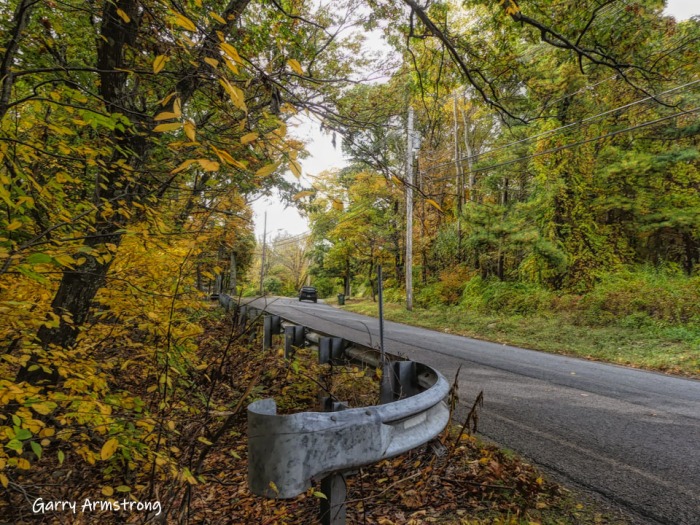 I had the Sinatra station going on our car radio. My kind of music. It played well on my drive as I realized late afternoon had crept up on me. A late autumn afternoon when the sky darkens quickly, imbuing it with color changes, adding shadows to the trees swinging in tune to the increasing wind gusts. I sensed a need to get home quickly before the skies opened.

Trees in the front

Through the wood glider with sun peaking through

Sinatra was singing “When The World Was Young” followed smoothly by Ella Fitzgerald’s “When Sunny Gets Blue,” Tony Bennett’s “Once Upon A Time,” Sammy Davis’ “Mr. Bojangles.” As I pulled onto the road to our house,  Sinatra was back again with his vintage “Autumn Leaves.” It was perfect timing. Thanks for the company “SiriuslySinatra.”

A quick survey of our home showed Mother’s Nature’s darkening mood as the late afternoon stretched lazily down our driveway and across our front and back yards. No picnics today as the clocks rolled toward dinner time for the dogs who waited, with precious little patience, for their dinner.

Maybe I could get Sinatra to sing for them. How about “Young At Heart,”  my furries?