“SAN ANDREAS FAULT” ALL THE AWFUL IN ONE MOVIE! – Marilyn Armstrong

San Andreas Fault is not merely a disaster film. It is every disaster film you have ever seen in one film. It’s earthquakes that will turn Kansas into the Pacific beach capital of the nation. It’s crashing buildings, towering infernos, the hugest OMG tsunami. We get to see the bravest heroes and most craven cowardice.

Every cliché from every disaster movie made in this and the previous century includes a lot of movies.  Worse, I’m pretty sure we’ve seen all of them, but we’d never seen this one before.

I think it was originally filmed in 3D. Everyone said it was drivel, but it made more than $300,000 million at the box office, so clearly drivel sells well.

It certainly sold well at our house. When the intended second husband of Dwayne “The Rock” Johnson‘s wife (Carla Gugino)  played by Ian Gruffudd (aka “The Asshole”) abandons Rock’s daughter to her fate, trapped under fallen cement in a parking garage, it’s no less than you expect from the cowardly CEO of a major corporation.

We know they are cowards because … well …that’s what they always do in the movies, right? Have you ever seen a brave, manly CEO stand up to anyone or anything outside a boardroom? Especially when they are trying to marry the hero’s ex-wife who we all know should be with the hero.

Even though The Hero can’t utter a coherent sentence (and probably hasn’t since he came back from The War (insert name of war here), he’s a hero (with medals to prove it) and would never run, not even when a million tons of water and a complete cruise ship is about to fall on his head. 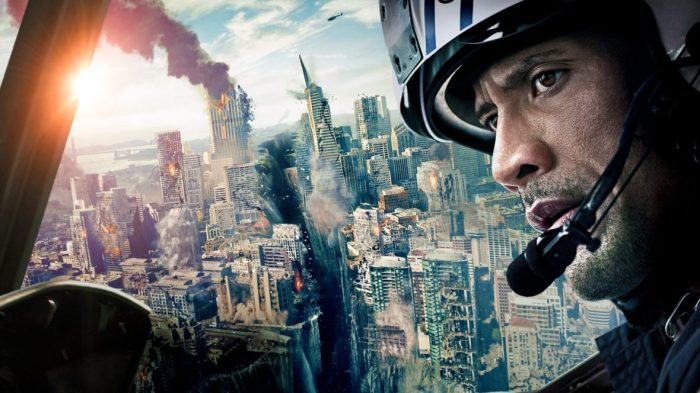 The Rock watching everything crash

Finally, the family reconnects. The entire west coast is smoldering ruins covered by about half the Pacific Ocean. There isn’t a bridge, a building … nothing. Total, absolute devastation everywhere.

Garry is giggling to himself.  Because he knows. I know. We both know. It’s coming.

The Rock, arm around his wife, his daughter saved, is gazing over the wreckage of the world and Garry murmurs … “Now, we rebuild.”

And THEN The Rock says: “Now, we rebuild.”

Garry collapsed into laughter. The last time he laughed that much was when Trevor Noah had Ben Carson on the show and Trevor did a better Ben Carson than Ben Carson. Garry was still howling while the credits rolled.

We’d seen the world end. We’d see the best, the bravest. The worst. We’d seen the most depraved cowardice imaginable and in HD wide-screen.

But now, we rebuild. We have to rebuild … because … SAN ANDREAS 2 is coming! As the headline says, this will finally allow The Rock (who no longer calls himself “the Rock”, so you have to call him Dwayne) to punch an earthquake.

This is everything that we fear will result from climate change, but it all happens in one movie. I need to see this again. Especially how they rebuild a world that has been totally wiped out.

Like Loading...
‹ THE HOW AND WHY OF IMPEACHMENT – Reblog – THE SHINBONE STAR
HACKERS! WILD IN THE STREETS! – Marilyn Armstrong ›