As much as I hate telephones, I loathed pagers. I was, admittedly, spoiled by years of minimal interference in the field. We did the usual schtick on the 2-way. Hand over mouth responding, “We can’t hear you. You’re breaking up. We’re headed to the story. No landlines. Sorry, can’t hear you”. 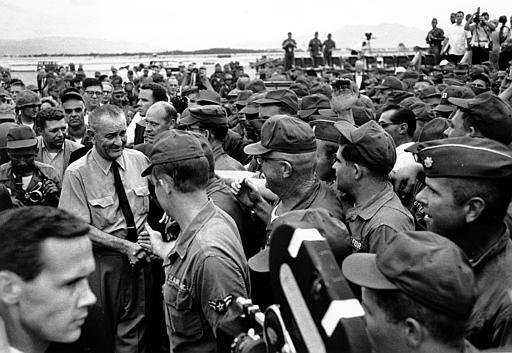 There was one phone call where I almost blew a major story and probably would have also blown my career at the same time. I was still working for ABC Network in New York. One night, around 3am, having just gotten home from a late shift and making my way home from Manhattan to Long Island. I took the call with an obvious attitude. The voice at the other end was nonplussed.

“Garry, don’t pull any of your BS. You really want to hear this call.”

Heavy breathing from me.

“This is a good one! They want to send you to Vietnam with the team …” In essence, they wanted me to go as a grunt back-up to the A-list correspondents. President Johnson was in Vietnam and something “big” was expected.

“Are you serious or is this a bad joke?” I finally asked.

“No joke, Garry. They like your ballsy attitude and think you’ll be a good fit with the ‘old guys.’”

“Yeah, Garry, that’s right. Grab some of your old Marine gear and get your ass in ASAP. There’s a debrief and then you’re on a special flight to Saigon.”

“Okay, thanks for the heads up, round eyes.” Laughter on both sides of the call. I grabbed some of my old gyrene gear and headed to the door.

My mom yelled, “Garry, where are you going, NOW?”

I heard Mom yell, “What?” as I headed out the door and into an exciting new chapter in my life. Glad I took that call.