Let me start off by saying that this morning, Owen and I were treated to seeing a relatively rare Pileated Woodpecker. They are the largest of our living woodpeckers and while I knew we had one or more of them in our woods, I never saw them from close up. They would just fly by and stop far away, well beyond my camera’s ability to take a picture.

And this is exactly what he looked like. This is NOT my picture. My camera was in the other room and if I’d gone to get it, he’d have been gone by the time I got back. But at least two of us saw him!

This time, he landed on a tree right on the front of the house! I called Owen and said “Look, look! It’s that big woodpecker!” Big he was. The size of a medium-sized hawk with that unmistakable hammer-shaped scarlet head. The bird after whom Woody Woodpecker was designed. 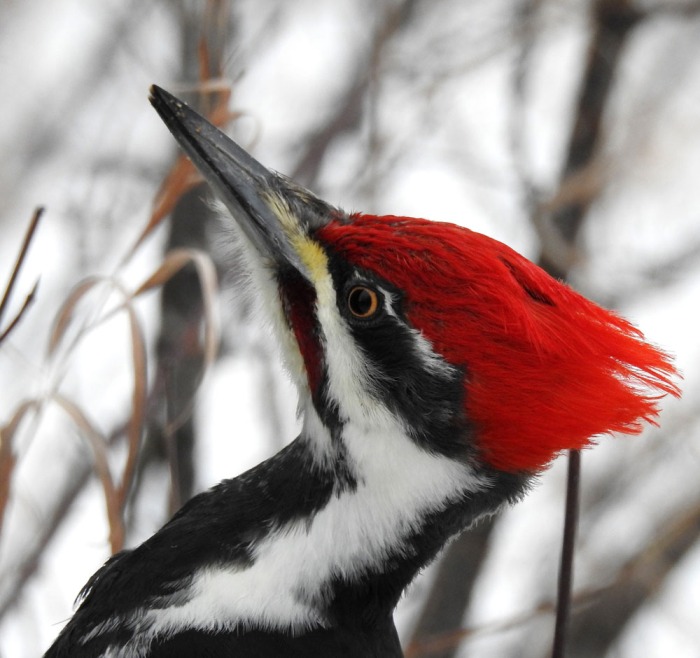 Pileated-Woodpecker – Head shot (I didn’t take this picture, either).

It was inspiring, so I went and developed some more “artistic” pictures of birds. I don’t know why seeing that big red-headed bird was inspiring, but it was. They are becoming increasingly rare. There was an even bigger one — the Ivory Woodpecker, but they are believed to be extinct now.

These guys are disappearing too. They need deep woods in which to live and there’s precious little remaining. New England still has a lot of trees, but every day, they chop up another woods to built cheesy houses for which they are asking way too much money … and this is not a hot property area. Many of them take a long time to become occupied, but the woods is gone forever.

Pileated Woodpeckers don’t like people and cars and dogs. They like forest and I fear they will go extinct too. 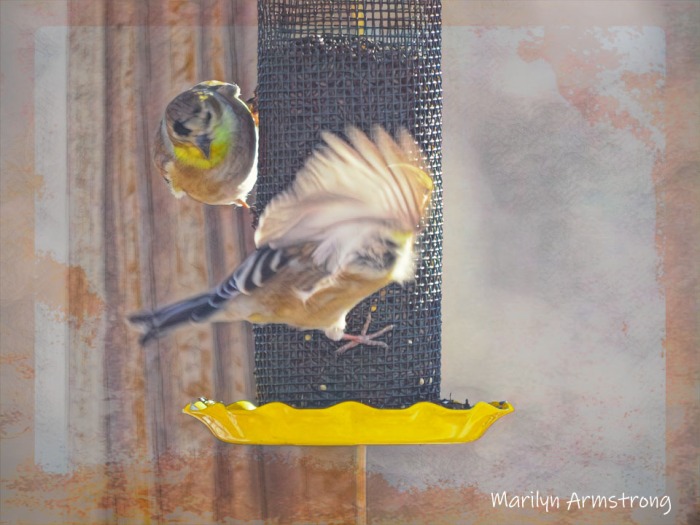 Wings and a prayer? Goldfinch feeding up.

More wings and prayers – one Goldfinch in the air and a Nuthatch on the feeder.

I hope next time the big woodpecker comes by, I hope he stops to pose for me!