IT’S NOW PERSONAL. TIME FOR A ‘GIVE ME FREEDOM FROM TRUMP’ MOMENT – SHINBONE STAR REBLOG – WRITTEN BY MACINELLI

IT’S PERSONAL.
TIME FOR A ‘GIVE ME FREEDOM FROM TRUMP’ MOMENT
WRITTEN BY MACINELLI 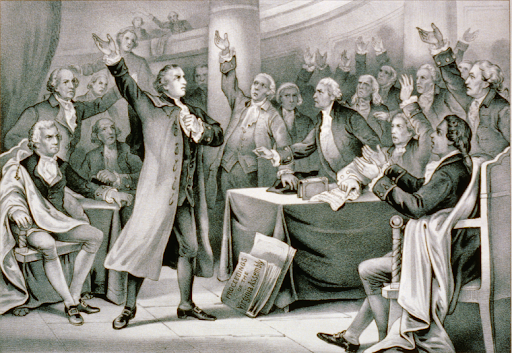 As an old-school journalist — just the facts please — and a descendant of Revolutionary War-era orator extraordinaire Patrick Henry (I’m related to one of his brothers, not the man himself), I accepted an invitation by the founder of The Shinbone Star to craft articles expressing my views on the state of our nation with Impeached President Donald J. Trump occupying the Oval Office.

Unlike my long-ago ancestor, however, I promised myself not to fire off personal rhetorical attacks against Trump designed to encourage my fellow citizens to revolt against this corrupt administration.

Instead, my posts provided truth when Trump lied; facts when he foisted fiction surrounding his anti-American actions; and pleas for standing up against his warped sense of patriotism as he deconstructed our country, executive order by executive order.

There were no “give me liberty or give me death” ultimatums on any of my more than 130 items written for The Shinbone during the past three years.

It’s time — no, past time — for a revolution in our country against Trump and his anti-American, anti-Christian, anti-human form of government. The emperor has been laid bare — he wears no clothes, he possesses no heart — by the deadly COVID-19 disease that has so far killed more than 700 Americans with thousands more in danger of dying before a light can be seen at the end of a tunnel.

Trump’s inaction earlier this year when the virus first appeared on the world stage and his determination to make little of the deadly impact about to wash over our country and wipe out millions of jobs was criminal and intended solely to promote his re-election campaign.

It’s time now for me to borrow from Patrick Henry’s famous speech:

I know not what course others may take but as for me give me freedom from Trump who wants to be king or give me death.

Turn off the White House press room cameras. Shut down his self-promotional, lie-infested media briefings used to paint a picture of our coronavirus infected country coming back to life by Easter Sunday. Ignore his false pronouncements about all the “great” work he has done.

None of it is true. He is criminally lying, building false hopes among his political base and many frightened Americans, with his nightly misinformation campaign.

Laugh out loud and often as he challenges medical and scientific authorities on just how long the coronavirus will be with us and how many Americans will die before this callous man, this sorry excuse for a president, will be tossed on the garbage heap of history as someone more worried about staying in office — and out of jail — than the deaths of our citizens.

Trump should also be remembered as the man who — with states struggling to do battle on the front lines against coronavirus — somewhat jokingly told governors of those states that they had better treat him well if they expected to get any federal help in their fight to save their citizens’ lives.

Even half-joking, I want freedom from this man who would say anything even close to that to public servants trying desperately to minimize the death count. Someone find a legal way to shut down this soul-less, this inhuman person passing himself off as the leader of the free world, the promoter of a republic, a democracy founded on the principle of government by and for the people of this once great nation.

During this perilous time, we need leadership that understands the enemy attacking us, how that evil invisible force is disrupting our way of life, killing loved ones indiscriminately, putting at risk the lives of heroic men and women — doctors, nurses, hospital staffs, first responders — charged with leading our counterattack against the virus.

Trump needs to go today. Not tomorrow. Not in November. Today.

I want freedom from Trump today. Is anyone with me? Is anyone out there listening?

Here’s how my ancestor, Patrick Henry, summed up his desire for liberty and freedom from the king of England nearly 250 years ago:

“Gentlemen may cry, Peace, Peace– but there is no peace. The war is actually begun! The next gale that sweeps from the north will bring to our ears the clash of resounding arms! Our brethren are already in the field! Why stand we here idle? What is it that gentlemen wish? What would they have? Is life so dear, or peace so sweet, as to be purchased at the price of chains and slavery?

“Forbid it, Almighty God! I know not what course others may take; but as for me, give me liberty or give me death!” — Patrick Henry, March 23, 1775

PLEASE CLICK HERE TO VISIT THE ORIGINAL POST ON THE SHINBONE STAR WHERE YOU WILL FIND MANY GREAT POSTS WRITTEN BY
EXTRAORDINARY JOURNALISTS.

Like Loading...
‹ COVID-19 body count is just a numbers game to Trump
DONALD TRUMP GETS CONFUSED BETWEEN TOM BRADY AND CORONAVIRUS – DA NOOZE ›