Most people assume that the nuclear family is the natural and best environment for bringing up children. We probably also assume that it’s been the norm forever. But both assumptions are wrong. Both historically and cross-culturally the extended family – multiple generations living together and sharing responsibilities – is in fact the most common social arrangement. Remember the phrase, “It takes a village to raise a child”?

The nuclear family only became widespread after the Industrial Revolution created a factory based, centralized economy. This type of economy favored the smaller, nuclear family unit because it could more easily pick up and move to wherever the work was. In the scenario that gave birth to the nuclear family, husbands’ incomes alone could support the whole family. For the first time in history, wives were able to stay home and run the household and care for the children full time, on their own.

The problem with this family structure today is that one income can no longer support most households and most wives also have to work outside of the home. However, children and aging parents still have to be cared for and this creates a vicious circle. Parents have to pay a big chunk of their income to caregivers for their children (nannies or au pairs, daycare centers, etc.) and must also often help their parents afford retirement communities, home health care, or nursing homes. Then the people caring for YOUR children and parents have to pay people to take care of THEIR children and parents, and so on. 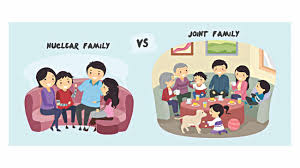 In 1940, 25% of Americans lived in multi-generational homes, with grandparents helping to care for young children and later older kids helping to care for the aging grandparents. By 1980, only 12% of Americans lived in inter-generational homes. But after the Great Recession of 2008, economic necessity brought that number back to 18%.

The current Coronavirus pandemic has highlighted the fact that our society today farms out and isolates our older population and puts unrealistic pressures on the nuclear family unit. Maybe now is a good time for another resurgence of the interdependence of the generations.

We have idealized ‘independence’ for a long time; the independence of the parent-child unit despite huge logistical and economic hurdles and the independence of the older generation who are proud to be able to make it on their own, despite loneliness, isolation, and often a huge price tag. It seems clearer now how dysfunctional the separation of the generations can be for a vast number of families.

With good childcare hard to find and prohibitively expensive, it’s a no brainer that willing and able grandparents could be invaluable to cut costs and increase the quality of their grandchildren’s care, at least part-time, while their children work. This may not always be feasible. I would not have let my in-laws spend that much time with my kids unless they promised to pay all the psychiatric bills that that would have engendered. And my mother was too busy living her own life to even occasionally babysit for my kids (she ‘visited’ with them at her convenience).

On the other hand, I have a friend whose daughter has three kids ages six, four, and two-and-a-half. She normally helps her daughter out a few days a week, but since the shelter in place order in Connecticut, my friend and her husband have been spending all day, every day helping their totally overwhelmed, home-bound daughter. Another friend moved down the street from their daughter so they could help out regularly with her special needs daughter. My husband and I were lucky enough to have had grandparents as a big part of our lives growing up and in turn, we helped care for them when they got older. It was a win, win for everyone involved, and enriched all of our lives.

It might take a while to trend back to extended families living together, or at least close by, on a larger scale. First, attitudes have to change back to valuing the extended family lifestyle. That may begin to happen seeing how both young families and seniors are struggling with financial and emotional stress today. Inter-generational families may be seen as a solution to today’s problems for future generations. Instead of the ‘sandwich generation’, balancing children and aging parents separately but at the same time, the extended family brings everyone together to help each other through all stages of life.

In the meantime, the government can ease the situation for younger parents by guaranteeing paid parental leave and also access to high-quality child care for everyone. That still leaves older people alone with their children helping with their care as best they can. But at least it could give young families a breather while we all figure out what type of family structure works best for everyone in today’s world.