Garry had a get-together with a bunch of retired media guys. They meet every few weeks, but for obvious reasons, it hasn’t happened recently. So a while ago, someone came up with the idea of doing a Zoom meeting. Despite that all these men worked on television for many years, most (but not all) had issues making Zoom work.

It’s amazing how quickly we forget things we used to know … and how suddenly we realize we never learned it because it wasn’t what we were doing professionally. For me, computers were my business, so despite what I’ve forgotten, I remember them quickly when reminded.

From The New York Times:

“When will the Covid-19 pandemic end? And how?

According to historians, pandemics typically have two types of endings: the medical, which occurs when the incidence and death rates plummet, and the social, when the epidemic of fear about the disease wanes.

“When people ask, ‘When will this end?,’ they are asking about the social ending,” said Dr. Jeremy Greene, a historian of medicine at Johns Hopkins.

In other words, an end can occur not because a disease has been vanquished but because people grow tired of panic mode and learn to live with a disease. Allan Brandt, a Harvard historian, said something similar was happening with Covid-19: “As we have seen in the debate about opening the economy, many questions about the so-called end are determined not by medical and public health data but by sociopolitical processes.

Endings “are very, very messy,” said Dora Vargha, a historian at the University of Exeter. “Looking back, we have a weak narrative. For whom does the epidemic end, and who gets to say?” 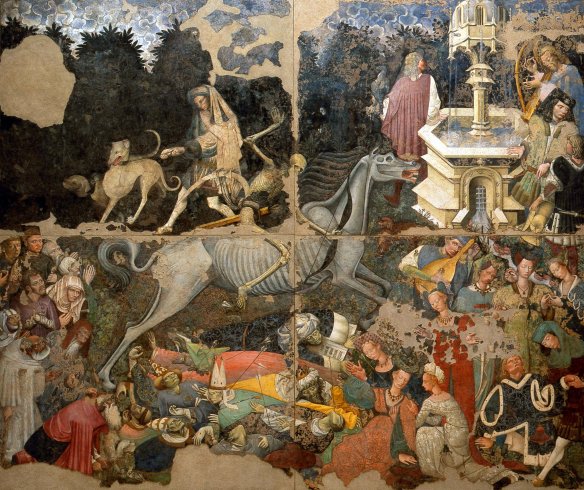 A Sicilian fresco from 1445. In the previous century, the Black Death killed at least a third of Europe’s population. Credit: Werner Forman/Universal Images Group/Getty Images

Once everyone started talking, the subject came up. The one about which so many of we retired people have been thinking, but afraid to even ask because it might be a jinx.  What happens to us? We are the most vulnerable and a lot of people in this country think we lived long enough and would be perfectly happy to let us all die off.

What will the world be “when this is over.” That brought up the real question: “Will this ever be over? Can they make a vaccine soon enough (or at all) so that we can think about traveling? Would any of us willingly get back on an airplane? How about a simple local vacation? What is safe? Where is the danger

There was a universal “no” on flying. I used to get sick every time I flew long before the epidemic. All that recycled air. One person sneezes and by the time I got off the flight, I was already sick.

This is pretty disheartening. I always thought as a nation, as a people, we were a lot smarter than we seem. But, maybe all this dumbness is not true stupidity but denial. Many people REALLY REALLY REALLY don’t want to know what’s going on. When they are told the truth, they angrily reject it. The truth is unacceptable. The truth hurts. The truth is ugly.

They are desperately afraid of the new reality in which they are living and for many people, in which they were already living, even before Coronavirus arrived to make it overwhelmingly worse.

Sometimes, when everything is gone, when there’s no money, no work, and virtually no hope, denial is your best weapon. It might be your only weapon.