Full disclosure upfront. I never met Jimmy Stewart. No interviews. No emails. No phone conversations. But I’ve got Jimmy Stewart in my brain, maybe because Stewart is TCM’s “Star of the month.” They’ve been airing most of the legendary star’s films from the ’30s through the ’80s. There was a masterful Stewart profile hosted by Stewart’s good friend, Johnny Carson. He made it feel like two buddies reminiscing about the best years of their lives. 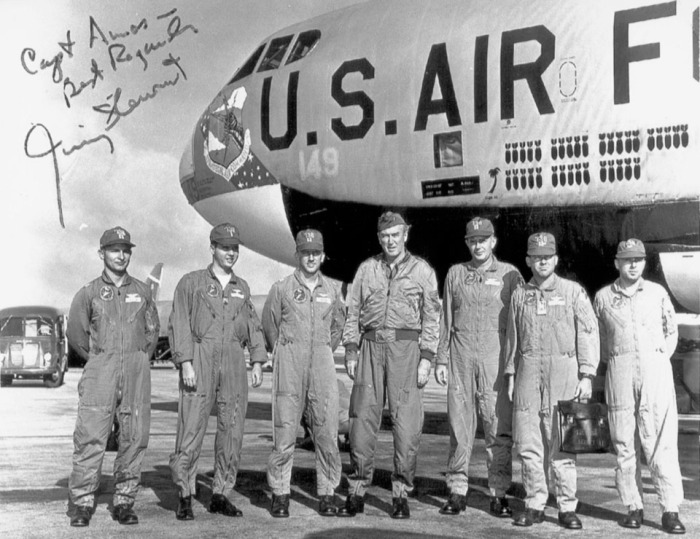 Stewart, (center) with Amos on his right, and the B-52 crew moments after safely landing at Andersen. Before leaving Guam the next morning, Stewart again thanked Amos for his professionalism during the emergency and presented him with signed prints for each of the crewmen. (Courtesy Bob Amos)

The other night might have been my first (Yes!) viewing of 1954’s “The Glenn Miller Story.” Somehow, “The Miller Story” escaped me during those years when I went to the movies 3 or more times a week. I absolutely enjoyed the warmth and nostalgia of the movie in a way I rarely feel about contemporary films. I’ve been steadily humming “Moonlight Serenade” for the last two or three days.

Jimmy Stewart is stuck in my mind. I’m doing an interview with him — but it never really occurred. I’ve been digging through my mental folders and files for why I feel this link to Stewart. I’m aware of all his unforgettable film performances, from “Mr. Smith” to “Wonderful Life” to “Harvey.” And all those rugged 1950s and 1960s westerns — including “The Man Who Shot Liberty Valance.”

I couldn’t find that link.  It’s more than just the fan and movie maven thing going on.  What was it?

It hit me as I was cleaning my hearing aids. The answer!

During the late 1980s — maybe 1988 or 1989 — during Ronald Reagan’s second term in the White House, life was changing for me. Marilyn was back in my life after spending almost a decade in Israel. And I finally was able to wear the new, smaller hearing aids that are nearly invisible to onlookers.

I was elated!  No more of those ugly, big hearing aids. I was always sure people stared at them while I worked on local TV News. That was when I remembered — a conversation I had with a colleague. She was the station’s entertainment reporter and had noticed me talking to myself as I checked the audio of my tiny new hearing aids with a big smile on my face.

I was in the middle of covering a major trial that was getting international attention. I saw my image on network news shows. No hearing aids were visible. Oh, the vanity! I explained to my colleague what the tiny hearing aids meant to me. How I’d coped with a major hearing loss most of my life and the adjustments I had made to succeed in TV News.  She was genuinely surprised and smiled with an appreciative tap on my shoulder. We’d sat close to each other in the newsroom for months, talked about business and personal things — but I’d never mentioned my hearing loss. 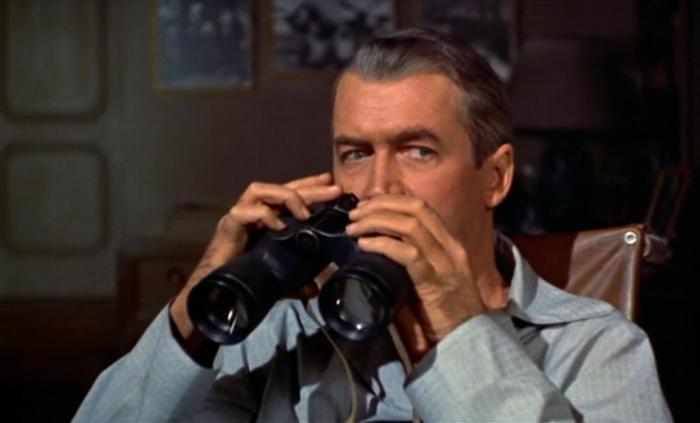 That was also the summer Marilyn and I entertained actress Patricia Neal and legendary photographer Alfred Eisenstadt at our Martha’s Vineyard cottage, a rented place we shared with other TV news friends. Word of our friendship with Neal and Eisenstadt made the rounds in the local entertainment news world. I remember sharing stories with my entertainment reporter colleague. Sometimes name dropping can be a lot of fun … and this was one of those times.

“I met Jimmy Stewart at a Washington, D.C. cocktail party,” my colleague told me one afternoon. She had my complete attention.  “Poor Jimmy. He was struggling with his gigantic hearings aids.”

I listened with fascination. I didn’t know Jimmy Stewart needed hearing aids. It never showed in his movies or TV interviews. I listened closely for details on Stewart’s dilemma.

“Jimmy couldn’t hear what was being said at the party,” my colleague told me, “He kept looking at me awkwardly and fumbled with the conversation.”

I had an epiphany.  Jimmy Stewart fumbled with a conversation because he was trying to absorb and register what people were saying to him. The famous Jimmy Stewart verbal fumble was his way of coping with hearing problems. I probably smiled to myself as my colleague went on with her description of Jimmy Stewart’s cocktail party struggles. Fascination turned to compassion as I imagined myself in Stewart’s place, trying to filter our multiple conversations, loud music, and ambient background noise.

The Stewart story quickly faded out from my mind as I returned to my story and a pressing news deadline.

There was a letter on my desk a few days later. I was running late for the trial and was worried about getting a good seat so I could hear the lawyers and the judge,, so I didn’t get to it that day.

Trials were always a major headache for me. Years earlier, I’d taken my situation to myriad judges, court officers, and lawyers. I wanted everyone to know I was working with this handicap and wanted to be sure I got all their wise words accurately. They appreciated my candor and efforts were made to make sure I could get the information accurately and efficiently.  My best, most sincere face helped my cause. If you’ve heard this from me before, know it was the prologue for my relationship with Jimmy Stewart.

I finally opened the letter a day or two after it arrived. I was immediately suspicious. Phony, threatening, and suggestive letters are common for a TV news reporter. This one wasn’t in thick crayon or illegible ink scrawl, but I was still suspicious.

I hope you don’t mind my assumption of friendship since we’ve never met. I deal with this business of celebrity all the time and it is presumptuous.”

I continued to read with skepticism until I realized this missive was from Jimmy Stewart. He went on to explain his cocktail party hearing problems, his encounter with my colleague who apparently talked about me and my hearing problems. Jimmy Stewart heard about this Garry Armstrong guy who was a success on Boston television news despite hearing problems. I blushed a little as I read Stewart’s account of my bravery. Most of the letter, however, dealt with Stewart’s details about his hearing aids, its components. He wanted my take on the efficiency of these new little hearing aids.

I put the letter in my desk, planning to take it home and show to Marilyn because I wasn’t good at holding on to such possessions in my professional life. My attention turned to the trial and my report for the six o’clock news.

Fast forward several hours, including my ritual, stop at the local bar before heading home — without the letter. Out of sight and mind.

I did manage to write Jimmy Stewart a few days later. I spent most of the letter talking about how I struggled with my hearing and the use of the aids. I must have appeared awfully vain, talking about overcoming my reluctance to wear hearing aids because I thought it was a stigma. My vanity was probably also obvious when I mentioned some of Stewart’s colleagues I’d met in my career.  I was young and lacked humility, telling Stewart about time I’d spent with Katherine Hepburn, Jimmy Cagney, Gregory Peck, and other stars. I forgot to mention the other stars, like Albert DiSalvo, Whitey Bulger, and Tip O’Neil.

In retrospect, I can only wonder what Jimmy Stewart thought as he read this silly, name dropping letter from a young Boston reporter.

Another Stewart letter arrived several days later. No indication of displeasure in my letter. He asked lots of questions about my hearing aids, my interview tact, and how I handled myself in large crowds. There was a hint of getting together when he came east again.

The meeting never occurred. Perhaps that’s why I’m now having these dreams about the sit-down interview that might have been.

Me and Jimmy Stewart. It never happened, but it could have. It almost happened.

Like Loading...
‹ The Devilish Deceptions Of “Warp Speed” Donald Trump – NAT HELMS
WORLD SHARING, SUCH AS IT IS – Marilyn Armstrong ›