BRING ON THE FRUITS AND VEGGIES – RICH PASCHALL

My father knew all the best buffet restaurants and Swedish Smorgasbords. For a few years, it was a frequent weekend adventure to accompany my father and his wife to a buffet restaurant. There are not as many of these restaurants as there used to be in our area, and we hope the Covid-19 doesn’t kill off the ones that are left.

After we would go through the food line and start eating all the food we had claimed, my father would usually comment that our eyes were larger than our stomachs. This was because it always seemed like we took too much food. It was odd to have eaten so much that we could not go back to get one of the many desserts. That happened to me a number of times. 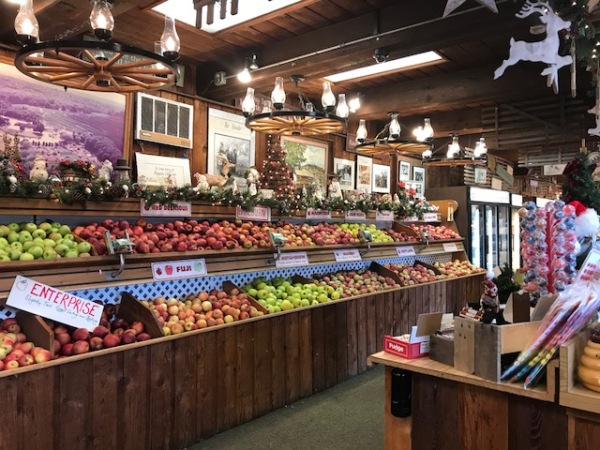 Apples and other fall fruits on display

It was the same when we went shopping. We were usually cautioned not to go to the supermarket when we were hungry. Our eyes would be bigger than our stomachs and we would put into the cart more things than we needed. This presented a particular problem when we picked up too many perishable products. According to my parents and grandparents, it was a bad thing not to eat the food on your plate or to buy things just to have to throw them away. “Don’t you know there are people starving in ________” (insert third world country here).

I get it. Those are really sad eyes when you have to throw food away. Yes, food has been abundant in this country and it is usually cheap, but no reason to toss it out.  And it may not remain inexpensive as we suffer through a global supply chain problem.

When you pick up those fruits and veggies at the supermarket, you may notice that they have colorful little stickers on them. They may indicate the company selling the goods (Dole, Del Monte, Chiquita, etc). They might have a Produce number to assist the checker when you reach the cash register. They also usually indicate where the item came from.

Your avocados likely came from Mexico. The bananas probably came from Guatemala, but may have come from Honduras or Ecuador. Yes, we do grow a lot of fruits and vegetables here, but how can fresh fruits and vegetables be in the stores year-round when the harvest season is short?  The rest of the year the goods come from other countries, mostly in South and Central America. In fact, more than half of the fruit sold here each year is imported.

Despite the ease of growing tomatoes, we imported 2.3 billion dollars worth from Mexico in 2018. We got them from other countries too. We do love tomatoes! We also got onions, peppers, cucumbers, and other fruits and vegetables from Mexico. Check your labels.

One-third of the vegetables are imported. Yes, we do export some fruits and vegetables, but we import three times as much. Now during this unique situation for global transportation, how do all of these goods get here? Yes, there are some airplane freighters flying to some countries, but that is nowhere near the amount of “lift” needed.

The major airlines of the world all have cargo divisions. Their small commuter planes may take small packages to their destination, but those large widebody passenger aircraft carry a large variety of goods. This is how many commodities move from country to country. What if the planes are not flying? There are not enough airline freighters in the world to move cargo around.

The passenger Boeing 777-300 cargo capacity is 24,000 kilos or 52,910 pounds for Americans. About two-thirds of the belly space is used for cargo on the widebody aircraft. Before Covid-19 a large number of air carriers were flying into every major city in the world. Some places now have no international flights, and some just a few. How do your fruits and vegetables get here? Without passengers, many airlines are not flying at all. A few maintain a limited schedule. Air Canada stated recently that they are flying at 5 percent capacity.

Some of the airlines are flying with just cargo. With no passenger revenue, they must charge a much higher rate to make the flight financially viable. Many places need to move their goods now but are reluctant to pay a significantly higher price. What is the market place to do?

If you are shipping a perishable commodity, you can not wait for prices to go down. You pay whatever rate will get your goods to market, or you let them spoil and throw them out. Plowing your crops into the ground is a sad alternative to paying higher transportation costs.

How will those South and Central American fruits and vegetables get to North America? Colombian airline Avianca, a major player in South America and carrier of goods and passengers to Miami, has declared bankruptcy.  The airline has not flown since mid-March. They hope to be in the air again soon, but what about the goods that need to fly now?

Some customers have arranged to sign a Blocked Space Agreement (BSA) and even pay an airline upfront to come into their city. This means they will pay for a certain amount of space on a flight whether they use it or not.  The airline can then attempt to sell the additional space, or space in the other direction in order to cover the remaining costs and turn a profit. What does this mean to you?

If the only alternative for our trading partners to sell their goods is to pay a higher price, then they will do it. The result of that will show up on the supermarket shelf soon.

Last week Air Canada ran an all-cargo flight to Avianca’s home town of Bogota. They will run another soon. They are also running a cargo flight to Buenos Aires and on to Santiago. There was also one to Punta Cana and Montego Bay this week. They will try to work with South American sales teams to maintain some of these routes. Other airlines are attempting all cargo runs as well. No one is offering to move things at pre-COVID-19 prices.

Sources: “A Surprising Amount of Your Fresh Fruit Actually Comes from Outside the U.S.,” by Abbey White, Food & Wine, foodandwine.com March 14, 2018.
“Top Imported Fruits Most Loved by Americans,” by Daniel Workman, World’s Top Experts, worldstopexpert.com April 18, 2020.
“Our Fleet & ULDs,” Air Canada Cargo, aircanada.com
“Some of the world’s airlines could go bankrupt because of the COVID-19 crisis, according to an aviation consultancy. See the carriers that have already collapsed because of the pandemic.” by David Slotnik, Business Insider, bussinesinsider.com May 12, 2020
See also: “The Global Supply Chain Disruption,” by Rich Paschall, SERENDIPITY, April 15, 2020.
“Sending and Receiving Stuff,” by Rich Paschall, SERENDIPITY, May 9, 2020.
Note: I worked in freight forwarding for 35 years. I have worked for Air Canada Cargo for the past year.