Home › Anecdote › THE JOY OF HANGING OUT — MARILYN ARMSTRONG

THE JOY OF HANGING OUT — MARILYN ARMSTRONG

Hanging out is a concept lost to modern youth, but the most fun times of my young years were spent hanging out. Too bad modern kids have lost it.

I was a teenager in college. Madly in love with my first boyfriend who was seriously into the “Village scene.” He brought me there for my first taste of cold chocolate at a MacDougal Street coffee shop. I took to the Village like the proverbial duck to water.

From the old Italian coffee houses that sold coffee along with a few other non-alcoholic drinks, to the tiny, dingy coffee houses where folk music was born, this was the Heart of Hip. Everything was a 15 cent subway ride from home.

The world was mine.

It wasn’t only the Village, either. A lot of New York was free back then.

Museums were free. The Metropolitan Museum of Art was a magical experience. For that matter, the huge New York Public Library behind the stone lions had basements full of original, ancient documents into which you could freely delve. You couldn’t take them out of the library, but they were free for you to absorb. (I have no idea if that’s true anymore.)

You could spend an afternoon at the Hayden Planetarium watching the stars. If you had just a little bit of money, afternoon plays on Broadway could be very cheap, especially if you could live with “standing room only.” In the afternoon, there were always seats available. A lot of things you pay big money, for now, weren’t expensive back when. This wasn’t just a matter of the change of the value of money through the years. It was a huge change in culture.

From Bob Dylan and Tom Paxton to Pete Seeger and Judy Collins … they were all there. The famous, soon to be famous and a few infamous people. All young, making music and passing the basket. 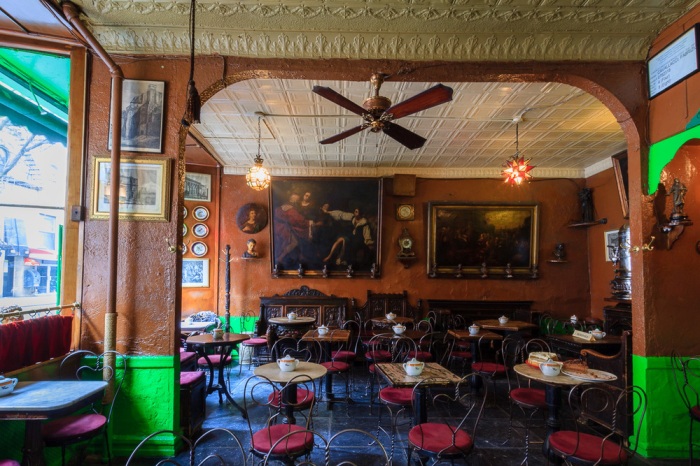 Caffe Reggio — the place where cappuccino (in America) was born.

I’d take the subway and get off at Bleecker Street, alone or in the company of friends. It didn’t matter whether you brought company or went by yourself. There were always people to meet. You didn’t need much money — good because none of us had any. We were kids, mostly without jobs and in school. Those of us not still living with parents lived in apartments shared with other people so we could make the rent and maybe afford food too.

All I needed was subway fare — 30 cents round trip — and a few more cents for a hot (or cold) chocolate at the Reggio. For this pittance, I could spend an entire day and evening in the Village. Hanging out.

“What do you mean “hanging out?” asks my granddaughter.

“You bought a coffee or a hot chocolate and just sat around waiting to see what might happen. You could read or watch people coming and going. Hoping you’d see someone you knew — or maybe wanted to know.”

“Yup. Just sat around. And we didn’t sit around with our cell phones because there were no such things. We just sat around. Talking or thinking or reading. It was a quiet place until the music started. That was hanging out. No one told you to hurry — or told you to buy something or leave. It was cool to simply be there.”

I often sat with a cup of coffee or chocolate for a whole day. No one pushed us out the door to make way for ‘the lunch crowd.’ No one bothered you unless you looked like you’d like some bothering.

When it got dark, you went to one of the places where people sang. There were usually no entry fees. Hopefully you had enough money to drop something in the basket for whoever was performing. It wasn’t particularly odd to have no money at all. A lot of us walked around with empty wallets. Without wallets, too. Rich was having exactly enough money to buy a coffee and subway tokens. It was okay in the 1960s. Poverty was cool.

Not only were there no cell phones. A lot of people had no phone. People rode bicycles with naked guitars strapped to their backs. Cars? I think most of us didn’t have driver’s licences. I know I didn’t. That was a decade in the future.

People were friendly, funny, and we were sure we were going to change the world. I think we did, though sometimes when I’m in a dour mood, I wonder if all we really did was make denim a fashion fabric.

Out near Hofstra in Hempstead, where I was occasionally attending school and getting far better grades than I deserved, I was a music major and one of the perks were free concert tickets to Carnegie Hall. There’s the “main room” — but there are also a number of “recital halls” where up and coming musicians perform. I’m hoping that’s still true.

Meanwhile, one of my soon-to-be husbands and his best friend decided to bring culture to Long Island. They opened the AbMaPHd (pronounced ab-ma-fid) coffee-house. It was a light-hearted reference to education — AB, MA, and Ph.D. Nobody got the joke.

They brought in the same people who were playing in the Village. Dave Van Ronk gave me my first good guitar strings. He even put them on the guitar for me.

Dave Van Ronk (back then)

What did I do there, in Hempstead? I hung out, of course. Sat around, meeting friends, drinking something, listening to music, meeting musicians. Hanging. I also played bridge upstairs in Memorial Hall instead of attending classes, but no one is perfect.

No one was texting, computing, or phoning. There was no electronic background noise (unless you count the squeal of feedback from the microphones). Nobody’s phone was beeping, dinging, or wailing. No one was going off into a corner to talk on the phone.

If you were going off into a corner, you were either making a date — remember dating? — or buying (or possibly selling) drugs.  All the noise was human. Talking, laughing, fighting, singing, discussing. Eating. Drinking.

It was an incredibly happy time for me, even though I thought I was deeply troubled, probably because I hadn’t really made the full breakaway from home to real life … and also because I’d read too many books about troubled youth and figured I must be one.

I know that whatever kids are doing today, they aren’t having nearly as much fun as we had. I feel sorry for them. We were adventurous, playful, willing to try anything at least once and most of us, more often. If I hadn’t been me during those years, I’d envy whoever had been the girl hanging out. If I miss anything of the “old days”? It’s hanging out. Just being there and doing nothing important.

Being there was enough.