Scotties can live a long time, though most pass some time between 12 and 16 years old. We lost Gibbs at the beginning of February, quietly, in his sleep on the sofa. Now, Bonnie is on her way to that land of rainbows. 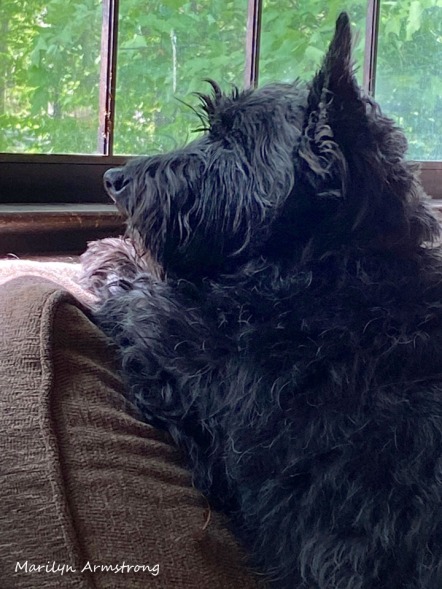 Usually, dogs develop an illness you know about. You can’t always make it better, but you can often control symptoms for a while. Often before a disease takes them down, arthritis makes them so miserable there’s little reason to keep a dog in obvious pain alive because you’re too selfish to let them go. We have learned the hard way over many years of having pets who we didn’t let go because we couldn’t make a decision — is wrong. 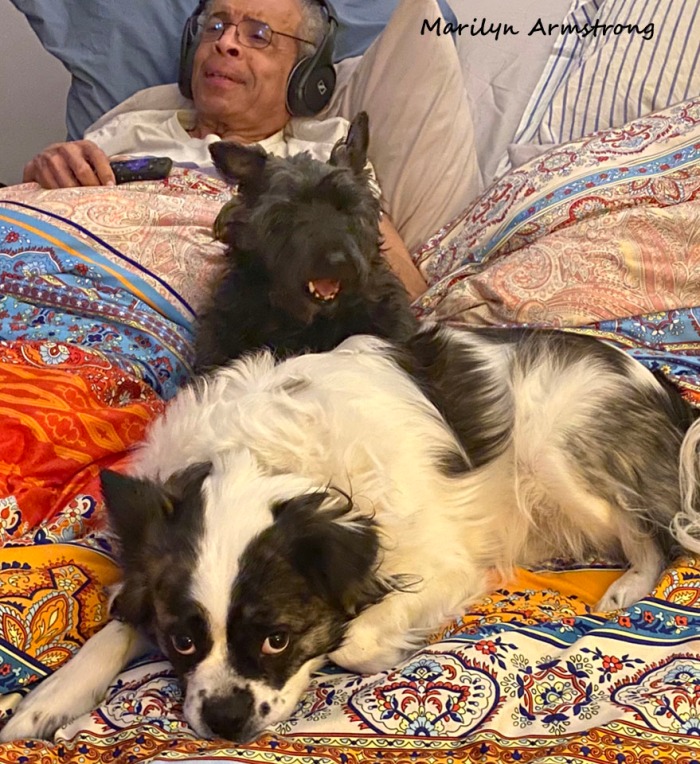 Bonnie has been failing a little at a time for a long time. Her eyes have been bad for much of her life, but even with a lot of attention, they are worse now. I do not know how much she can see.

She is almost entirely deaf. If you shout in her ear, she hears a bit and certain treble notes seem to reach her. But our voices aren’t there for her and it’s surprisingly difficult to manage a once-hearing dog who no longer can.

She has developed canine dementia. She has good days … or more to the point … she has good hours or minutes. The rest of the time, she’s agitated and barks continuously until she is exhausted and so are we. I doubt she knows why she is barking.

She also isn’t the same dog we’ve known and loved. Garry feels like he is reliving the last years of his mother’s life, but this time, it’s his Scottie and the conversation is limited.

She isn’t friendly and doesn’t want to be petted. She has about two minutes of tolerating being close to one of us. She isn’t hostile, but a lot of the time, I don’t think she is sure who we are or, for that matter, who she is. She knows the house, though. Even with limited sight and hearing, she can find her way around. And she can manage the stairs.

Her teeth went from fine a year and a half ago to appalling now. Assuming we could manage to find the nearly $1000 dollars it would cost to have most of them removed, that wouldn’t fix the rest of her. Her eyes won’t come back or her hearing. And her furry little brain isn’t going to uncloud.

It’s time to let her go.

The all-night barking is not doing much for Garry and my relationship either. We get very little sleep and we are tired and snappish a lot of the time. Three or four hours of sleep isn’t enough.

It’s hard to keep her in bed with us. Also, she is old enough that a jump from our rather high bed would likely break or tear something. The Duke will jump up and settle down, but Bonnie sleeps for only a few hours, then has to go out. Now she seems to be having trouble catching her breath. I don’t know what it means, but it isn’t good.

We finally decided that there’s not much for her or us to get from this relationship. She is so stressed and confused and this is causing us to stress, too. We aren’t spring chickens either.

It is hard to imagine life without her. She has been with us since she was 9-weeks old. She has been a wonderful dog. Funny, quirky, and full of fun. Last night, I took pictures. She still looks pretty good, though she has put on a lot of weight recently, maybe because she doesn’t do much anymore.

Sometime during the next week, she will be gone. It really is hard to imagine life without her. I still haven’t entirely become used to Gibbs being gone, and now, apparently, it’s time for another one to leave us.