I know this isn’t the sexiest subject on the Internet, but this morning, I had to explain to my furniture store from whom — at the beginning of June — we ordered a new loveseat. The one we sit in — ALL the time — is 15 years old and has more or less collapsed. Considering that we are home pretty much all the time, we need something to support our backs — and sturdy enough to not be done in by the Duke’s sharp, pointy feet.

They have no idea when I’ll get my sofa. I’m not in a hurry anyway, so it was more a matter of information than urgency. Rich Paschall has explained this to me and to you (if you read the posts), I explained it to her. She hadn’t understood it either and said she was grateful because customers get restless and don’t seem to understand why the world isn’t working like it used to.

Most people think the delays are (or were) because so many people are (were, will be) sick, but that was where it began. From then on, it is far more complicated and it is not repaired. Most places aren’t entirely sure how to repair it. Until it is finally fixed, it might be quite a long time  before we see the improvements, even if every airline and freight mover works as hard as they can to get it working. Old ideas need to be replaced, in some cases with older ideas we abandoned or changed to entirely new ways of doing things.

We won’t have an economy if we can’t move our goods. Forget about overseas shipping. Even shipping in this country — which is a very big country with many airports and uncounted numbers of roads — has a lot of moving to do.Living in New England, we are completely dependent on getting fruits and vegetables from California, Florida, and Mexico from November through April and often longer. By early summer, I’m drooling over the idea of a fresh orange.

Weather matters. Road conditions are critical.  That’s why public works — resurfacing, rebuilding roads and bridges — is a very big deal. It’s not just whether or not you get to work on time.

It’s also whether or not you have work to get to.

We need trains that run in addition to trucks, but we’ve never bothered to repair the tracks, so throughout the country, many direct routes are unusable. We have the trains, but the tracks are old and have not been maintained.

So, while wondering how come we don’t have our new recliner, we should ponder where it’s coming from and how it will somehow get from it’s point of manufacture to the shop in Uxbridge (where we bought it) and ultimately, to our living room.

So for all of you waiting for a shipment, I’m posting a list of three of Rich’s well-written, clearly explained posts about the shipping. How it is broken and how it is being resurrected — to the degree that it can be resurrected.

I’m sure most of you don’t read these pieces because they aren’t sexy or exciting, They won’t make you laugh, but it’s information you nee, whether you are running a business or dependent on those who do. Shipping affects everybody, from grocery stores to flower growers, and people who just want a new fridge.

No one has stopped making stuff … but getting it? That’s a whole other story.

3. BRING ON THE FRUITS AND VEGGIES – RICH PASCHALL

Considering that I had to explain this to my furniture company this morning what’s going on in the shipping industry, I’m pretty sure we all need to understand how complicated this process is. We’ve come to depend on getting everything as soon as we want it, whether it’s coming from China, England, or Australia.

The freight and shipping lines are broken. Like the damaged train tracks all over the U.S,, our supply lines are badly damaged. Restoring them to something like what we used to have won’t be instant. It will take time, cost big money, and require rethinking the process.

It’s a great opportunity for local farms, carpenters, builders … anyone whose business is close to its customers to do a major “reboot.” For everyone else, it’s the giant migraine of migraines. Be patient … or order locally, even if it costs more — assuming there IS a local manufacturer. When we moved all our manufacturing to Asia, a lot of things we all need went far away. I don’t think we make kitchen or laundry appliances anywhere in this country. When you aren’t buying it from a Chinese factory, it will cost more and try to remember even if it has an American brand name on it, that doesn’t mean it was made here or even on this continent.

On the other hand, it might be worth more, too. And you might get it during this lifetime.

A Photo a Week Challenge: Squirrel! 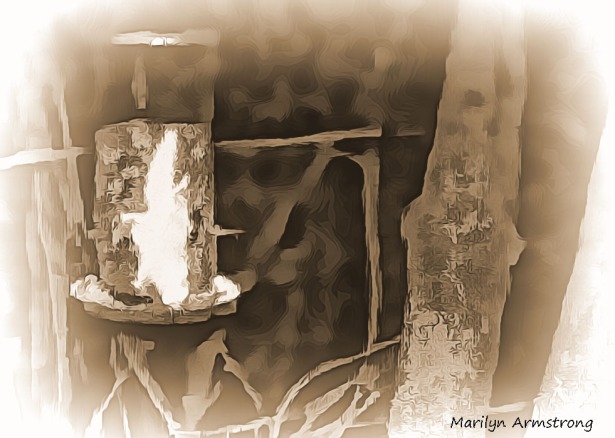 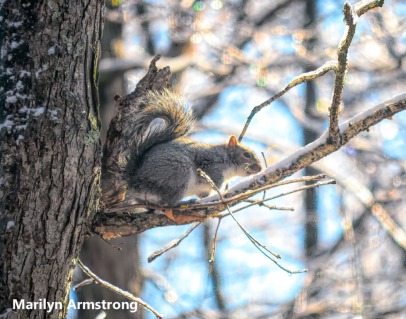 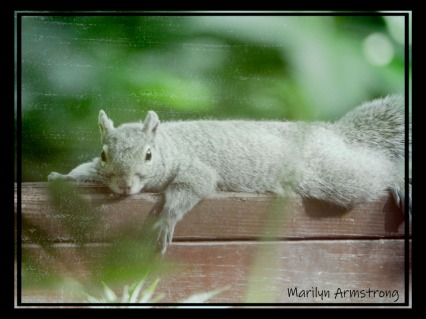 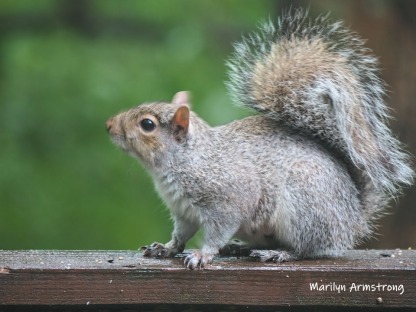 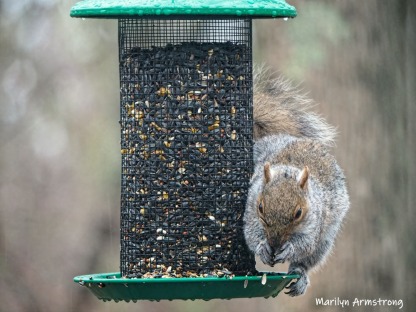 I took a few pictures. I had to take these pictures from quite a distance away because these are pretty tall trees. They don’t bloom until they are quite big.

I need to hear the sound.

Electronic tuners are silent. They find the right pitch, but they don’t make the entire instrument come together as a whole. That requires an ear. Preferably two. The chords have to sound right.

I often forget how many years I spent studying music because it was a long time ago and my hands can’t do what they used to do which was play the piano. Yes I still want music. Not just to listen to it but to make music. I can’t help it.

I thought I might “conquer” the ukulele, but there’s really nothing to conquer and honestly, if you don’t sing, there’s not a lot of fun in a uke. It’s all strumming. It wants people sitting around and singing — in or out of key — about wild mountains in Scotland or Ireland. Or West Virginia.

I’ve never seriously played a woodwind of any kind, except for a couple of years of flute in college. I wasn’t very good at it, but I wasn’t trying very hard either. I didn’t know how to play without a keyboard or maybe I didn’t want to play without a keyboard. Maybe both. It’s why I now spend so much time staring lovingly at Xylophones and Marimbas. Searching for the lost Vibraphone that should have been there. The only instruments I could afford I didn’t want. I wanted the $4000 Marimba. What a magnificent instrument that was.

If you can play a piano, you can ultimately also play a glockenspiel, xylophone, marimba, or vibraphone. The keyboard is the same. You have to do a little adapting, but you don’t have to strain your arthritic hands the same way.

The little tiny ones had YouTube footage and the treble clanging gave me an instant migraine. I do not think there is a real, wooden (the one I loved was made of rosewood) xylophone in my future and certainly not a marimba. Aside from being around the price of a small grand piano, where would I put it? Nonetheless, I can yearn.

This is all because I studied music as a child and as a young adult and even as Owen was growing up. He can still hum most of Chopin’s Mazurkas and a lot of Scott Joplin which was what I was playing when he was a little one. I thought he was sleeping, but it turned out, he was also listening.

Right now, he is having an instrument made for me by a friend of his who makes instruments. He is making me a cigar-box three-string non-electric guitar. I have no idea how one plays a three-string cigar-box guitar, but I’m sure I’ll figure it out.

I had to buy the cigar box and since I knew it was going to become the body of a guitar, I carefully picked one that was made of spruce — one of the woods that has a good ring to it. Just so you know, real cigar boxes are all made of cardboard these days.

So I bought a cigar-sized box and when it arrived, I pinged it and it sounded good. Soon, it will be an instrument. With frets and strings and tuning machines (not pegs — never got good at tuning with pegs). I have no idea what mine will look like. It’s a secret, but I’m ready.

If nothing else, isolation is making me creative in some very strange ways.

By the time I get my guitar, I may already be an expert playing a tin whistle. I could be the whole band if only I had a few more hands.