From the battleground, by Rich Paschall

You have probably quoted, or misquoted, the famous movie line. In fact, I would bet you have done it often. Do you know where it comes from? Have you seen the movie? If not, you have missed a gem.

“Bodges? We ain’t got no bodges. We don’t need no bodges. I don’t have to show you any stinkin’ bodges!”

The 1948 western film, The Treasure of Sierra Madre, stars Humphrey Bogart, Tim Holt, and Walter Houston. It was one of the first Hollywood films to be shot on location in a different country. They used many Mexican actors and extras. When our main characters are in the mountains prospecting for gold, a ragtag group who look like bandits come across the Americans. The leader announces they are the police. This causes Bogart to say, “If you’re the police, where are your badges?”

Well if you want to know what happens next, you will have to check out the movie. In fact, I have not seen it for decades and need to watch it again myself. It’s directed by John Houston who also directed Bogart in The Maltese Falcon. Houston won an Oscar for Best Director for Sierra Madre. His father, Walter Houston, also won an Oscar for Best Supporting Actor. The American Film Institute named it one of the best films of all time. 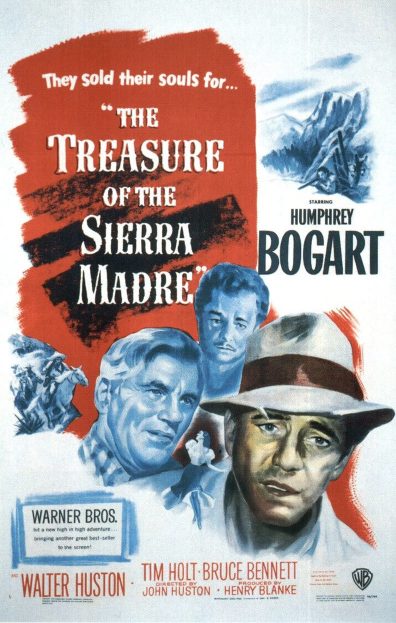 I was thinking about this recently after I got an email from the Chicago Department of Aviation (CDA). That was immediately followed by an email from my employer, an airline I have mentioned to you in the past. The topic of these emails? Badges!

Technically I have an airport job, although I had not been to the airport since March 13. On that date, we were told to take whatever we thought we needed to do our jobs from home and not come back. Our group packed up and left. 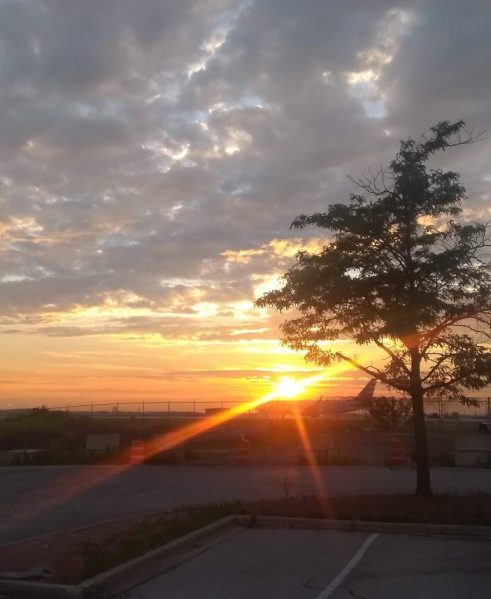 The cargo building has a nice office that was remodeled at the end of last year. It is not near the terminal buildings and is in fact outside the fence along the east side. I had a very nice view of the east runway from where I usually parked my car.  Since the building is on the City of Chicago airport property, we of course needed airport badges!

My current “office” is a small table that is mounted to the wall in a corner of my kitchen. I guess it was meant for cozy little breakfasts since only two could sit there at a time. It is perfect for my computer because there is an outlet underneath the table and it just big enough for what I need. It is not as big or as nice as the work station in the cargo building, but it is away from a public building where people come and go all day.

At home, I have not been expecting the Transportation Security Administration (TSA), the Federal Aviation Administration (FAA), or the CDA to show up in my kitchen to ask to see my badge. (“If you work for the airline, where are your badges?”) This is something that could happen at the cargo building and the TSA does make the rounds, as does US Customs and Border Protection (CBP). If you are in a building that handles air freight, they really would like to know you belong there.

The problem with the official airport badge is that it has an expiration date. Every year! All of the people who work in any capacity at one of the world’s largest airports must go to the Badging Office in Terminal 3 every year to get a renewal. My time was up. I needed a new badge Even if I work from my kitchen for the next entire year, I needed to renew in case the TSA, FAA, CDA, or CBP showed up one morning for coffee (or covfefe) and asked to see my badge.

If I said I was not pleased with the thought of going to the cargo building to pick up my papers (“If you work for the airline, where are your papers?”) and then to a passenger terminal to get my badge, I would understate the obvious. But at the appointed hour one Friday this month, I got ready to go with my backpack filled with pills, water, mask, hand sanitizer, picture ID, and stinking badge. Off I went on a trip I had not made in 4 months. I picked up the papers, chatted with a colleague a bit, and headed out. 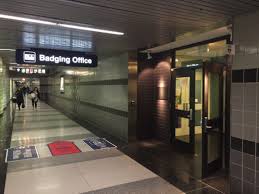 I was told the Badging Office would not be crowded. That was true since they only let in a few people at a time in order to maintain the mandated social distancing. This meant we had to stand in a line in the hall outside. A long line. Fortunately, I got in the line before it ran all the way to the back wall where a cluster of people was milling about.  I kept 6 feet behind the guy in front of me, but the woman behind me kept creeping up close behind. We were both wearing masks, but even so.

The “gentleman” in front of me never turned around so I did not see his face. He was wearing a camouflage baseball cap with an American flag on the back. He had “salt and pepper” hair, and dressed conservatively like he would be going hunting afterward. After standing in line for 20 to 30 minutes we were near the door when a TSA agent came up to the “gentleman” and said, “Excuse me, sir, do you have a mask?”

“Mask? We ain’t got no mask. We don’t need no masks. I don’t have to show you any stinkin’ masks!”

The agent walked away but came back in a few minutes. I believe other uniformed people were lurking near the door when the agent said, “Excuse me, sir, step out of line.” I thought we were going to have some additional entertainment at that point and I was prepared for some video. The gentleman was given two options. They could get him one of those single-use masks, or he could leave. I guess there was a third option. You may have seen their TV show, Chicago P.D. (CPD).

When I was leaving I saw him in the waiting area. He had pulled the mask off his face and it was down around his neck. This sort of thing is the reason some of us prefer to just stay home. Now, if the CPD, TSA, FAA, CDA, or CBP ask, I have my stinkin’ badge.