THE FREEDOM TO BE SELFISH – BY ELLIN CURLEY

So what is the problem with the anti-maskers? I understand that many of them believe that the entire Coronavirus is a hoax or a greatly exaggerated hype to sully Trump’s sterling reputation and political fortunes. But why are they arguing that their “freedom” is being encroached upon merely because they are being told to wear masks to protect OTHERS as well as themselves?

They equate the discomfort and/or inconvenience of wearing a mask when they don’t want to with ‘oppression’. They’re like toddlers having a tantrum, screaming “I don’t wanna do it!” But freedom has never meant doing whatever you want whenever you want to. Every society, even a democratic, ‘free’ society places limits on individual freedom. They have to. To function, any group must have rules, mores and customs that shape the behavior of it members. We say please and thank you and wait patiently in lines for our turn to do things.

No one complains that their freedom to push to the front of the line to get served first is being violated by this custom. So everyone, on some level, agrees to accept some kinds of restrictions on their behavior to get along in society. 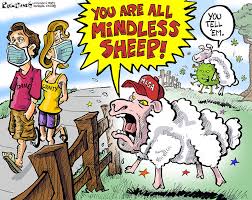 There’s a famous Supreme Court ruling that held that freedom of speech doesn’t extend to being able to yell “Fire!” in a crowded theater. That would be dangerous and potentially harmful to the group so it’s an acceptable limit on freedom of speech, one of our basic rights.

So why is being required to wear a mask to protect yourself AND others from a deadly virus, suddenly considered to be an unacceptable infringement on freedom? People don’t balk at wearing seat belts as a safety measure, though many did when the laws were first proposed and put into effect. Maybe the difference is that seat belts mainly protect YOU, while masks are to protect other people, not only you.

Do the anti-maskers feel that it’s their freedom to be selfish that’s being restricted? People have been caught on video screaming at employees who insist they wear masks in stores, refusing to put a mask on and even getting removed from stores by the security people or the police.

There’s another element in this situation, which is the Right’s obsession with people being allowed to refuse service to someone if doing so would violate their religious or personal beliefs. This exposes a deep hypocracy or inconsistency in the thinking on the right. If a baker doesn’t believe in gay marriage, he wants the right to refuse to bake a cake for a gay couple’s wedding. But at the same time, they don’t accept the fact that many vendors believe that masks have an important health benefit and therefore require people in their facility to wear them.

Even Trump people accept the “No shoes, no shirt, no service” signs that are everywhere. And that’s based on personal preferences and aesthetics, not issues of public health. Yet they not only won’t abide by the no mask rule in privately owned facilities, they often harass owners and workers in stores that require masks.

Since wearing masks is about safety and health, it’s a better comparison to the laws against drunk driving. Even people who drive drunk, accept the fact that they’ll be arrested and punished for doing it if caught. So they accept the state’s authority to make the law in the first place, restricting what the state sees as potentially harmful behavior. It doesn’t matter if you believe that you can drive perfectly well after drinking. You can’t make that argument to a cop. The ‘state’ or the ‘society’ has deemed that a certain behavior is for the good of the group and most people go along with it. Why is this situation so different from a freedom perspective? 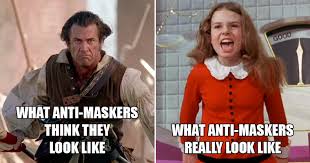 I guess it all boils down to the anti-science, conspiracy theory beliefs of Trump’s supporters, who think that they are the ‘real Americans.’ Somehow they feel that they have a right to defy the entities that believe different things than they do. Like the Confederacy that went to war to continue slavery, they are fighting a culture war to preserve the right to possibly infect others with COVID-19.

The same people who are anti-abortion and anti ‘choice’, are now proudly shouting, “My body, my choice!” I don’t know if irony is dead or is on speed dial! 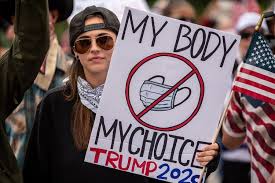