I actually didn’t know what the flower was until Judy Dykstra-Brown looked them up and told me. What has turned out to be so interesting is though the orchids in the pot flowered once and seem to have died, the Anthurium are flowering and seem to be exceptionally long-lasting. Also, they are flowering in a window that gets very little sunlight. I didn’t know you could grow flowers in that much shade. The brighter part of the window is where I have the orchids and Christmas cactuses. The anthurium lives at the other end of the double French doors, probably because in that same pot came a lot of shade-loving plants including ivy which has been growing like mad. I think there must be 10 or 12 feet of it. I have it coiled around a chair and the pot. I suppose sooner or later I’ll have to trim it, but it’s so healthy. I hate trimming healthy plants. 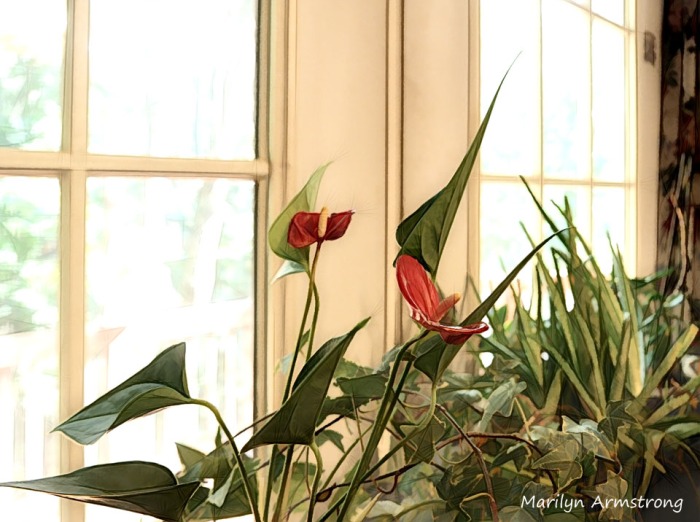 The anthurium are hard to photograph because of the light. During the hour or two when there IS sun, the brilliant red flowers glow and are hard to photograph. If I shoot them late in the day when the sun has moved to the other side of the house (northwest as opposed to northeast), it’s too dark to get detail. This is one of those times when I wish i hadn’t given away my indoor lights. I used to have a whole set including three 5-foot lights on stands plus a table stand and umbrellas for lighting bounce. I used them a lot when I was running an antique business online. Many of my pieces were small and lights were necessary. And of course, I sold a lot of dolls and the clothing needed lighting. Doll buyers were also very picky about the condition of hands and hair and facial paint. 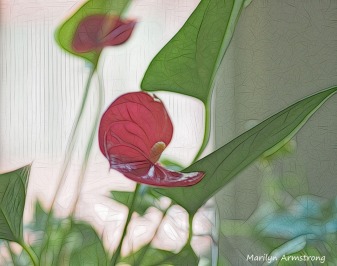 The other thing I sold a lot of were cast iron bookends and door stops. When I started buying them up, they were cheap. A year later, they weren’t cheap, but I had a huge stock of them. Most were made in the 1800s, but a huge number of were destroyed during World War I when they were gathering up metal to make whatever they were making.

And when 2008 rolled around, I packed it in. Nothing I sold could be called a necessity. It was all luxury stuff for collectors, but after 2008 and for a few years thereafter, no one had spare money and I had to pay for my “shop” on Ruby Lane. I bought a lot of my pottery for resale, but I couldn’t sell it. It wasn’t that people wouldn’t buy it. I just couldn’t sell it. A Han pot in perfect shape that’s a couple of thousand years old? Han was officially from 206 BC – 220 AD, the longest lasting Chinese dynasty. I also have Tang, Sui, Juan pieces and more. I had some other stuff that broke in a terrible crash — caused by me. I was cleaning and I stood up and my shoulder knocked two cabinets off the wall. I lost at least one Xing pot that was stunning and another from the Juan period that was certified. Most of my stuff isn’t certified because getting certification is expensive. It has been visually certified, but not laboratory tested.

Qing dynasty rice bowl, typically used by field workers. The blue chicken is a cultural thing. The bowl is almost 200 years old — and it isn’t even close to my oldest pieces of pottery.

That’s the story of my collections and why i have so much stuff … and why it is so hard to find homes for it. The people who were collecting it are now my age and I bet they are having trouble finding homes for their collectibles. Our kids don’t have houses and a lot of them have had trouble finding decent-paying work, even with college degrees. It turns out those college degrees aren’t worth quite as much as they were when i was growing up. They are probably worth even less now, at least in the job market. You have to have a skill that companies need. I could write – a saleable skill. 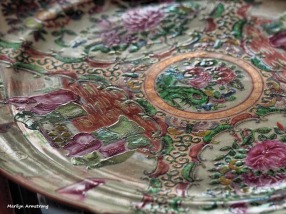 Sui musicians from long ago, restored

If I hadn’t had that skill, I’d have had to find some other field of endeavor. I warn kids to think carefully before investing huge amounts of money to get a degree that might not earn them a living. A degree in Medieval French literature isn’t a big job getter. With COVID-19, i have to wonder how this world will economically survive.

It’s a good time to be retired. A good time to be raising flowers and shooting pictures of birds. A bad time to be trying to build a career. Does anyone want to adopt a lot of hard-plastic strung dolls dating from the 1930s to the 1960s? How about caring for some very old Chinese pottery? Not looking for money. I just want it to be properly cared for and protected. It’s living history and I want it to survive.