The wild party went on all day and I’m assuming all night, though by then I was trying to catch some ZZZs after a week of watching vote counting. They all were there, Americans, masked. Body to body. Dancing. Drinking. Drinking more. Wine and champagne and everything in between. Let’s not forget the beer either. During one of the myriad live shots, Garry kept waiting for for one of the graduates of the Edie Williams/Carol Doda Drama Academy to show off her assets. He was disappointed, but he lives in hope.

We were betting this was going to be a very active night for “one” offers. We were betting that nine months down the line, there will be lots of babies, many of which will be named Joey, Biden, Kamala, Harris, and of course, Corona. Or who knows? Maybe Quarantine? In between, probably there will be far too many sick people. I hope they recover quickly. It would be such a pity to end all this joy on the dour note of a COVID-19 illness.

Are we going to rename the virus COVID-21? 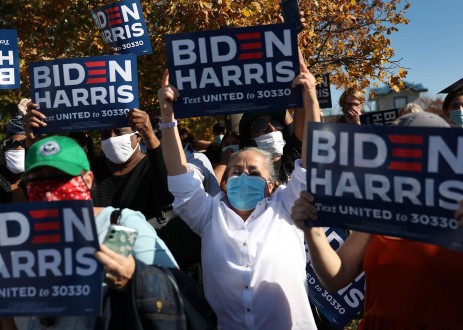 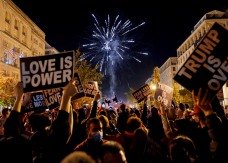 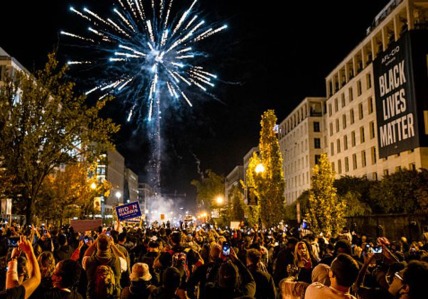 And meanwhile, back at the very White House, it fell to poor Jared Kushner to tell his father-in-law that “No really, sir, you LOST the election. Perhaps it’s time to say so to the American people?” Boy, talk about jobs no one wanted!

Information notwithstanding, Trump’s not ready to bow to the inevitable. There’s still 70 days of chaos yet to be sown and by golly, he’s gonna sow it. He may  not have won the election, but that doesn’t mean he can’t make a mess for others to clean up. Mr. Trump will ultimately need to recognize that an election occurred in which he lost by more than 20,000 votes every state but one and even in Georgia, he’s more than 4,000 votes behind. He is not going to beat that. No recount has ever yielded more than a couple of hundred or fewer votes. But on a more positive note, maybe fighting losing court battles will keep him busy and he won’t have time to try and dismantle the rest of America.

We are counting down the days. I don’t know what they are going to do about the inauguration. If it weren’t for the pandemic, it would be huge. Really huge.