LIVE FROM YOUR LIVING ROOM

OR FROM YOUR KITCHEN, by Rich Paschall

Years ago, decades actually, I would go see performers at a local piano bar. There were several I particularly liked and I tried to see them when they were playing one of the local venues. Some of those places are gone now, and some are just closed because of the pandemic. For the many performers who lived off the income of live performances around town or even around the country, how do they survive during the long winter of our quarantine?

If necessity is the mother of invention, then she has brought us a myriad of new performance options. Since you can’t go to the shows, they are coming to you. Online platforms have popped up across the internet to bring you live and recorded entertainment.

One of the local entertainers lodged in those past memory cells is Freddy Allen. Sometimes he played by himself, sometimes as the musical accompaniment to Amy Armstrong. Now Freddy does a live stream from Iowa where he lives, and Amy has provided entertainment from Puerto Vallerta. Freddy does the piano bar from his home on Tuesday nights via Facebook live stream. There is Jazz Brunch on Sunday morning (he’ll bring the jazz and you bring the brunch). There have also been live performances from The Grape Life, a lounge in Davenport, Iowa.

These performances are free on Facebook as are those of many other performers. Some have virtual “tip jars” where you can drop in a few dollars via PayPal or Venmo or another payment service the performer may list.

Onesti Entertainment, operators of the Arcada Theater in the suburban Chicago area, has provided entertainment from the theater, from a lounge they operate in the same building, and from performers who can not make it to Chicago for their appearance. Now they have established oshows.com to bring us performances from the theater. Last December I reviewed Leonid & Friends who I saw at the 94-year-old theater in St. Charles, IL.

This week AARP is providing its members a Joffrey Ballet performance of The Nutcracker. Goldstar, YouTube, Groupon are among those willing to sell you tickets at a reasonable rate for many shows. City Winery continues to provide shows. Last year I reviewed David Archuleta‘s show from the Chicago location. This year’s show has been delayed several times.

David is still performing. He has dropped performances onto his YouTube channel as well as appearing on other sites providing music. Since David could not take his Christmas show on tour as planned, he brought a live show to the internet. Stageit has been around since 2009. It was the online performance platform for artists that may not have been well known nationally.  Since the pandemic, they have attracted some performers who are well known. The artists may be coming to you from their home or from a studio. The artist sets the price from zero to whatever the market will bear. Some need to cover the production costs somehow and the ticket price is it. Performances are generally limited to 30 minutes with up to 20 minutes of encore time allowed.

David Archuleta brought a set of Christmas music to Stageit this past week. The songs were from David’s previous Christmas albums. The show was performed from a studio with a multi-camera setup and musicians. David explained that the ticket price was to pay the cost of such a show.

The fun thing about this is you can actually chat with the performer during the show. He can see a monitor with scrolling comments. I went to full screen most of the time to avoid the comments. They were scrolling by so fast I could not read them anyway. David tried to comment back to a few.

This week there will be a 60-minute benefit show, An American Heritage Christmas Special. David will perform his song with a full symphony orchestra and chorus. This special event is from some undisclosed “stunning winter Castle location.” Tickets are only 5 dollars for this. It is live pay per view television. The unique thing is Stageit does not allow these to be recorded. They are truly once in a lifetime shows. 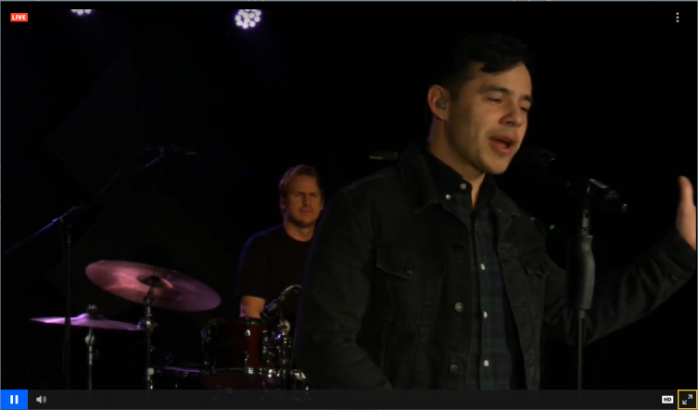 OK, you are not at a nightclub, theater, stadium, or even “stunning winter Castle location,” but you can purchase a ticket to a live event for a small price. Some of the events, especially the smaller ones, might allow you to interact with the performer. It is the best 2020 can offer. David’s March 2020 appearance at City Winery in Chicago has been rescheduled multiple times and is now in May of 2021. Let’s hope the virus is under control by then and we are back to seeing live shows in person.