PREDATOR AND PREY WITH BIRDS

Starting off tonight, I want to talk about this morning. I woke up to the sound of birds screaming. This is a warning scream and you almost never hear it unless there’s a predator on the loose. This time of year, none of the birds are nesting, so they are mobile. A ground predator — bobcat, fox, coyote, fisher (weasel) — is easy to avoid because they aren’t protecting babies in the nest. It had to be a hawk. There are two small, fast-flying hawks — Cooper’s Hawk and the Sharp-Shinned Hawk — who typically eat small birds and apparently prefer them. Larger hawks by preference hunt down slightly larger prey. Squirrel, chipmunks, rats and they don’t mind puppies, kitten, or even house cat and small dogs. I think the deer are safe. 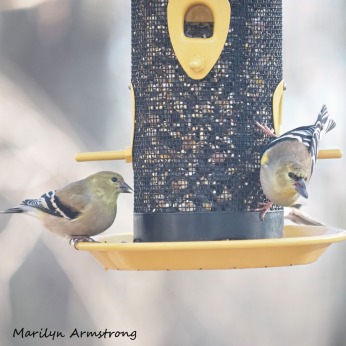 I couldn’t see the hawk at first, but I waited. Eventually, a big hawk (exact details are missing because I wasn’t wearing my glasses) emerged from the hedge where my birds like to hide and nest. Hawks can’t maneuver in that hedge. There’s no room for their big wings. This big hawk (red tail maybe?) wasn’t eating, so he didn’t get brunch. I get that birds — including predator birds — need to eat just like any other birds. I respect the right of wild for creatures to eat what they need. For such a big hawk to be hunting small birds suggests it has been a lean year for them. I gave my kids an extra special helping of black sunflower seeds. Incidentally, this possibly explains why I have not seen many squirrels — or chipmunks — recently. The hawks are hungry and overall, we have a lot more predators than prey.

We used to have rabbits, lots of chipmunks and squirrels and other small furry things. We no longer do. We have coyotes, bobcats, weasels (fishers). Raccoons who are both predators and prey — though these days, mostly prey. It’s hard to keep a balance when all these creatures live in such a small area. It looks big to us, but this section is maybe 100 acres total.