WORLD SHARING – WHAT A TIME!

Since last week, I don’t think I can even begin to describe what is and has been going on. We had an attempted coup by our Shining Orange Star, the fastest impeachment ever, making 45 the only prez to be impeached twice.

Locally, we still don’t have a viable plan for vaccinations in Massachusetts. It makes no sense because we haven’t even finished inoculating our first responders, much less older people or people with co-morbidities. At this rate, I may never get to go anywhere again — ever. Given the rapid development of the new, more communicable COVID virus, I think they need to do something already. It’s certainly not a lack of available facilities. We have many of the best medical facilities in the world. It’s a failure of leadership, starting at the very top with the disastrous failure to order enough vaccines or to distribute them appropriately — AND the Feds unwillingness to fund vaccine distribution. It has been followed up by apparent bewilderment by every part of our local government, from the governor (nice guy, big smile but I often wonder if other than smile, what exactly he does) to hospital administrators.

Now, questions. I always write this before I read anyone else’s answers so I won’t be influenced by what other people think.

Why do we dream?

There is a long and fairly complicated explanation which is very scientific, but doesn’t really tell us what we want to know. We REALLY want to know whether the things we dream mean anything. If we dream a number, should we bet on that number? If we dream of bears, are we healing? Are dreams just a mishmash of all the different experiences we’ve had since last we slept?

Brightly through the web of the dream catcher

I often dream using clips from movies, but not the real clip. My clip, starring Garry or me or someone I’ve never seen before. A dream can start off with what feels like a real plot, with a story that makes sense, or seems to make sense. Then, suddenly, they veer off into wild unreality. Dreams that don’t seem “bad” can leave you waking up feeling unhappy, sad, worried, and you can’t figure out why.

I’ve had dreams that warned me someone had died or some news that a tragic plane accident occurred. Nonetheless, I’ve had them. I can’t explain it and am not going to try. I know that, in addition to the mishmash of miscellaneous information that seems to form the biggest part of our dreams, there are other things that show up too — and some of them turn out to be real. Is it because our usual “daytime” protections are missing and we feel things we miss the rest of the time?

I don’t know. I don’t even have a good theory. I just know that stuff gets through in the deep sleep of dreaming that you will miss when you’re eyes are open.

Do you think a person’s name influences the person they become?

I haven’t the slightest idea. When I was six, I was sure if I had a romantic name, life would be much better. Today? Who knows?

Does hardship make a person stronger?

Hardship may make you tougher which might help you survive, but they don’t make you stronger. A little hardship can give you a push to succeed next time, but a long life of hardship doesn’t make you live longer or better. Unless you are lucky enough to have an unstoppable sense of humor, it makes you bitter, sick, depressed and eventually, dead too soon. I’m strongly in favor of making life easier and better. This is one of the platitudes I loathe. It’s a perfect excuse for treating other people badly.

Why do we judge ourselves by our intentions, but judge others by their actions?

I don’t judge anybody by their supposed intentions. The best of intentions go awry more often than not. It’s so easy to say “I meant well,” and then do little or nothing to change your intentions into accomplishments. It’s why I don’t make “bucket lists” or New Year’s resolutions. They’re just words. I judge everyone — including me — by actions and accomplishments.

Words are easy. Accomplishing something is a whole lot more complicated.

Getting the photograph you hoped to get but never thought you would! It might not sound like much, but trust me, it really is!

Pileated Woodpecker – A once in a lifetime set of photographs! 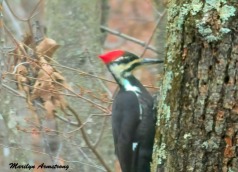 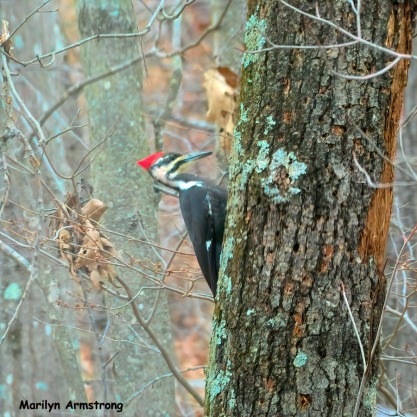