Yesterday, I made pasta and sauce. Owen had baked fresh bread the day before. There was one piece left and Garry came out of the kitchen clutching the bread while announcing, “I got the last piece of bread!” About 10 seconds later, Duke snagged the bread right out of his hand and ran away with it. It wouldn’t have been so bad if he had, at least, eaten the bread. He didn’t eat it . The Duke doesn’t like bread. He put it in his mouth and ran in and out of the house with it. I swear he stood in front of Garry and laughed at him while holding onto the bread.

Finally, at the end of the evening, he came up and dropped the bread into Garry’s lap. By that time, it had been out in the snow and dirt, on the floor, in the crate, and mostly, in Duke’s mouth, though maybe he thought he was returning it and now Garry would eat it. Dog’s have very different ideas of what’s yummy than most people. Or maybe he thought it was a toy and Garry would throw it for him. While Garry mumbled “you haven’t heard the last of this,” the Duke drifted off to sleep. He was happy. He stole the bread and he returned it. A kind of double whammy. 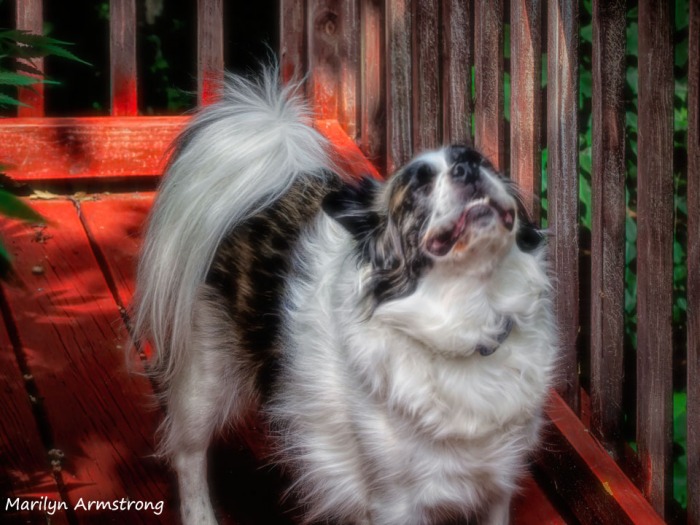 Do you think he took the bread just to taunt Garry with it? He never took a single bite out of it and he gave it back. That’s a dog with a sense of humor.

Right after I finished the first part of this post, the Duke stole a piece of freshly baked (well, boiled and baked) soft pretzel plus two prunes. I don’t know if he ate the pretzel. It was very salty. I’m pretty sure he ate the prunes, but shows no — uh — side effects. He also stole Owen’s underpants and two of my socks, but not a matched pair.

Usually, whatever is missing is in the crate. That’s the Duke’s cave and all his treasures are there. Owen did find his underpants. Not chewed up or anything. Just hidden. And he returned Garry’s bread, but he didn’t return either my prunes or my pretzel. He is becoming quite the thief. But it’s isn’t the usual hunger theft since he has no interest in eating the food.  He just steals it, runs around with it and grins with joy.

I also think he just discovered he likes snow. I know because there are clumps of snow all over the living room and kitchen. He wouldn’t stop running long enough for me to dry him off.

We have a deranged dog with sense of humor.

NOTE: Last night, we found the missing piece of pretzel. He did bring it back, but he left it on the floor in front of the sofa. What a good boy!