THE BEST RECIPE FOR CORNED BEEF

I did not write the original recipe. The author noted is Grace Jenkins. Wherever she is, this recipe really is as promised and made the best corned beef I’ve ever eaten.

Why am I talking about corned beef? Because we just passed St. Patrick’s Day. I’m not Irish. Garry is much more Irish than I am. Two of his grandparents are from Sligo, Ireland. Which is why he has freckles. I don’t celebrate St. Patrick’s day, but our grocery sells corned beef at half price before the holiday. They only let you buy three (though if you’ve got the energy, you can come back the next day and buy three more).

The author noted that cooking corned beef in a slow cooker always produces soggy corned beef, something I’ve noticed too. I cook it on top of the stove and poke it with a fork until it feels edible. I have also baked it rather than boiling it, which I like even better. This recipe calls for boiling it, slathering it with a glaze, then baking it. 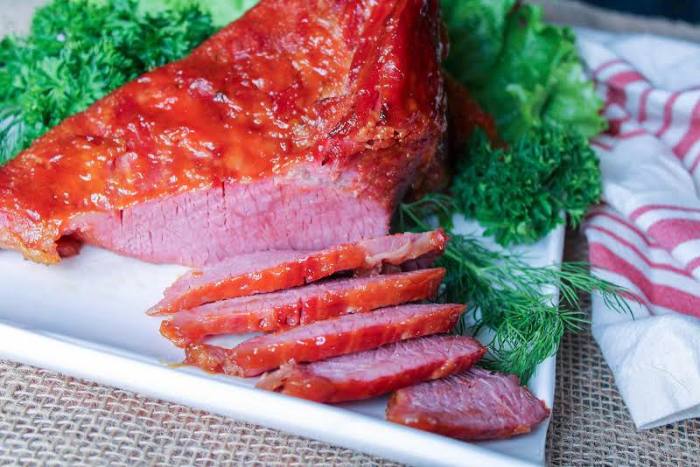 Grace Jenkins – “Just A Pinch” – Not my photo, but mine looked every bit as good. I wish I’d taken a picture!

From the author Grace Jenkins: (from “Just A Pinch“):

“This is a wonderful dish on St. Patrick’s Day, plus any leftover meat (NOTE: Leftover meat? You’re kidding, right?) makes great Reuben sandwiches. The meat is so tender and delicious your family will rave about it.”

My family is still raving about it. The glaze tastes very much like the sauce I make for cold shrimp except it’s a bit sweeter.

Put corned beef and contents of seasoning package (if you didn’t get a seasoning package, you can use pickling spice) in a big, heavy pot. They always say a Dutch oven, but I don’t have a Dutch over, so I use a heavy 6-quart pot. It comes with a lid, but I usually use an anti-spatter cover rather than a lid. The hardest part is getting my stove to simmer the meat without going into a hard boil — or not boiling at all. Electric ranges are like that. Cover the corned beef with water. Bring to a boil. Reduce heat and simmer for 2-1/2 hours.

NOTE: Two hours was more than enough for our brisket. Check at least every half hour to make sure there’s enough water, that the meat is really simmering, and while you are at it, poke a fork in the roast until it feels tender. Do NOT go entirely by recipe directions. Everyone’s stove is different.

When the roast is tender, discard the water and vegetables. Place beef on a greased rack in a roasting pan. Set aside.

NOTE: The recipe called for cooking the glaze. I didn’t cook it. It was fine mixed by hand.

Brush the glaze over the beef. There’s a lot of glaze. Use all of it. After a while, I gave up brushing and just poured.

Bake, uncovered, at 350 degrees for 25 minutes. Know your oven. Ours runs about ten degrees cool so we baked it at 360 for 25 (more or less) minutes. Let it stand for 10 minutes. I don’t think we made it to 10 full minutes. More like five minutes.

Use a sharp knife and slice it as thinly as you can. It’s incredibly good. This is a drool-worthy recipe! The recipe also urges you to share it using #justapinchrecipes. I agree. This is as good as corned beef ever gets.