Can you set a price on love? Can you set a number to it? Can you calculate it by the cost of health care, toys, dog food? Grooming?

Tinker Belle was a Petit Basset Griffon Vendeen, also called PBGVs or Petites. They are medium-sized, shaggy rabbit hounds from the Vendée region of France. During the past 25 years, they’ve also gotten very popular as pets, though they are definitely not a dog for just anyone. They are much smarter than they have any right to be, hilariously funny (and the more you laugh, the funnier they become), noisy, and extremely busy or as we used to put it, always looking for trouble.

Even in such rarafied company, Tinker Belle was special. From the day we brought her home, she wasn’t like any other puppy I’d ever met. She was incredibly smart. As a rule, hounds are smart, but she was special.

Housebreaking? We showed her the doggy door. She was housebroken. She could open any door, undo any latch that didn’t need a key, unhook any gate and close the gate after her. She could (did) open jars of peanut butter without leaving a fang mark to note her passing. All you’d find was a perfectly clean empty jar that had previously been unopened. It looked new. New and empty.

She was sensitive and easily hurt. Probably born to be a therapy dog, she knew who was in pain, knew who was sick. She knew where you hurt. She was the only dog who would never step on a healing incision but would cuddle close to you, look at you with her dark, soft eyes and tell you everything would be fine.

She never hurt a living thing, not human or anything else … except for small varmints she hunted in the yard. She was, after all, a hound and a hunter at that, born to track, point and if necessary, kill prey.

She was the smartest of our five dogs, the smartest dog of any dog I’ve known. Not just a little bit smarter than normal. A huge amount smarter. When you looked into Tinker’s eyes, it wasn’t like looking into the eyes of a dog. She was a human in a dog suit.

She knew. We called her Tinker the Thinker because she planned and remembered. She held grudges. More about that. Yet she was Omega (the bottom) in the pack. We thought it was her choice. She wasn’t up to leadership responsibilities.

The other dogs knew her worth, so despite her low status in the tribe, when they needed a solution to a problem, they all came to her. When needed, other dogs would tap into her expertise in gate opening, package disassembly, cabinet burglary, trash can raiding and other canine criminal activities. Throughout her life, she housebroke each new puppy. A couple of hours with Tinker and the job was done. It was remarkable. Almost spooky. She then mothered them until they betrayed her by growing up and playing with other dogs. 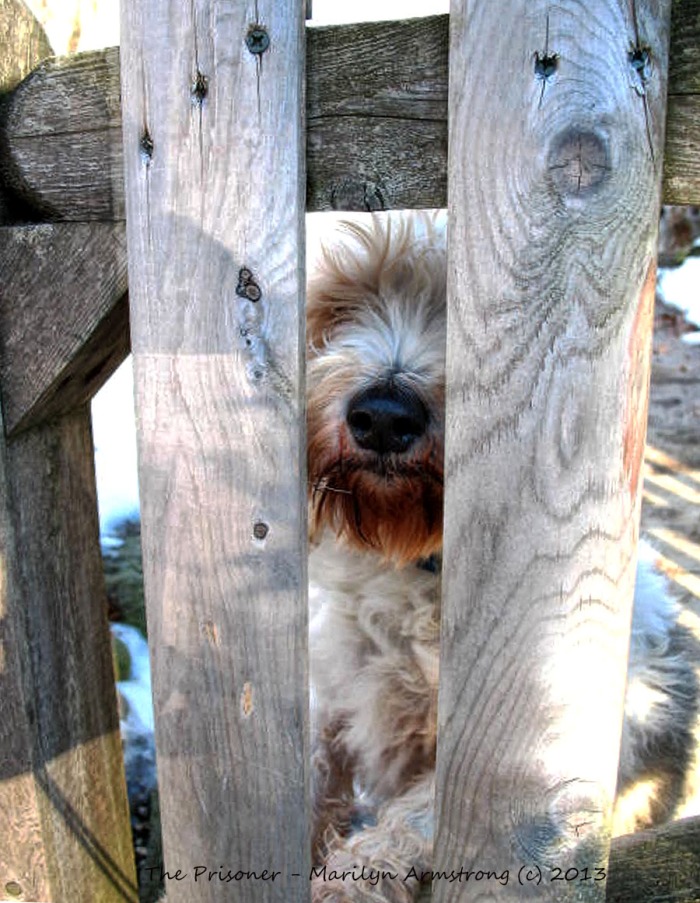 When Griffin, our big male Petit Basset Griffon Vendeen came to live with us a few months after Tinker’s arrival, they became The Couple. Inseparable. In love. They ate together, played together, slept together, sang together. About a year later, we briefly had a little Norwich Terrier pup and Griffin (what a dog!) abandoned Tinker to go slobbering after Sally.

Tinker’s heart was broken. She became depressed, would not play anymore with humans or other dogs. For the next 10 years, Tinker refused to so much as look at Griffin. Worse, she apparently blamed us, her humans, for having brought another girl into the house. In retribution for our crimes, Tinker began a Reign of Terror.

Tinker took to destroying everything she could get her fangs on when she was three. She’d done a modest amount of puppy chewing, but nothing extraordinary. She was more thief than a chewer. She would steal your stuff and hide it. Shoes, toys, towels, stuffed animals. After Griffin betrayed her with that stupid little bitch — Sally was indeed the polar opposite of Tinker being the dumbest dog I’ve ever known and ill-tempered to boot — Tinker was no longer a playful thief.

She was out to get us.

Nothing was safe. She had a particular passion for destroying expensive electronic devices. Cell phones, remote controls, portable DVD players, computers. If she could get a fang to them, she killed them. She would do more damage in under a minute than I thought possible. For Garry and I, it meant we couldn’t leave the room together unless we put everything away where Tinker couldn’t get it. Tinker would strike quickly and was deadly.

Kaitlin’s toys were safe if Kaity was currently paying a lot of attention to Tinker. If not, she was punished with the beheading of any doll Tinker could find. She didn’t bother with limbs but always went straight for the head. She gutted stuffed things with grim efficiency. 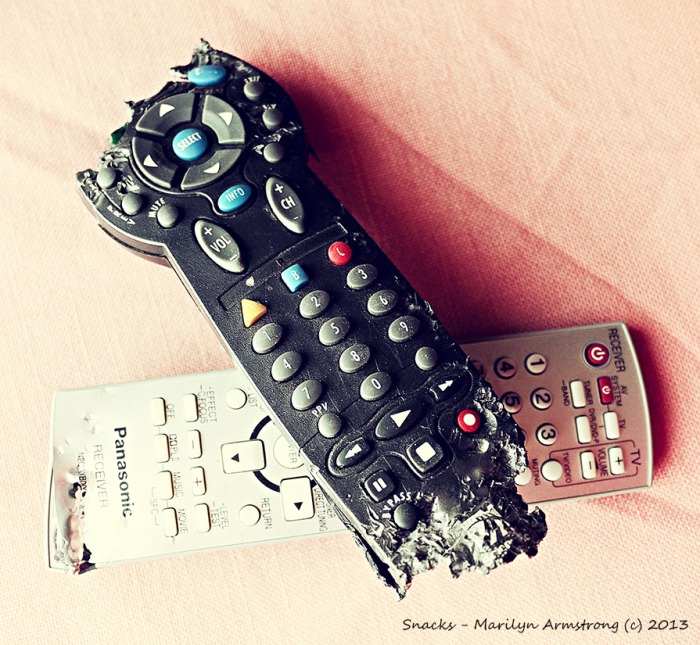 During one memorable intermission, Garry and I went to the kitchen to grab something to drink and she dismembered our remote controls. We were gone, by the clock, about two minutes. The kitchen is adjacent to the living room, so she managed to do this with us not 10 feet away. It cost me a couple of hundred dollars to replace them.

She pulled off the backs, tore out the batteries (but never ate them), then ripped out the wiring and boards. She didn’t waste any time, either. If she had the leisure, she’d also tear out the keys and generally mangle the cases, but if time was limited, she went straight to the guts of the thing. She was good.

For 10 years, we lived under siege. If you didn’t want your device Tinkerized, you couldn’t leave it exposed, not for a minute.

Yet we loved Tinker and for the last year of her life, after Divot passed and we brought Bonnie home, Tinker became a real dog again. Under the influence of Bonnie, the friendliest, happiest, most charming Scottie on earth, Tinker came out of her sullens and played with Bonnie. She ran around the yard and played tag, joined the chorus when the other dogs pointed their muzzles at the sky and sang.

Hounds have such beautiful voices and Tinker’s was the most beautiful of all. When she sang, nature sang with her. I suppose this is a matter of taste, but for those of us who love hounds, you know what I mean. Singing is a social function for canines. When a pack sings, it isn’t an alert. It’s a chorus. They are really truly singing together. Each dog has a part, joining in, then pausing and rejoining at the right moment. Tinker was a baritone, the deepest and loudest of the canine voices and Bonnie is a coloratura soprano, very musical, but light.

Tinker died of cancer at age 12. She had shown no symptoms except a slight slowing down and a very minimally reduced appetite. One day, she collapsed. She was riddled with cancer. How in the world she had so effectively hidden her illness is mind-boggling, but she did. A couple of weeks later, Griffin had a massive stroke and died. They were almost exactly the same age and I don’t believe for a minute that the timing of their passing was mere coincidence.

The house was so quiet with the two hounds gone. We didn’t have to hide everything anymore, though it took us months to realize it was safe, that I could leave my laptop out at night and no dog would bother it. After the two hounds passed, the pack did not sing for half a year. One day, mourning ended and they started to sing again, with our little dachshund leading the chorus.

They sing twice a day, early in the morning (get up Mom) and in the evening (pause that show, time for the chorus).

What was Tinker’s true cost?

We paid $700 for her when she was a puppy. Who knows how much her medical care cost over the years? That’s such a basic part of the contract between dogs and their keepers. They love us, we care for them. Other damages? Thousands of dollars in electronic gear, furniture, shoes, books, DVDs, videotapes, dolls, stuffies and who knows what else.

But she paid us back\. When I was terribly ill, Tinker never left my side. When I was back from surgery, missing another piece of me, Tinker was there, never placing a paw where it would hurt me. How does it add up?

How much was the love worth?