Home › Friendship › AN ADVENTURE TO THE NORTH

AN ADVENTURE TO THE NORTH

When I mentioned to some friends that I would be going to Toronto, they asked me if I was going to drive. It is a reasonable question. You can reach there in a little over 8 hours from Chicago. That is assuming you are not trying to drive through the city during rush hour and you are not trying to cross the border when Candian truckers are blocking the road due to protests. It seems they don’t like vaccine requirements and mask mandates. We flew. It is about an hour and a half flight time. We left on a Tuesday and came back on a Friday and thus avoided peak times. Walking time from Chicago to Toronto is said to be 165 hours, but I digress.

Upon arrival in Canada, you may have to undergo a random Covid test. My travel companion and I were not asked for tests and we received green stickers with “PHAC,” which means fully vaccinated. They did call me for a survey, but I had no phone service in Toronto and did not get their Covid-19 survey until I returned home. 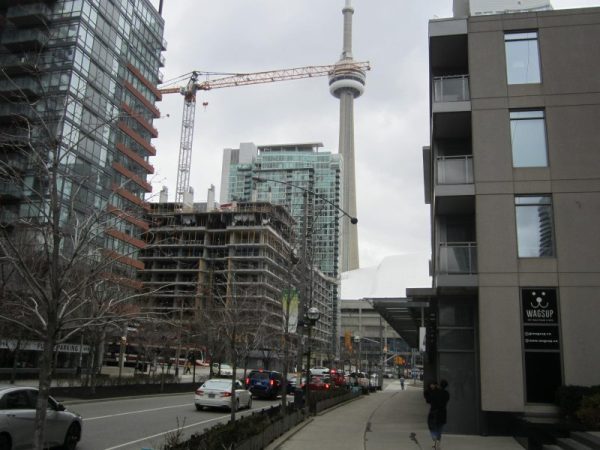 From the airport, we took the Union Pearson Express to downtown Toronto. The trip takes about 25 minutes. The cost is much lower than a taxi or rideshare service which could take about the same amount of time during off-peak hours. We decided on a Uber for the short distance from the train station to the downtown Airbnb condo we booked. The mid-afternoon traffic made the trip of about a mile quite a time-consuming journey. I realize now we could have walked faster, but we did not want to do it with our luggage.

The downtown neighborhood is filled with attractions and a tourist should not get bored. It will seem quite expensive at first, but you must keep in mind that the Canadian dollar is about 80 cents in USD. Try to use a credit card that does not whack you to death with foreign transaction fees, however. I had a long list of those on my Chase Visa. A bad bank exchange rate plus fees can run up your costs. It is best to check those out before setting off on any international travel. Since some venues will no longer accept cash, a good credit card is a must. Your debit card is also likely to carry a poor exchange rate and foreign transaction fees at many banks. Research is important.

One of our first stops was the Ripley’s Aquarium of Canada. The impressive facility is said to have over 20,000 specimens. Their many exhibits hold 5.7 million liters of water or just over 1.5 million gallons if you are not on the metric system. It is located next to the CN Tower so it is easy to find. It is a short walk from Union Station and located between the Toronto Convention Centre and the Rogers Centre, home of the Toronto Blue Jays. 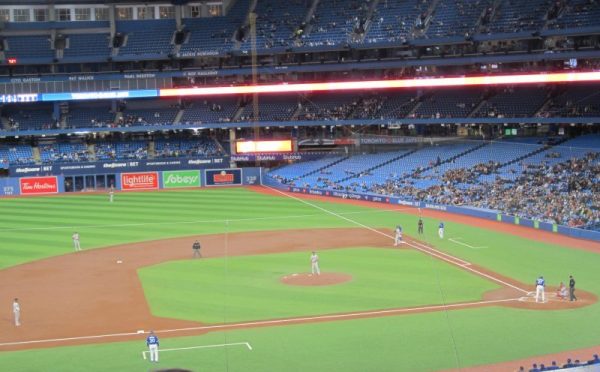 We acquired Toronto versus Boston Red Sox tickets prior to our journey. The weather was rather cool outside, but the stadium has a retractable roof so we were able to watch the game in comfort. Garry Armstrong will be pleased to know that the Red Sox won 7 to 1. My travel buddy saw his favorite player on Boston score a run so I guess our first fisit to the ballpark was a success.

On the next day, we decided to explore the neighborhood across the tracks from our downtown location. A short walk took us to a pedestrian bridge that saved us a lot of time getting to the other side.  From there we wandered down to  Queen Street and then over to the large Trinty Bellwoods Park. The variety of cafes, boutiques, and art galleries along Queen Street offers the shopper many places to browse along the way. I paid attention to the coffee shops on our way to the park so we could stop and rest at one on the way back. Good travel buddy picked out a coffee shop that is also a French bakery. Who knew you could eat so many macrons at one time? 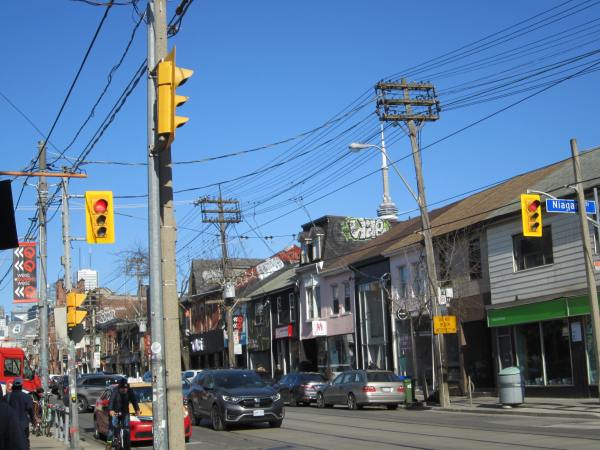 Queen Street and the surrounding area are known as the Art and Design District. Much of what we saw was heavily “tagged” and there is even a place known as Graffiti Alley, which is as its name suggests. Much of what you see might be considered “street art” but some of the graffiti is…well, just graffiti.

On our return, we were able to clear US Customs at Toronto airport. We found the YYZ layout to be somewhat odd and it has all the earmarks of an airport that was put together piecemeal over the years. I found the walk to our gate (F99) down long narrow hallways to be unlike passageways in other airports. By the way, it seems they need to add to the Pearson Airport cleaning crew, but I digress…again. 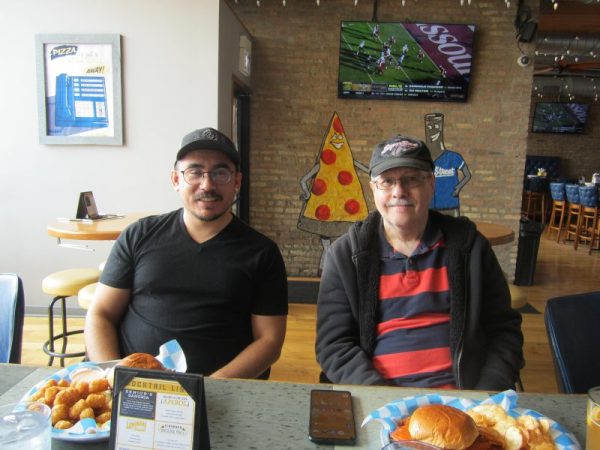 Lewis and I in “Easy Street”

On our return to Chicago, we stopped at one of our favorite local establishments, Easy Street restaurant. I failed to get any pictures of us in Toronto so I got one at home. OK, I did take a selfie of us at the ballpark, but there is little chance I will be posting that. I should have asked my travel buddy to take the picture. I have not mastered the art of selfie picture taking. I will work on it for our next adventure.