Home › Entertainment › IF THIS IS GOODBYE – RICH PASCHALL

IF THIS IS GOODBYE – RICH PASCHALL

Brian Wilson and Chicago in concert, by Rich Paschall

Two headlining groups hit the road for a 25-city tour this summer. Since one of the headliners was Chicago, they of course came to Chicago. The other was Beach Boys’ founder Brian Wilson’s band featuring Al Jardine, another founding member, and Blondie Chaplin, a touring member of the Beach Boys in the 1970s. Matt Jardine, Al’s son, is also in the group and sang some of the songs the old timers would be hard pressed to sing. Someone has to do the high parts.

The 12-piece group included some musicians that have been touring with Wilson for quite some time. Musically they are quite tight. They provide the studio-quality sound Wilson prefers. Their set list is mostly a collection of Beach Boys hits, many written by Wilson himself.

While they have played together many times in recent years, this group did not exhibit the polish they have shown in the past. This could be due to Brian’s lack of involvement and the need to redistribute some of the singing assignments. The musicians are great, but there was certainly an inconsistency in the vocal quality of a few songs.

Brian Wilson has been to Chicago before. I saw him on the Beach Boys’ 50th Anniversary tour and a few times after that with his own band. Mike Love owns the name the Beach Boys and thus Brian and the other surviving Beach Boys can not use it. 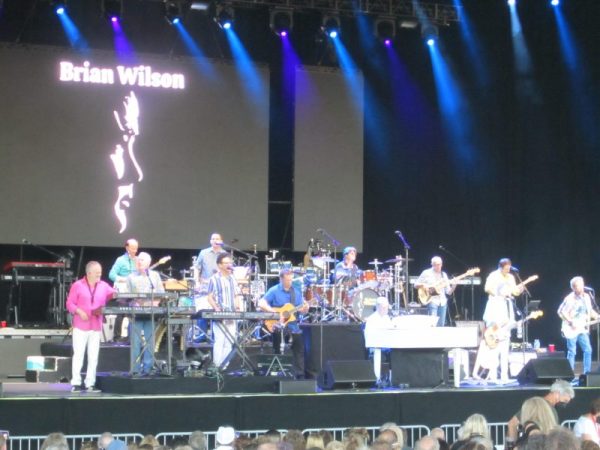 In the past, Brian seemed quite engaged in the performances. At 80, Brian is clearly struggling. Reviewers along the tour seem to agree that you do not know from night to night how engaged Wilson will be. Wilson comes out on stage with the help of a walker and is assisted by two crew members. We could not see from our location if Brian was actually playing the white baby grand piano you see at his shows. Long-time Wilson assistant, singer, and keyboard player Darian Sahanaja had a clear view from Wilson’s right and could jump in as needed, as could Matt Jardine on vocals. Wilson only sang on a few songs. Despite the weak sound of his voice on his most praised song, God Only Knows, the audience rose to its feet following the tune. The quality was not important to the adoring fans. The fact that Wilson was there and performed his most revered hit was enough.

If Wilson is to continue after this summer’s tour, it is clear his health and focus will need to improve. If he has to say goodbye to Live concert performances, we can be grateful that he has given us so many hits to enjoy. Rather than anything from the current tour, I have chosen the nostalgic piece written by Wilson, Joe Thomas, and Jon Bon Jovi from 10 years ago:

The forever touring Chicago came through town again. I really can not say how many times I have seen them over the decades, but I can say they never disappoint. After Brian Wilson’s group played for an hour and a half and there was a half-hour intermission, Chicago went on to play a set that lasted almost two hours. We had no idea we were in for a four-hour concert experience. Both groups are headliners and gave us lengthy set lists. Wilson was to play 18 songs, while Chicago had 25 on their list with a couple of encore songs.

In recent years Chicago has undergone a number of lineup changes. Keith Howland broke his arm prior to the tour and decide to call it a day. Lou Pardini bowed out and thanked the group for “a great and wild ride.” Pardini is 70. As long as they can surround those great horn players with excellent musicians and singers, the group is likely to go on for a while.

Founding members James Pankow and Lee Loughnane on trombone and trumpet do not seem to have lost any of their energy as they played through a warm summer night. I did notice Pankow made a shirt change at one point in the evening. It had to be warm on stage. Sax and flute player Ray Herrmann rounds out that horn trio and the sound we have loved for decades.


The above was from my vantage point. It does not seem as easy to hold the camera steady as it used to.

Chicago played all the songs we would expect from the group. They also gave us one that appears on their new album. Yes, Chicago, Born For This Moment, aka Chicago 38, is their first studio album of all new material in 8 years. Why stop now? The 14-track, double LP will be out in October, but most of the songs are already posted by the band. You don’t have a turntable anymore? That’s OK, there is a CD, or you can stream it or just listen on YouTube. They are currently promoting the single, “If This Is Goodbye.”

James Pankow told us this was NOT goodbye and they would be through again next year. If you can keep writing great songs and delivering quality on stage, why say goodbye just yet?