Home › Entertainment › GIVING IT YOUR ALL

GIVING IT YOUR ALL

When you are working on a project that has a very personal meaning, you will want to give it all your energy and devotion. You would hope that everyone else involved in the project would do the same. What would be the point of months of hard work if the finished product did not exceed everyone’s expectations? 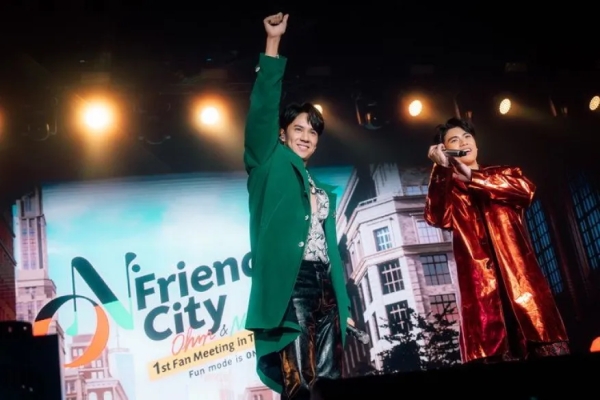 That was the case for Ohm Pawat, Nanon Korapat, and the creators of the multi-media spectacular dubbed O-N Friend City, aka Ohm Nanon 1st First Fan Meeting in Thailand. Their “Friend City” was actually the Union Hall in Bangkok. The massive convention space can be configured into any type of concert space you want. GMM TV spared no expense in building the out-of-this-world stage and video boards.  Halfway down the hall were large video boards on either side for those sitting back there. That would have been a long way away, but the massive OhmNanon fandom was likely just happy to get a ticket. For those live streaming, there were English translations of the songs. The translator did not keep up with all the chat and interviews.

The show opened with a video of Ohm and Nanon. The stage itself was filled with backup dancers and exhibited no shortage of fog, lights, and pyrotechnics as the two stars appeared to the screams of their fans. They opened with several high-energy numbers that would have tired out the most seasoned Broadway performers. “Red and Green” was the theme of the opening song and played off the Green and Red hearts that are often appearing on their Twitter pages, as well as that of their fans. Nanon wore green and Ohm’s outfit was red.

After the first three numbers, the pair chatted for a while, mostly to catch their breath, I think. They held nothing back in the song and dance numbers. With their long coats, they seemed ready for winter in Chicago rather than dance numbers on a hot stage. In that short interlude, Nanon brought out something to wipe the sweat off Ohm’s face, much to the delight of the crowd.

A solo segment featured Nanon doing a ballad that exhibited his range as a singer. Then he pleased the 5000+ on hand with “Just Friend?” from the Bad Buddy series. Nanon showed off his guitar playing with a solo and invited the crowd to sing along at the end, which they happily did. In a segment featuring just Ohm, he managed to do as previously mentioned to Nanon, and play as many instruments as possible. Modern technology allowed him to play four instruments at once. He started out by laying down a loop of his drum set. Then he got up and added a bass loop. That was followed by keyboards. With everything running, Ohm moved to electric guitar and gave us a guitar solo. He followed with a song and a shirtless dance number meant to break the internet.

A series of numbers followed that reimagined scenes from the hit series, Bad Buddy. Many of the cast members from the original series joined in some of the numbers. The rival gangs opened with a rap number to reset the opening of the series. In Are You Sure, Pran (Nanon) goes to his best friend Wei (Jimmy Jitrapon) rather than choosing Pat (Ohm) just as he did early in the series.

If you saw the series and remembered the most iconic moments, they were all played out there for the audience on hand and around the world. The rooftop moment from episode 5 was there too. That was likely the time social media really exploded with chatter about Bad Buddy Series.

Nanon (L) and Ohm recreate a moment from Bad Buddy.

Both Ohm and Nanon got to pick their own guests to perform with after the Bad Buddy numbers. Ohm chose his friend and fellow GMM actor Perth Thanapon and his “Little brother” Thai Thanat. The younger brother actually towers over the 6 foot 1 inch tall Ohm.

Nanon picked his boyhood idol, Wan Thanakit. It was an emotional moment for Nanon as he explained how they met and then they performed a number together.

As if the show wasn’t long enough at this point, the boys continued on with additional numbers before coming out in matching white and silver suits to see a fan video showing highlights from interviews and other clips. It was an emotional moment for the pair. We previously discussed that in “Who We Are Now.”

The rerun of the event on Thai Ticket Major for a hefty 1220 Thai Baht (about 35 USD) runs 3 hours and twenty minutes. You get 4 hours of viewing and you don’t have to use it all at once. They ended it with an emotional discussion between the stars and skipped the closing number. Not to worry, you can find clips all over the internet.

GMM TV is offering a presale of a two-disc box set of the show. Hopefully, they will give the entire show along with the English translations that were missing during some of the chatter. Since it will not ship until mid-November, you can plan it as a Christmas gift if your address is outside of Thailand.

There is no denying the boys gave everything to their energetic performances. Ohm offered it as his gift to Nanon. Ohm was not used to singing or dancing before Nanon worked with him to do it in their many appearances together. He held up well throughout the long concert but had completely exhausted himself. In the week that followed, Ohm was hospitalized with a fever. He was exhausted and could not eat due to his sore throat after the show. He left the hospital to make an appearance at a show along with Nanon the following Sunday. He made it through OK but had to go back to the hospital afterward. He left again on Wednesday for a previously planned promotional appearance with Nanon for My Beloved Tomato (seriously). He could not sample the product due to his sore throat and Nanon did most of the talking for the pair.

Ohm said it was all worthwhile. When asked about the emotional ending, he said at that moment it was just Nanon and him in the hall. If you are going to watch the ending, which is all over YouTube, bring Kleenex.