We got to Busch Gardens on August 10, 2012. It was pretty early in the morning, especially since we are long past being morning people. I’m sometimes still an early riser, but Garry is a late sleeper. It’s his reward for a lot of years of never getting enough sleep.

We indulged on renting a couple of electric scooters for Garry and I. Pricey at $90 each. I spend less on motel rooms, but I am so glad we did. They were worth every penny and were fun, too.

It was hot, well over 90 degrees. Busch Gardens is spacious … which translates to a lot of walking. The scooters took the pain out of it. Other than feeling a like Road Runner yelling “beep beep” as we navigated the park, dodging kids and their grownups, we came out of the day feeling pretty good.

What did we do?

Not as much as I wanted, but for two senior citizens, probably more than enough. Even though we weren’t hoofing it, it’s still a big park. There’s considerable distances from one ride to another, from one exhibit to the next. Getting from place to place eats a lot of time, so if you intend to do it all (unlikely, but you can try), plan on being there a very long day. Or two. Or more.

We arrived around 11 and left around 5:30. We only managed 5 rides, grabbed some lunch, and spent a little time looking at eagles and wolves. The eagles and wolves looked about as hot and sweaty as we felt. I felt sorry for them. That’s no kind of life for wild creatures. We wasted no time. Except for a 45 minute lunch break, we were on the move the entire time.

We rode two roller coasters: Apollo’s Chariot and Loch Ness. We never made it to the “baddest” of the coasters, the Verbolten and Griffon. But I think we did enough. 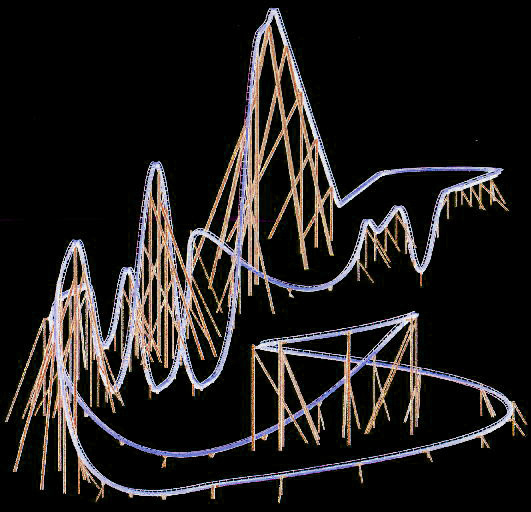 The layout of Apollo’s Chariot.

Apollo’s Chariot has a first drop that’s pretty heart stopping, some twists, turns, and barrel rolls that do a pretty good job tossing you around. It is also a very short ride … maybe 3 or 4 minutes. Which is enough, thank you.

“After latching in, riders hear a typical dispatch message, “Thank you, and enjoy your voyage to the sun on the wings of Apollo’s Chariot!” The train climbs a 170 foot lift hill. When the train finally reaches the peak, it drops down a few feet in a pre-drop. The pre-drop serves to reduce the stress and pull of the chain. After the pre-drop, riders drop 210 feet toward a water-filled ravine at a 65 degree angle and reaching speeds of 73 mph. At the end of the ravine, the train enters a second airtime hill with a 131 foot drop. A short narrow above ground tunnel is at the bottom of the second drop. Then after the third hill, the train descends a 144 foot drop, which banks to the left as it descends. Then there is a large, upward helix which pulls 4.1 Gs. Coming out of the helix, there is a small drop, then a climbing right turn into the block brake. A sudden dive off the block leads into a bunny hop parallel to the ride’s initial plunge. Then, the ride features an overbanked turn under the lift hill, just dodging one of the support columns. After this, the train makes a left hand turn, and at the end the is a camel hump hill and drop into a ditch where the on-ride photo is located. Then the train enters the final brakes. After a left turn, the riders return to the station.” From Wikipedia.

Loch Ness is a different story. It is a long coaster, the longest I’ve ever ridden. Lots of upside down barrel rolling loop-the-loops and nobody warned me about the tunnel. As we went around, tightly locked in, I somehow was able to emerge with what I think is a separated shoulder, a bruised patella, and possibly a permanently damaged left hip. Garry probably should be in a neck brace.

The ride, located in the Scottish themed area of the park, also features a helix tunnel, two lift hills and a 114-foot (35 m) drop, is classified as an American Coaster Enthusiasts Coaster Landmark.”

As the train starts to move, a voice recording says, “Thank you, and enjoy your ride on the legendary Loch Ness Monster!” After departing from the station, the train reaches the 130-foot (40 m) lift hill with a small and tight turn (with views of Apollo’s Chariot’s lift hill and first drop) bringing it to a 114-foot (35 m) drop towards the park’s Rhine River below. A large upward hill crosses over the park’s ‘Land of the Dragons’ and trim brakes bring riders to the first of the two interlocking loops. After the loop, the train makes a turn and to a block brake, which then leads into a covered tunnel/helix.

Inside the tunnel, the train makes 2.75 circular turns before coming to the end of the tunnel. The tunnel has had various lights and special effects over the years, including a light up picture of the cartoon Loch Ness Monster, and now has one strobe that goes off at about the beginning of the second revolution. The on-ride photo was once taken inside the tunnel, but has since been changed to a position after the second loop. As the train exits the tunnel at the end of the helix a small brake run slows the train to ascend a smaller second lift hill.

The train makes a wide turn after the lift and drops downward into the second loop. It then goes uphill again before being brought to a stop by the final brake.”  From Wikipedia.

I want to mention that the video on the Loch Ness coaster does not do it justice. It’s a lot more intense than the video would indicate. And longer.

We passed on the other four big bad roller coasters and though I feel I have failed to meet my obligation to ride all the most evil roller coasters in this lifetime, the time may finally have come for me to accept I am not a kid anymore. These coasters make the Cyclone seem tame. Except for the actual danger factor. That’s where the Cyclone takes the prize because it’s old. There is always a real possibility it’s going to kill you dead for real and all.

When you ride the Cyclone, it’s hard to not notice how old it IS. It shakes. It’s rickety. In addition to whatever fear is generated by speed and dips and getting flung around, there’s the actual possibility that it’s going to collapse with you on it. I’ve thought that since I was 8. It hasn’t done it yet, but it could.

Busch Gardens inspects each ride, each coaster, every 4 hours. If there is anything that doesn’t seem perfect, they walk the track, foot by foot, checking to make sure that everything is as it should be. This means that there are a lot of time outs for maintenance and you just wait while they double and triple check everything.

That’s fine with me. It makes the rides less scary in a real life way, but not less fun … or less painful. I’m pretty sure the Cyclone wouldn’t make the cut. I think they inspect it at the beginning of the season and if a piece falls off (it happens, really, I’ve seen it) they check to see if it’s a critical piece. No? Roll on, roll on.

So here’s how it goes. Having survived the “easiest” coaster, Apollo’s Chariot with a nearly vertical drop, we proceeded to the Loch Ness Monster. Second coaster. Up, up, up, up. Boy, we sure are going up a long way. Golly. Then, pause. Look down.

Holy……AHHHHHHHHHH…..oooh …. ouch, there goes my right knee. Ow, ooh, damn, I think I just dislocated my left shoulder. Upside dooooown … holy sh*t … yikes. Hey, why is it so dark … what’s this tunnel? Nobody told me about a tunnel. Where the hell are we? Yeow, oh my GOD … upside down and twist and ahhhhhhhh…. ouch, ooh, other knee … did I just break that patella?

Let’s get some lunch, okay? Let’s visit some animals. Buy a tee-shirt.

After that, we went on a nice virtual airplane trip through Europe, and spooky Dark Kastle in Germany, something that spun around and was, for us, a kiddy ride, but people were actually screaming (wimps). And then, on our little electric scooters, we headed for the gate and back to the hotel. The old people have their feet up, reruns of NCIS on television.

Alive to tell our tale.

So if you are over 65, but nonetheless will be damned rather than not do that cool stuff, just be aware that there’ll be a few bruised parts and maybe a few missing pieces at the end of your day. Glad I did it. Not sure I’ll do it again.

Like Loading...
‹ Weekly Photo Challenge: Up – Through Glass To Sky
Weekly Writing Challenge: A Fine Recipe for Baked Me ›