It’s 76 miles as the road goes, but it took three hours. Which wasn’t bad considering it was a snail trail all the way. Friday night traffic is bad and the roads to the Cape are the most crowded. No matter. We were in a good mood. Patient. No screaming and cursing as we were cut off and tail-gated crawling to Cape Cod. 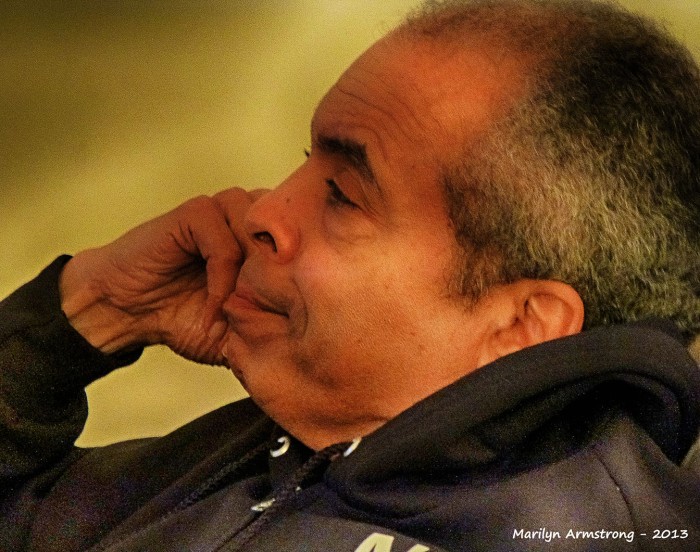 Finally we got here. I got a bad feeling. You probably know what I mean. The asphalt in the parking lot is all broken. It feels dilapidated. You try to find the office and you can’t because there’s a backhoe parked in front of it. And in your heart, you know your room is directly behind the backhoe. Yup, I knew it. I asked for a different room. I just couldn’t do a week staring at the ass end of a backhoe.

“The last lady loved it. She had three little kids and said it would keep them interested.”

“We don’t have little kids. I prefer not to spend my week on the Cape up close and personal with a back hoe.” Humor? My head hurts.

The only other available unit is on the second floor. No elevator. No help with our stuff, of which there was, as usual, way too much. I had asked for a room with handicapped access. “Well,” she said, “You’d have to talk to your exchange group about that.” Right.

We needed a place to sleep. It was getting late. We were tired.

Garry had A Look. I know that look. He’s pissed, figures it’s not worth fighting over because it’s futile. He spent years on the road and he knows a dump when he sees one. And, as he points out later as he is hauling several tons of stuff up a steep flight of stairs … “We’ve stayed in worse.’

The old futon in the “living room.” What a beauty!

Indeed we have. The place in Montreal with the hot and cold running cockroaches. That was very bad. This place IS a dump, but there are worse dumps. At least the WiFi works.

The mattress on the bed may have had some spring, a hint of softness … a long time ago. Long, long time ago. Now, it’s weary. Made bitter by hard use, it is lumpy and unforgiving. I sense 8 nights of torture awaiting us. Don’t stay at the Cape Wind in Hyannis. You’ll be sorry.

The bed is hard as a rock. The ancient futon in the living room is ugly and stained, but oddly comfortable. The TV works and the National League playoff series starts tonight. If there’s baseball, Garry is good to go. Until we hit that bed. That’s going to hurt. A lot. We brought our own pillows. Maybe I’ll sleep out here in the living room on the futon.

The bathroom. Garry looked. “It has,” he said, “A certain ‘je ne sais quoi.’ ” Yes, that certainly is true. I was laughing hysterically when I pulled out a camera and took a few shots of it. “Je ne sais quoi” like this is too good to not share. 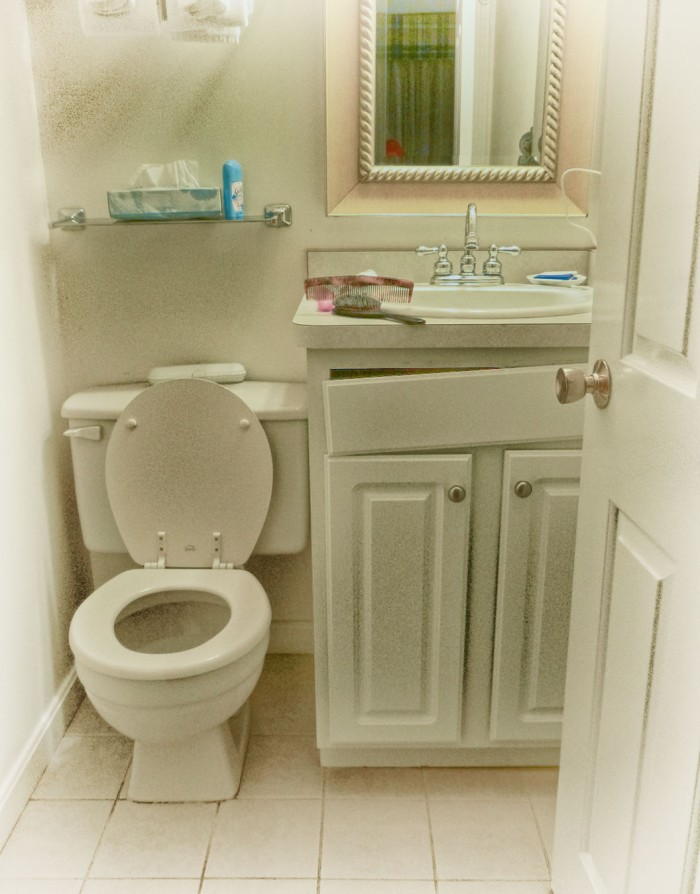 No baking dish. I use the broiler drip pan. I ask about getting one. Tomorrow. Hopefully. How about a bulb for the lamp in the living room? Tomorrow. Hangers for the closet? It’s a big closet, but not useful with no hangers. Tomorrow — if they have any (good luck). The dresser is tiny, just three small drawers — more like an oversized night table. I give two to Garry and decide to keep everything except my underwear in the duffel.