THE FAR ARENA ON AUDIBLE.COM

This great book is finally available again in print as well as on Kindle and as an Audiobook from Audible.com. Thirty-six years after I first read it, you can buy it again. Now that I’ve listened to it for the first time (as opposed to reading it), it is not only as good as I remember. It is better.

The Far Arena is classified as science fiction, but not in the traditional sense. It doesn’t fall into any genre except perhaps speculative fiction, which is a catch-all term for all the books that can’t be otherwise categorized. Time travel? Sort of, although the only “mechanism” is time itself.

The Coliseum at Pompeii 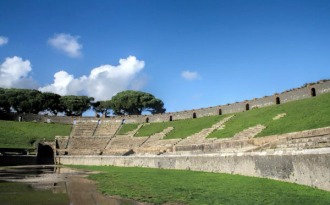 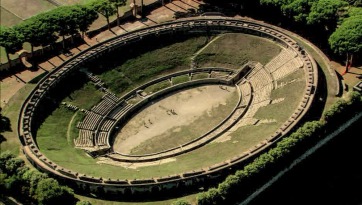 The story in brief: A Roman gladiator is flash frozen in the arctic ice. He is accidentally discovered by a team drilling for oil not far from the arctic. He is subsequently defrosted and brought back to life. What follows is his story as a Roman married to a Hebrew slave, and his perceptions of our modern world from the point of view of a man whose world disappeared 2000 years earlier.

For example, while in the hospital, he asks about the slaves who serve him. He is referring to the to nurses and other workers who attend to his needs. His new friends explain that they aren’t slaves, that they work for wages and are free to leave, or be dismissed by their employers. He thinks this is a fantastic idea.

“You mean they do everything you tell them to do, but when they get old and can no longer work, you don’t have to take care of them? What a great idea! Slaves without responsibility.” 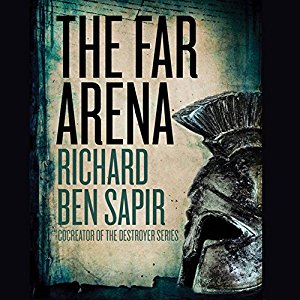 That is paraphrasing, of course, but it’s the spirit of the dialogue. This isn’t a quick piece of dialogue in a long book about “other things.” The discussion of “what is slavery” is an underlying theme throughout the book along with “the corruption of giant corporations” which apparently has not noticeably changed between the days of the Roman Empire and today.

Although I had read the book several times, I had never listened to it. I wasn’t intending to listen to the whole thing. I just wanted a little taste. I have a giant heap of books I have promised to read and I thought “I’ll give a little listen” and come back to finish it when I have more time.

I had forgotten how good the book really is. It has been a long time since I picked up a book and was sucked in from the first paragraph until the very end … and was still wishing there would be more. It gave me a sharp pang, realizing how few really great books I read these days. How many are touted as great, but reading them, they are no better than ordinary and often far less.

Not only was Richard Ben Sapir a brilliant writer, but Peter Noble is a terrific narrator. He handles dialects with ease and give the book the intensity it deserves. Never over the top, never too dramatic, he is as perfect as a narrator could be. And considering how much I love the book, I’m surprised to find myself saying it.

I had a lot of trouble not restarting the book from the beginning and giving it a round 2, just in case I missed a paragraph somewhere. What is really eerie is how the main character, drawn into modern times following 2000 years of cryogenic sleep, understand this world better than the people he meets in 20th century Europe.

The man from Rome understands corruption. He understands slavery, whatever we choose to call it. He knows that the rich and powerful will never support the poor and will always do what is to their benefit.

It is a level of cynicism which sharply focuses the lens of 2017.

“I am old. I should have left before. Any fool can ride the chariots of victory. It takes judgement to get off at the right time.”

“We are all the children of Rome, without knowing it. Our months are called after Roman emperors or gods, our summer is July and August, named after Julius Caesar and Augustus Caesar. When you people scream fascist at us, you are referring to the rods of authority called fasces by the Romans. The idea of law written down and to be observed equally comes to us from the Romans, and our alphabet comes to us exactly from the Roman. From plumbing to the idea that surrounding someone in battle gives victory, Rome gave them to us. Rome is our common, civilized roots, so deep that many of us in the West do not even realize it unless we are educated to it. Rome is our intellectual father, and we have been living off its remnants for two thousand years.”

“Honesty is too strong a drink to be unwatered all the time; rather it should be given in doses.”

“The authorities? The authorities?” I laughed. “Why is it people think the authorities are some form of gods with either great justice or great, cunning evil, rather than the same plodding fools they see in their daily lives, and most of all in their mirrors?”

“Woman, so often you have said that even in the darkest night there still exists a sunlight so bright we cannot look at it. Now if this is so, somewhere in this bright day is a night so dark the terrors know no bounds. So let us not be so happy.”