MY EARLY EXPOSURE TO CANCER PATIENTS – BY ELLIN CURLEY

During my pre-teen and teen years, it seems like a lot of people around me got cancer. Between the ages of eleven and eighteen, I was closely involved with five different people who had cancer and only one survived – my father. 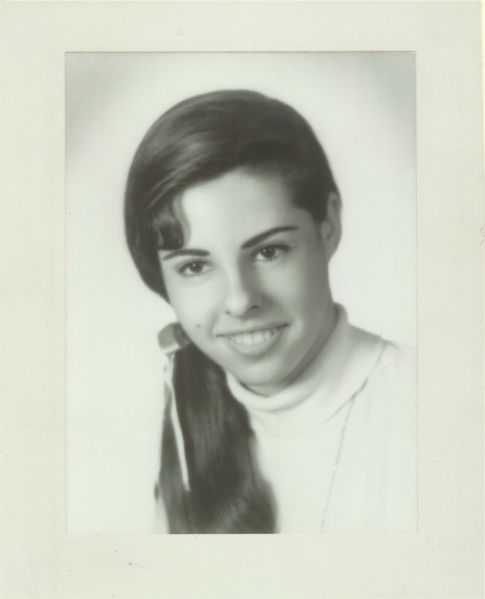 Me at eighteen. My high school senior yearbook photo.

My first exposure to cancer was through my friend, Liz. She lived a few blocks away from me in NYC so we were allowed to walk to each other’s homes by ourselves. This meant that we knew each other’s families quite well. One day, when Liz and I were ten or eleven, I was at Liz’s house and noticed that her thirteen or fourteen-year-old brother was hanging around the house in his bathrobe on a school day. I asked Liz what was going on and she told me that he had been diagnosed with cancer (liver, I think).

Over time, I watched him lose weight and become like a walking, yellow-tinged ghost. Every day when Liz got on the school bus, I would ask her how her brother was doing. One day, the answer was, “He died this morning!”

I remember being stunned and not knowing what to say. Liz never talked about it much, but I always had the feeling that her parents never fully recovered from their loss. From then on, the house always had a sadness in the air. Liz grew up to become a doctor.

When I was fifteen and my Dad was 73, he was diagnosed with intestinal cancer and had a large portion of his upper intestine removed. I remember doing homework in his hospital room and getting friendly with his nurses. All the cancer was removed, with large margins, so thankfully, he didn’t need any chemo or radiation. While we were quite anxious before the surgery, afterward we were confident that Dad would be okay. He got prostate cancer in his late 80’s and died three weeks before his 90th birthday. 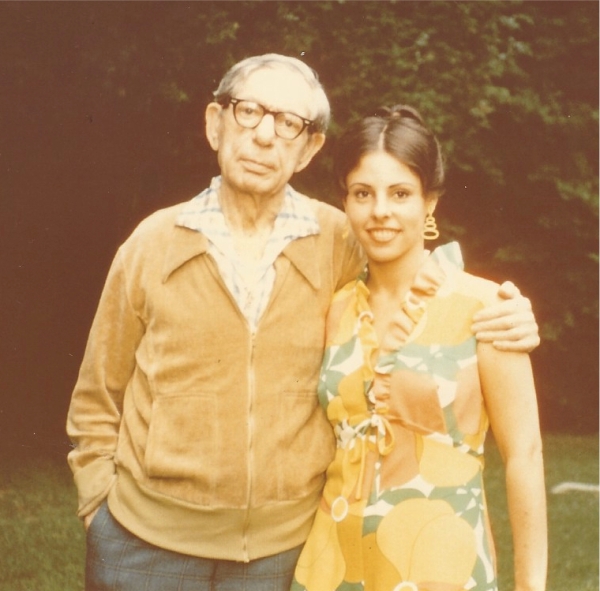 Me and my father when I was about twenty.

Therefore, this experience was not as traumatic or prolonged as it could have been for my family. Post-surgery, the biggest change in our lives was that he could only eat small portions and my mother and grandmother spent the rest of his life trying to entice him to eat more and gain weight. He had been thin anyway, resulted in our kitchen overflowing with great desserts — 24/7.

The next year, when I was sixteen, Joy, a sixteen-year-old girl who lived in my building,  was also diagnosed with cancer. My relationship with her was tumultuous and I think she was either bipolar or a sociopath, or both. She was wild and impulsive and was always in trouble, but she was also very smart, talented in drama, music, and art. And very funny.

I enjoyed her company most of the time and we spent a lot of time in each other’s apartments for several years. She was the only person, other than my mother, who could beat me in jacks.

I remember her chemo treatments and the horrible side effects, including the loss of her hair. But she embraced weird hats and scarves for her head and fought hard to maintain a relatively normal life. I think she went into remission but soon the cancer was back and the prognosis was not good. At this point, she had a boyfriend who was very protective of her and wanted to take care of her. She wanted to marry him and spend the rest of her time living with him (in those days you had to be married to live together).

So, while she was only sixteen or seventeen, her mother consented to their marriage and rented them an apartment nearby. Once Joy moved out of the building I saw much less of her but her mom kept me and my mom updated about her condition. She didn’t last very long and died at seventeen, as she wanted, with her boyfriend by her side. I remember the funeral and my heart broke for the family.

She was now the second teenager I knew who died of cancer. I was only seventeen!

When I was in eleventh grade and still seventeen, my closest friend was Anne, who also lived a few blocks from me. We spent a lot of time together and when her mother was diagnosed with cancer, Anne’s parents decided that I should be the one to tell Anne the bad news. Why they couldn’t tell their own daughter is beyond me. Moreover, why my parents, both of whom were therapists, went along with this scheme is also a mystery. Anne’s parents pleaded with me so I sat Anne down in my bedroom and gave her her mother’s diagnosis and dim prognosis.

I watched Anne’s mom go from an energetic career woman to a fragile shadow in a bathrobe, tied to her bed. I held Anne’s hand through the dying process, the funeral and the recovery period for her and her father.

Then, unbelievably, when we were both eighteen and in twelfth grade, Anne’s father was also diagnosed with terminal cancer. This time her father and his sister came to me and again, pleaded with me to be the one to tell Anne, which I did. Although her dad had no symptoms at the time of his diagnosis, he was gone within three months, before our graduation from high school.

It was tragic that Anne lost both her parents in under two years, while she was still in high school. We stayed friends for a few years in college and then we lost touch. I only reconnected with her via email in 2007 when I got her email address from an alumni publication. I discovered that Anne became a successful lawyer, married and had two children and seems to have had a good life, despite the untimely loss of her parents.

I was lucky that most of these cancer experiences were vicarious and I’m sure that many families have personally suffered numerous cancer losses within a short period of time. I’d like to think that these collective experiences somehow influenced my character and my perspective.

Maybe I appreciated life a little bit more entering my adult years. Maybe I developed more compassion for people who are sick, as well as for their families. Maybe I was a more conscientious and considerate caregiver when my mom had cancer, from which she died.

Maybe I’ve had more empathy for my friends who have had to be caregivers for old and infirm parents. I just hope that something good came out of all the suffering I witnessed during my formative years and that I’m a better person because of it.