Democrats keep thinking — erroneously — that you can counter Trump with truth. By presenting accurate information. By countering his wild, unsupported claims with facts. Surely if we show up his lies and deceptions, his followers will realize he is a blowhard demagogue with no actual accomplishments or ideas?

Problem is, people don’t follow Trump because they believe what he says. They neither know nor care whether or not he is telling the truth.

Trump supporters do not care about facts, truth, right, or wrong.

They don’t care if he’s making it up or talking out of his ass. They do not even care whether or not he has any intention of keeping his promises. Nor do they care when he changes what he says whenever it’s politically expedient. They don’t care if he has no platform or proposed plans. And quite probably is completely amoral or immoral … and possibly, a traitor.

When Trump said “I love stupid people” it may have been one of the rare times he was telling the truth. 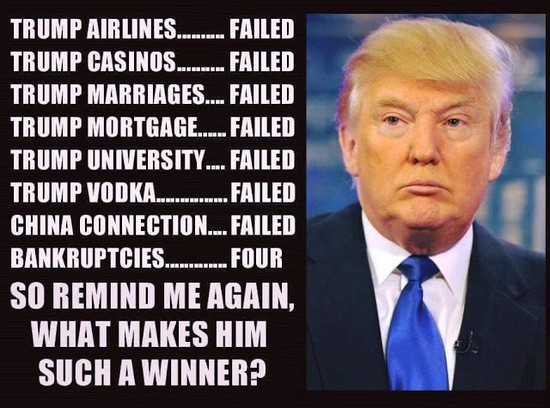 And then Donald J. Trump tells them that only he can fix things. Only he. He is the man, the only person who can make the world right.

We call such people dictators. Donald Trump does not want to be President. He wants to be king.

And because ‘his people’ do not care if he can or will fix anything, having someone powerful agree with them and tell them they are right is enough. They will vote for him because he validates and affirms them. He makes them feel good. Empowered.

This is how Hitler took over Germany. This is the demagogue’s playbook.

Donald Trump won’t make America great again. America is great. What he will do is tear this country to pieces, set neighbor against neighbor, race against race. He will eliminate centuries of diplomacy and relations with other countries and make us the laughing-stock outcast nation of the world.

Oh, and we’re going to hand him the nuclear codes. That’s a swell idea.