THE SLOW COOKER THAT WOULDN’T COOK

I only bought the slow cooker about a year ago. It was larger than the other one I had, which is small. Some meals needed more room than the three-quart unit. I didn’t use the bigger one very often until Owen moved in. After the household went from two to three people, we needed a larger version. Also, when I was company  (remember those days?) or making a double batch of chili., it made stirring easier. I think, in the course of a year, I used it half a dozen times.

There’s nothing much to using a standard slow cooker. You put the food it with a moderate amount of liquid. You turn the temperature on to hot and later, turn it down to medium or low. Some hours later, turn it off. The food is ready. It was a great tool when I was working because I could put food into it when I left for work and when I got home, presumably the same day. Cooking food overnight didn’t damage the pot, but rendered the food tasteless. Yes, you really can overcook even chili or pasta sauce, but it requires a serious determination to cook it is for a really, really long time. I was never that determined.

Last week I made a pot roast in this pot and it got rather overcooked. The “hot” part of the settings was a lot hotter than usual and the pot roast, which had been sizeable, shrunk to a most petite — albeit tasty — dish. I though the shrunken piece of beef was because I’d cooked it too hot or too long, though it was not cooking for all that long. Just about four hours which ought to be on target when using a slow cooker. Normal for a pretty big pot roast, right? It was perfect, if rather shrunken.

Tonight I made another pot roast. Same pot. Same recipe, except I added potatoes because they needed  to be cooked. Plus a chopped yellow pepper and an onion. With chicken soup and some tomato sauce as for liquid — the same stuff I used before. I turned it on at 3:28 pm in the afternoon and went off to take a shower. An hour and a half later, I took a look at it. The potatoes were completely uncooked. The meat was uncooked. Even the onion and the pepper looked raw. The pot was hot, but nothing was cooking.

Slow cookers last forever or — I guess — die in a hurry. They are essentially indestructible as long as you don’t drop them or let them run dry and burn. A half hour later, I looked at it again — and everything was still raw. The pot was hot but the food wasn’t cooking. What? How does that happen? How can that happen? 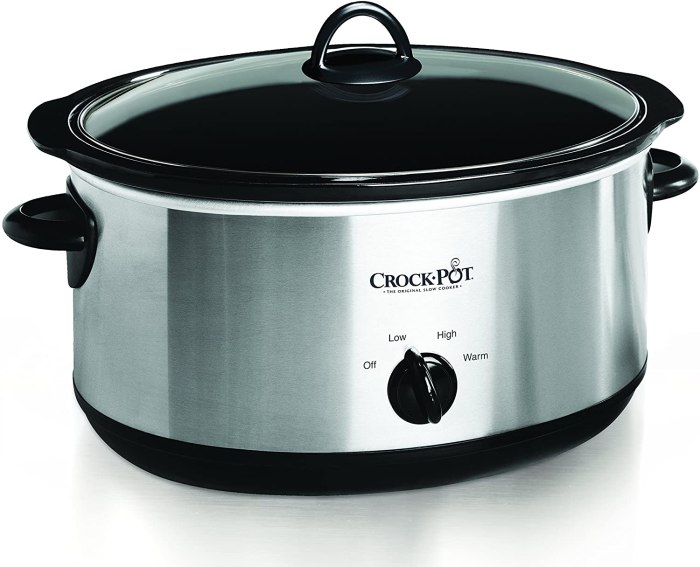 We took the roast out of the slow cooker, put it in a pot on the induction cooker and put the potatoes in the microwave. An hour later, everything was done. This left me baffled about the slow cooker. Do I keep it and pretend it will work next time? Do I figure this was just a bizarre glitch? That didn’t make sense. Finally, after a lot of puzzled discussion, we agreed to toss it.

Slow cookers don’t “glitch.” They aren’t complex electronic devices. This had four levels: off, warm, medium, and hot. You put in the food, you turn it on and after a while, you have dinner. Short of forgetting to plug it in, there isn’t a lot you can do that would cause it to fail. In fact, over the years I’ve owned a slow cooker, I’ve never had one fail.

So if you have a brilliant idea about what would cause a slow cooker to get hot, but not cook the food, I’d like to hear your theory. That the pot was hot but somehow, that heat didn’t transfer to the food makes this peculiar. I’ll accept any rational answer with which you can come up. I’m ready to listen. Meanwhile, does anyone want an emotionally confused slow cooker? I have one. Free.

Good luck with your pot roast.