A RAINY DAY WITH DOGS

It’s pouring. Again. Cold, too. Like yesterday and so many other days this spring.

Our dogs do not like rain. They are fine in snow and a drizzly rain is not an issue. The downpours, though? They don’t like them, not one little bit. Normally, they are solidly housebroken, but when the rain is coming down in torrents, they will look for a place to go. They prefer hardwood or linoleum, for which I thank them. No rugs or furniture. They mess up, but they are tidy about it.

Figuring out when they will need to do their business is our business. Being Senior Citizens, we have a fairly frequent early morning bathroom schedule of our own, so it’s not like we are deep in sleep and can’t make it to the other part of the house.

I woke up at 4:30, but that’s too early. No point in sending them out. I may be awake, but they are sound asleep. They won’t be awake until the light comes up. I do my thing and go back to sleep, awakening an hour later.

Five thirty. It’s light. Morning again. Pouring rain out there. I can see it running down the back stairs from the deck like little rivers. I go out to the living room. “Good morning, kids,” I say, looking pretty perky for that early in the day. “How do we feel about going out?”

The look at me. Dead eyes. Not even an ear twitch and certainly not a wag in sight. “You have to go out.” Bonnie — in slow motion — gets off the sofa and stands in the middle of the living room staring me down. She isn’t going anywhere until I give her appropriately firm (and loud) instruction to do it. Gibbs, on the other hand, has dug himself between the cushions on the loveseat and he is using his super-power to become a fifty pound Scottish Terrier.

Over at the couch, without a lot of sympathy (too early for sympathy), I grab the collar, give it a tug. Now they are both on the floor. At the top of the stairs. Awaiting further orders. 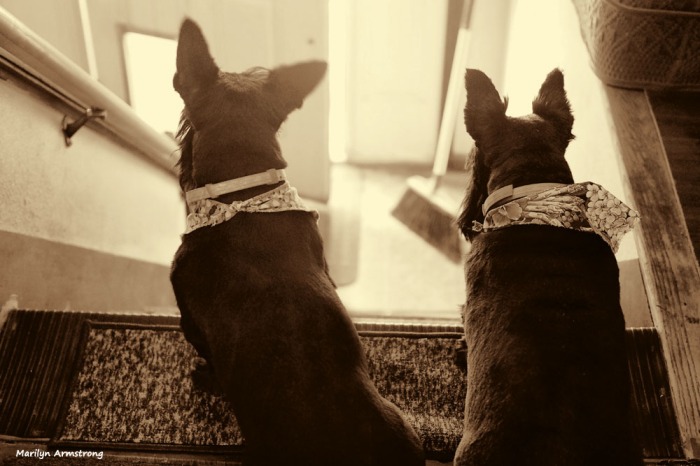 “OUT!” I say. Down they go. Bonnie, just a few steps. Gibbs, to the entry hall at the bottom. Then they stare at me. We’ve got a doggy door and they are in and out of it hundreds of times every day. They know what I want. They KNOW. No one can tell me they are unaware of the process in motion,.

“OUT!!” I say, but louder this time. Gibbs makes a graceful exit, but Bonnie is still staring at me, mutiny clearly on her mind.

“Bonnie … ” I say. There’s the warning note that all children and dogs recognize. A mom is getting pissed off. She backs up towards the flap.

“BONNIE, DAMN YOU, GO OUT!” and very slowly, she turns around and finally lets herself out. I wait.

Ten minutes, two soggy dogs return. My first thought would be to dry them off, but I realize that they don’t care how wet they are. They expect payment and they get it. At which point I make a u-turn and go back to bed. I have a couple of hours of sleep awaiting me. Garry is on the next watch.

A couple of hours later, maybe around eightish? Garry is up and the process is repeated. Treats are given, Garry’s back in bed, digging in for a solid couple of hours. There’s no reason to get up. It’s cold and wet and in theory, the sun is up, but you couldn’t tell by looking out the windows.

Big, fat drops are drooling out of the solid gray sky. The dogs are probably back to sleeping too.

About an hour later, I hear growling and a pair of woofs. Bonnie has the deeper woof. The growl is Gibbs. They have gotten bored waiting for us and are destroying some toys. I listen to make sure they aren’t warning me of a delivery, but all I hear are more play sounds. By now, though, I’m pretty much awake and although I don’t want to do it, I might as well get up. I could use some hot coffee. And an English muffin. With ginger curd. It’s just like lemon curd, but derived from ginger. Don’t sneer at it unless you’ve tried it. Chivers is good but I favor MacKay, probably because I can buy it in the supermarket.

It’s still pouring while I brush my teeth. I hear the horn of a truck honk twice and wonder if it’s a delivery, so I hustle to look, but if there was a delivery, they’ve left by now. It’s a bit early for that. We are at the end of everybody’s run, so typically, we don’t see packages or mail until well after lunchtime. But the dogs are waiting for me.

I go to clean up Bonnie’s eye (she has a condition of unknown origin that requires daily cleaning and eye drops), but it looks perfect and shiny and clean. I wonder if maybe Garry took care of it when he was up (no, he didn’t). I give them Greenies, then a brown crunchy thing. Yum.  No idea why they like them … they are dry and tasteless. Finally one of those small stuff crunchies from Milk Bone.

Now, Garry’s up too, so they snag an additional cookie from him. That’s a big morning for cookies. Very big.

They are looking adorable, natty, and peppy. Time for a little play with toys, a bit of snuffling, growling, barking, huffing, puffing. Followed by a good solid sleep. Nothing much to do until the going out thing comes again.

Maybe the rain will slacken. The sky seems a bit lighter. Garry says has to drive into town, too. We’re running low on dog biscuits.