THE SAFETY OF HOME – Marilyn Armstrong

While I was starting dinner, I was watching out the window. Suddenly, a hawk with a white front swooped by the deck then winged off into the woods.

I followed him with my eyes. The camera was in the dining room and I didn’t hurry to get it. I knew I’d lose the hawk before I got the camera focused. Mostly, I wanted to get a good look at him before he disappeared.

I was curious why he swept so close to the house.

Hawks are hunters and don’t usually get so close to houses. It turned out, after minimal research, to be a Cooper’s Hawk. It wasn’t hard to find because among the white-breasted hawks, there are only two living here: American Eagles and Cooper’s Hawks. I’ve seen plenty of American Eagles. They are much bigger than this hawk, so Cooper’s Hawk it had to be. 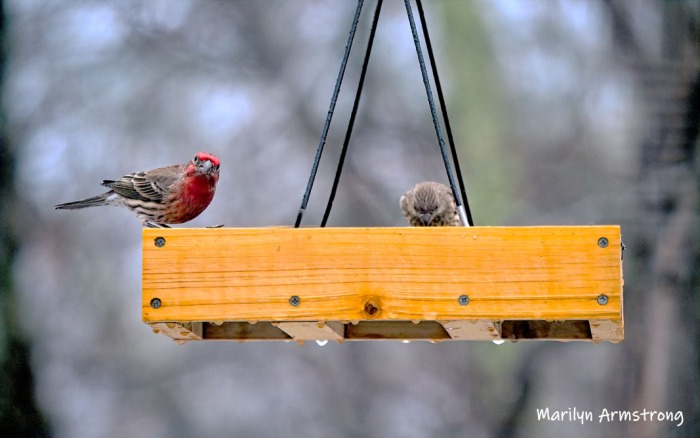 And he was hunting for exactly what was on my deck: birds and squirrels. Those are a Cooper’s Hawks two favorite foods. The deck is his perfect hunting ground, his dinner buffet.

This is one of the things I feared when I set up the feeders. We have so many predators in the area and so little prey. How did we get so out of balance? Doesn’t it usually go the other way? Don’t deer usually overtake the area?

I remember when we had so many chipmunks they used to line up and chatter at us in groups. Now, we never see chipmunks. We use to see rabbits sitting on the lawn in the sun in summertime. I haven’t seen a rabbit in years and until we put up the feeders, I hadn’t seen any squirrels, either.

Mice I know about because they invade our house every autumn. We have an annual battle to keep them outside. It’s not personal. It’s just that they make an awful mess in the house.

We also used to see more deer, but I’m sure the coyotes have taken them down. 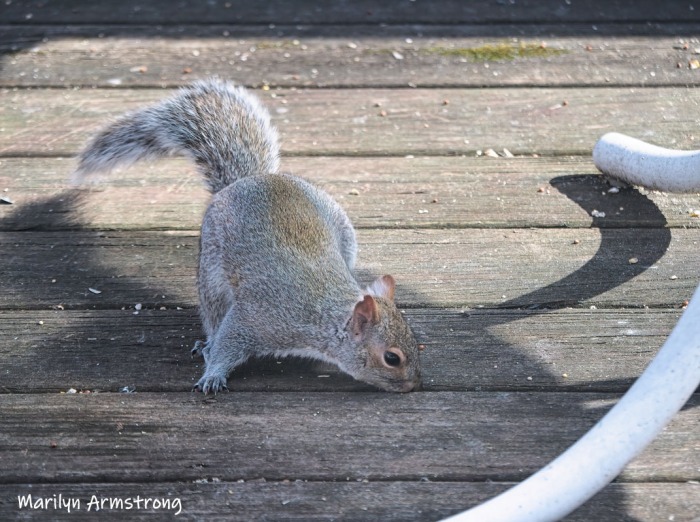 I wonder now if the reason the squirrels have taken refuge on the deck is that they think the house is some kind of protection for them from the hawks and the other predators. Is this house protection for the birds and squirrels?

I feel like I should invite them all in for a warm dinner and a comfortable nap, but I’m pretty sure the dogs wouldn’t get along with them especially well. It could get pretty raucous.