Not Welcome Anymore, by Rich Paschall

Roger was a busy guy.  In recent months he absolutely could not find time to fit one more thing into his schedule.  The local pastor, Jared, was even busier and usually kept to a tight schedule.  His time was parceled out like the hosts he distributed on Sunday.  So it was a bit of a surprise when he dropped an email on Roger asking to meet.  “Perhaps we can get together for coffee on Thursday afternoon or Saturday morning,” the message read.  Roger picked Saturday.

When Roger turned 60 he had promised himself there would be no more big projects.  He felt he was done with community organizing, large social events, and big family gatherings.  “All the work should be done by someone else,” he thought.  But then there always seemed to be another great idea and that meant “one last hurrah.”

When a long time and dedicated school worker was to be honored, many alumni were thrilled at the idea.  In fact, they wanted to put on a special tribute and all got together to discuss the matter.  Soon after Roger was handing the proposed event to the pastor, who seemed a bit skeptical at first, but eventually supported the plan.

It’s really a one way street.

The pastor was young and ambitious, as pastors go.  He seemed to like everyone and at first, everyone liked him.  He wanted to make an impact on the parish and if you could help him with that, he was your friend.  Soon he saw Roger and Roger’s friends as a path to increased alumni involvement and successful events.  He did not help organize in any way, but he did not hinder the progress.  For the alumni, it seemed like a great thing.  The pastor was letting them do their tribute the way they believed was appropriate.

On the other hand, the pastor’s staff was not a bit enthusiastic.  The school administration was already overburdened with projects and fund-raisers.  The grade school principal was also running the high school, or neglecting it, depending on where you heard it.  Teamwork was only something written on the gymnasium wall.  It was not practiced by those who loved to point it out.  They wanted to run the upcoming honor as a small event as they had done for others in the past.  They were not happy to share the event with “outsiders,” that is, former students.

The alumni crew worked diligently.  They looked for every way to promote the big event and make it a success.  They had been warned not to count on the school administration to do their part, but they trusted them to do what they said they would do.  When the administration looked overwhelmed at a request, the alumni chairmen would advise, “Just say no if it is too much.” Unfortunately, they were already in the habit of promising what they could not deliver.

When the big event was held, the school’s part was chaotic and ran behind schedule.  The alumni tribute was forced to start late, but went well and was loved by those in attendance.  In fact, it was the most well attended alumni event held in decades.  It would certainly be the last to draw a crowd.

When the reverend contacted Roger in the week that followed the celebration, Roger knew what the topic of conversation would be.  Since they had been friends from before the time Jared came back to be pastor, Roger thought they would have a meaningful conversation. 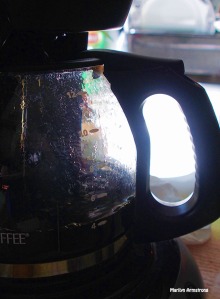 On the day of their coffee talk, it was cold and damp, rather like the expression on the pastor’s face.  He only put on a smile when a parishioner recognized him in the small coffee shop and came over to say “hello.” Roger and Jared sat in two large chairs with a small table in between.  Jared started.

“I was rather disappointed in the event last Saturday.  It did not go as planned,” Jared said with a bit of a scowl.  “I do not like things like that in my parish.”

Roger tried to explain what happened and how it happened and why it happened the way that it did.  Jared was not interested.  His purpose seemed to be to place blame and absolve his staff of any wrong doing.  “I hold you personally responsible because you brought the plan to me.  I do not care about co-chairmen or committee members or school administrators.  I blame you.”

It would be an understatement to say that Roger was in a state of bewilderment for almost an hour as the former friend declared that Roger was not to be involved in running any more events, in fact, “You are not welcome at any school events.  I will not tolerate anything that might embarrass me in the slightest way.”  Roger was not sure how anything that did not go quite right could embarrass someone who had no hand in running the event.

When Jared was done with his coffee, he advised Roger he could still come to services on Sunday.  Roger thought, “And I am still welcome to give to the collection,” but he did not say it out loud. He watched Jared walk out into the cold, grey day which was a perfect match for his attitude.

Roger only went back to the church one more time.  He came on Christmas to read as previously scheduled.  He wished his fellow readers, and friends well but said nothing about moving on.

A former classmate told Roger that her brother had decided to go to a different parish.  “The pastor there is warm and welcoming.  It’s something they forgot here.”  Roger smiled and nodded, but said nothing.  He left the church and walked out into the pleasant Christmas weather.  He thought of the irony of the assistant who invited him to come back home to the church 15 years earlier and the pastor who invited him to leave, since they were the same person.