I have to admit, the new Olympus camera I bought from a friend is without doubt the sharpest, fastest camera I’ve ever used. Anyone who says the tool doesn’t matter hasn’t used a really great tool. I’ve used a lot of cameras in the 50 years I’ve been taking pictures and next the the Leica (non-digital rangefinder) I had in the 1960s, the Olympus OMD EM-1 Mark 2 is fast and really sharp.

I’ve put this same lens on three different cameras — all OMD from Olympus and the difference is obvious. It doesn’t seem the best and fastest camera I’ve very use — especially since it’s working with a 300 mm f4 lens makes it all the more remarkable. It’s hard to believe it can really focus  that fast in relatively low light, but of the 99 pictures I took today, 99 of them were sharp. Some of them were stupid pictures of empty feeders, the birds having left, but they were sharp.

Nuthatch on a tree

Today I saw birds I’ve never seen before. They turned out to be the most common bird imaginable, but not here because these are not birds who love the woods.  From Merlin ID (Cornell Ornithological):

“The House Sparrow was introduced into Brooklyn, New York, in 1851. By 1900 it had spread to the Rocky Mountains. Two more introductions in the early 1870s, in San Francisco and Salt Lake City, aided the bird’s spread throughout the West. House Sparrows are now common across all of North America except Alaska and far northern Canada.”

These are typically urban birds, but they are highly adaptable and will go wherever the feeders are. We have feeders. Today, I met the House Sparrow. 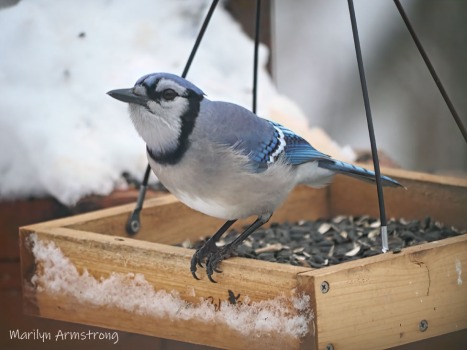 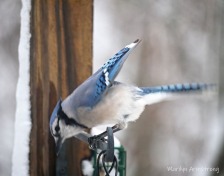 We’ve also been experiencing a deluge of Blue Jays. At one point, there were six of them — and these are big birds — on my small (10″ X 10″) flat feeder with more of them marching around the deck eating as many of the seeds I threw into the snow for the “walking birds.” The Juncos will eat from a feeder, but they prefer walking, along with the Blue Jays, and the Mourning Doves. All the birds will eat from the ground if that’s where the food it, but some definitely prefer footing it. The Doves can’t perch on a feeder. They are too big and built wrong. 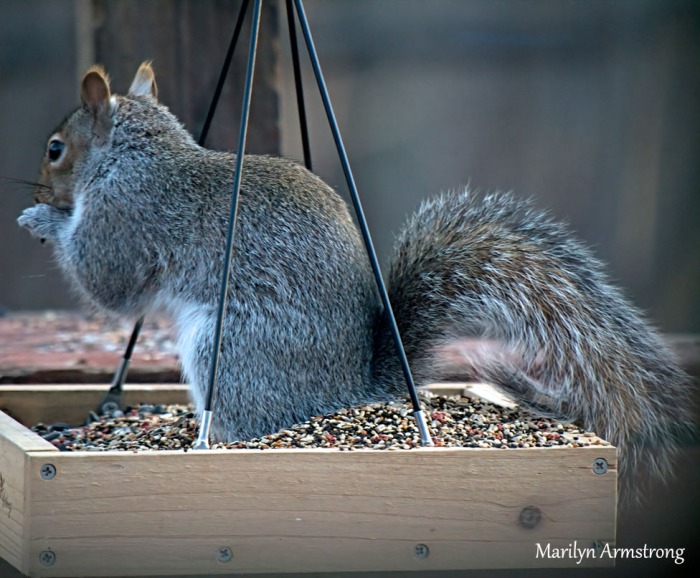