Hurricane Arthur (spirit of Arthur Fiedler?) changed the schedule. With the hurricane heading up the coast and thunder and lightning racing in from the west, the festivities were moved up by 24 hours. The fireworks went on early, barely ahead of the weather. WBZ didn’t have all their cameras ready and had to show the first half of the display from the helicopter cams. After a while, the rest of the cameras came on and it was even better than last year.

The live 1812 Overture was preempted by a massive lightning storm. Instead, WBZ broadcast a taped version (dress rehearsal?). Which was fine.

For the historically challenged, our Guv (Deval Patrick) offered up some history, what the music is about. NOT our War of 1812. The war going on across the pond. Napoleon. Russia. I think this was the first time I’ve seen them do that, so everyone got a bit of remedial European history.

No place does Independence Day like Boston. It’s our holiday. The rest of the country is a Johnny-Come-Lately. It happened here. The Declaration of Independence. The battles of Lexington and Concord.

Boston knows how to hold a party … and let’s not forget the howitzers, the most important instruments in the 1812 Overture. Nothing says independence day like artillery. 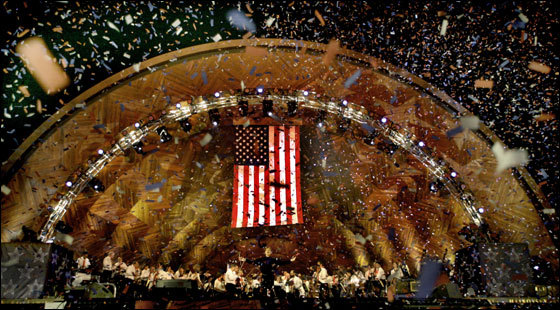 When we lived in Boston, we could see the fireworks and hear the concert from our balcony in Charles River Park. It was one of the perks of living in Boston. If we wanted to get closer, we could stroll a few hundred yards west enjoy the party from the Arthur Fiedler footbridge over the Charles.

It was the best view in town. Watching it on television is okay too, now that we live in the country and getting into town is out of the question. Still, being there was the best.

Boston has had a pretty good year. Nothing awful — other than the appalling collapse of our World Champion Red Sox — happened. Even more reason for us to get together and have a gigantic party to celebrate America’s birthday. The rain has put (ahem) a bit of a damper on it, but we’re adaptable. 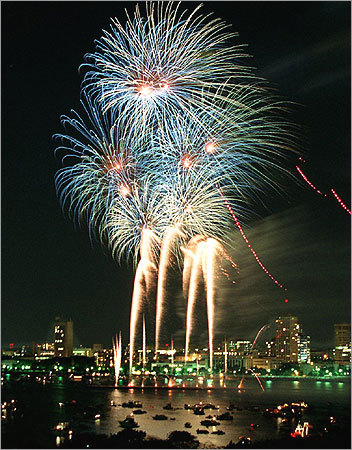 Now it’s time to watch Yankee Doodle Dandy again. We always watch it. It’s part of our personal celebration of being American.

When Garry and I were growing up in New York, the old Channel 9 had Million Dollar Movie. It was on not only every day, but several times a day and it played the same movies for a full week. The theme for the show was “Tara’s Theme” from Gone With the Wind. I had never seen GWTW, so when I saw it for the first time, I said “Hey, that’s the theme for Million Dollar Movie.”

I wasn’t allowed to watch TV on school nights and even then, only for a couple of hours on Friday and Saturday night. But, if I was home sick, I got to watch all the television I wanted. Better yet, I got to watch upstairs in my parents bedroom. The television was black and white (as were all televisions then). I don’t know if color TVs had been invented, but if they had been, no one I knew had one.

Channel 9 with its Million Dollar Movie was the movie channel, so whatever they were playing, I saw it a lot. They didn’t have a large repertoire. Odds were good if you got sick twice, you’d see the same movie both weeks.

Thus “Yankee Doodle Dandy,” the great James Cagney docu-musical was engraved in my brain. I believe that during at least three sick weeks (tonsillitis was my nemesis), I watched it repeatedly until I knew every word, every move, every song — except for the pieces the station randomly removed to make room for commercials.

No one danced like Cagney. No one had that special energy! Believe it or not, I never saw any other Cagney movie until One, Two, Three came out many years later.

Tonight, we’ll watch James Cagney dance down the steps in the White House. We always replay it half a dozen times. Can’t get enough of it.

In case you feel the same way, I’ve included it so you can replay it as many times as you want. Cagney won his only Oscar for this performance. I never knew he played gangsters until many years later. Million Dollar Movie didn’t play gangster movies.

Only one questions remains unanswered through the years. How come they didn’t film it in color? Does anyone have a sensible answer to that?