It’s Frisbee Wednesday again. How time flies! Last time I looked, it was barely spring. Then whoosh, summertime. Now, summer is beginning to wind down. The flowers that bloomed in the spring (tra la) are fading away, holding their collective virtual breath for the riot of color and energy that is Autumn.

But not yet. The whole month of August remains which we must traverse. Then, a week and a bit of September will pass until we whirl into prime time and the trees show color.

HEART OF TOWN: THE PARKING LOT

Last night, we watched “The Quiet Man” on Turner Classic Movies. After the movie, Robert Osborne did a wrap up. He talked about the citizens of Cong (Ireland, County Mayo) where the movie was filmed. How the local folk were so excited to have a movie company in their midst, it was difficult to keep them off the set. They were always peeking out of windows, hiding behind buildings, trying to catch a glimpse of the stars. It was the biggest — only big — event to happen in Cong.

We visited Cong on our honeymoon in 1990. They were still reliving the grand days when John Ford came to town with his cameras and crew. Most important, he came with John Wayne and Maureen O’Hara. Nothing else ever happened. Or ever will.

I said to Garry: “Nothing has ever happened in Uxbridge. Not a film, not an episode of a television show.”

“We had one pretty juicy murder,” he pointed out. Ever the reporter, Garry keeps a mental tally of murders in the commonwealth. Catalogued by town.

“Okay, other than that one murder. I don’t think anything has ever happened here more memorable than the day the bank card readers went down.”

“That was a traumatic day,” Garry agreed. 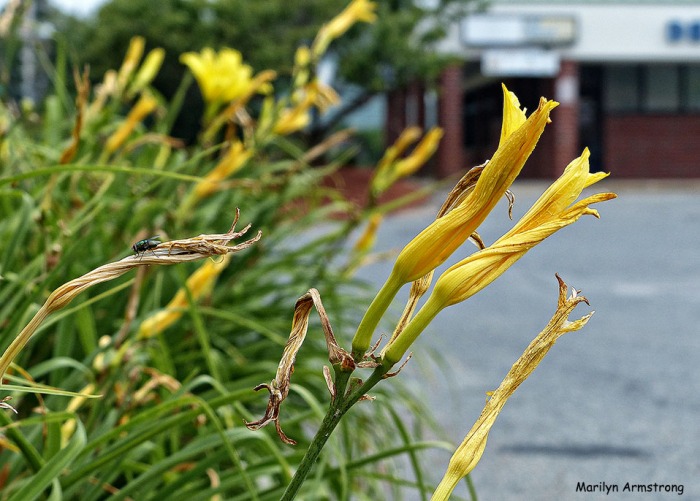 A fly photo-bombed my picture!

To further my point (or perhaps, beat it to death), we went to Hannaford today. It is our grocery store. It’s where it all happens. Where we gather to discuss upcoming weather events and the price of things. Garry wanted to pick up a newspaper and replace our depleted supply of kitchen cleanser.

I wanted to snap a few pictures.

We succeeded at both.