We aren’t supposed to feed the birds. Not the swans or the pretty feathered ones. They are supposed to survive naturally. So I never put a feeder up. And I felt guilty every winter when I saw the poor frozen birds huddled in the bushes in the backyard.

This year, I said “Screw natural. We’ve destroyed their environment. We’ve killed the old forests and burned much of the rest. We’ve poisoned them with weed killer and let our pet cats eat millions of them every year … but we can’t feed them? Nuts to that.” 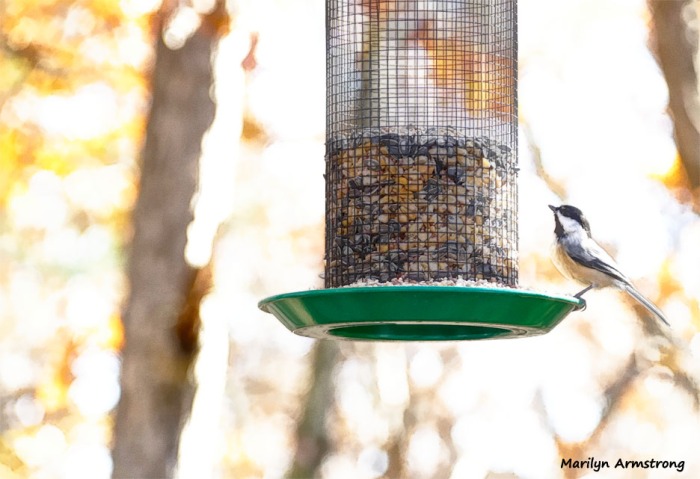 I decided it was the least I could do.

The latest climate report came out today. Because it’s Black Friday (which Garry called “Racist Friday”) and we are all supposed to be shopping (and no one I know actually was shopping at least partly because there aren’t a lot of places to shop), so maybe we’d miss that the entire report is nothing but bad news.

I wasn’t surprised. It has been pretty obvious that our environment is changing fast. Fires and floods. Spring and fall have gone missing. The bitter cold came too soon with snow in early November. Ocean water is more than 9-inches higher than it was 50 years ago.

There’s less snow in the mountains, so the drought in the west is probably permanent. It gets hotter and stays hotter longer each year and sooner rather than later, the crops will start to suffer. I think no matter how hard they try to manipulate the DNA for seeds, when it gets hot and stays hot, and doesn’t rain … the crops will fail.

People will die from the heat, die from lack of water. Eventually, people will also die from hunger. Rich people will survive longer, but sooner or later, the climate will get us all. Unless we go back to doing sensible things to deal with it. We can do it, but it’s not something any of us can do individually.

This needs to be a regional and national effort. This is why we have governments. They are supposed to care for us. It’s why we pay them money. I don’t think the idea was that we should pay them money so they can buy bigger private planes.

We need to get the big Orange Fool out of the White House and start taking care of our planet. While we can.