All the Eastern coast kits live down south, from Mississippi through Florida and out towards Louisiana. It’s not that we lack for hawks around here. We have both Golden (relatively rare as they prefer mountains to valleys, but sometimes you can spot them high above you, especially if are in the White Mountains in Vermont, Maine, New Hampshire, or Canada. 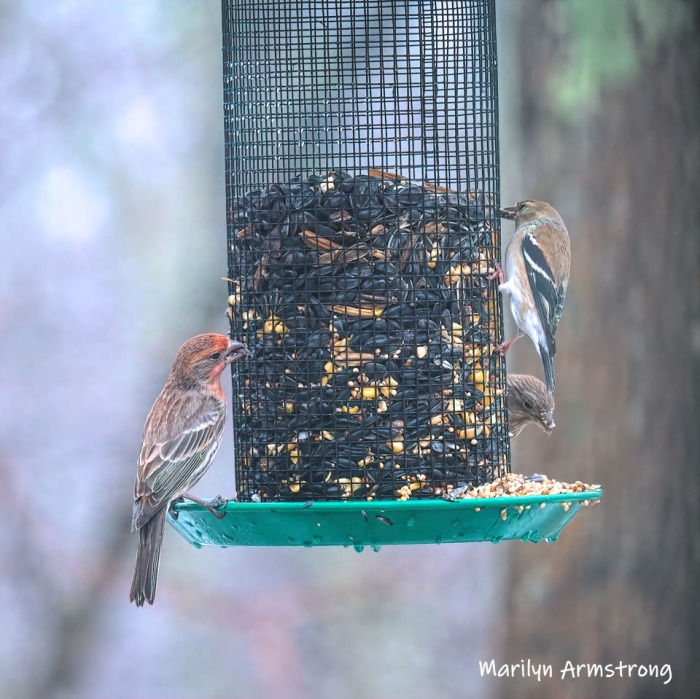 No hawks, safe to feed!

We see a lot of American Eagles, especially along the Merrimack — a much wider, slower-flowing river with lots of big fish and pollution to make me wonder if people really eat those fish. Nonetheless, many people nearby have boats and fish the waters of the Merrimack.

American Eagles are lazy. Rather than do their own fishing, they station themselves in trees along the river, waiting for someone to catch their dinner. Then they drop out of the sky, grab the fish and fly off. I’m sure they are mentally grinning. Note: Beaks don’t smile. 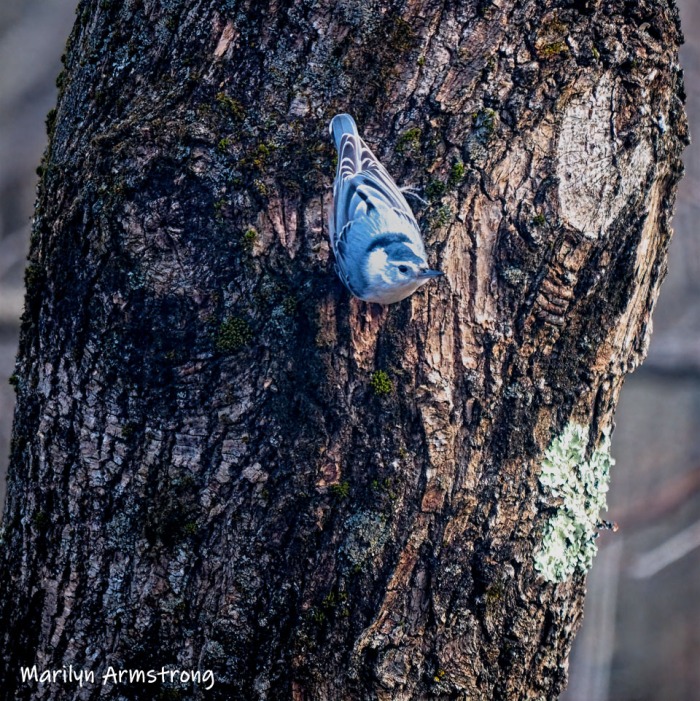 Nuthatch on the tree

Very few people have enough character to fight off an eagle’s talons for a fish. Even a really big fish. American Eagles are not the biggest of eagles. I think the Golden is at least twice its size and there are some eagles in Africa and Asia that are also huge. Still, the talons on our Bald Eagle are no laughing matter. 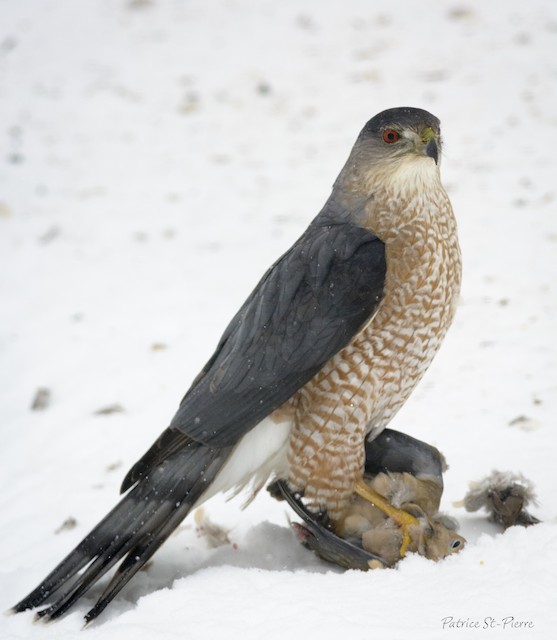 I wouldn’t mess with them. I’ve been gored by a Cockatoo who wasn’t nearly as big as even a very small eagle and I nearly lost my thumb.

Birds have a lot of power in a lightweight body.

It’s rather like arguing with a bear over a basket of berries you are carrying across the moor. You can get more berries. You can buy them in the grocery store. Meanwhile, the bear doesn’t need a credit card and like the eagle, he’s glad enough you did the berry picking. He can as take your arm AND the berries for a healthy, balanced dinner.

Don’t run from the bear. Politely put down the basket and quietly stroll off. Don’t whistle. That might irritate him and an irritated bear is … well … an irritated bear. Even a small bear is a lot bigger than you are, so be nice, quiet, and go home. Light incense. Consider not scouring the fields for wild berries. 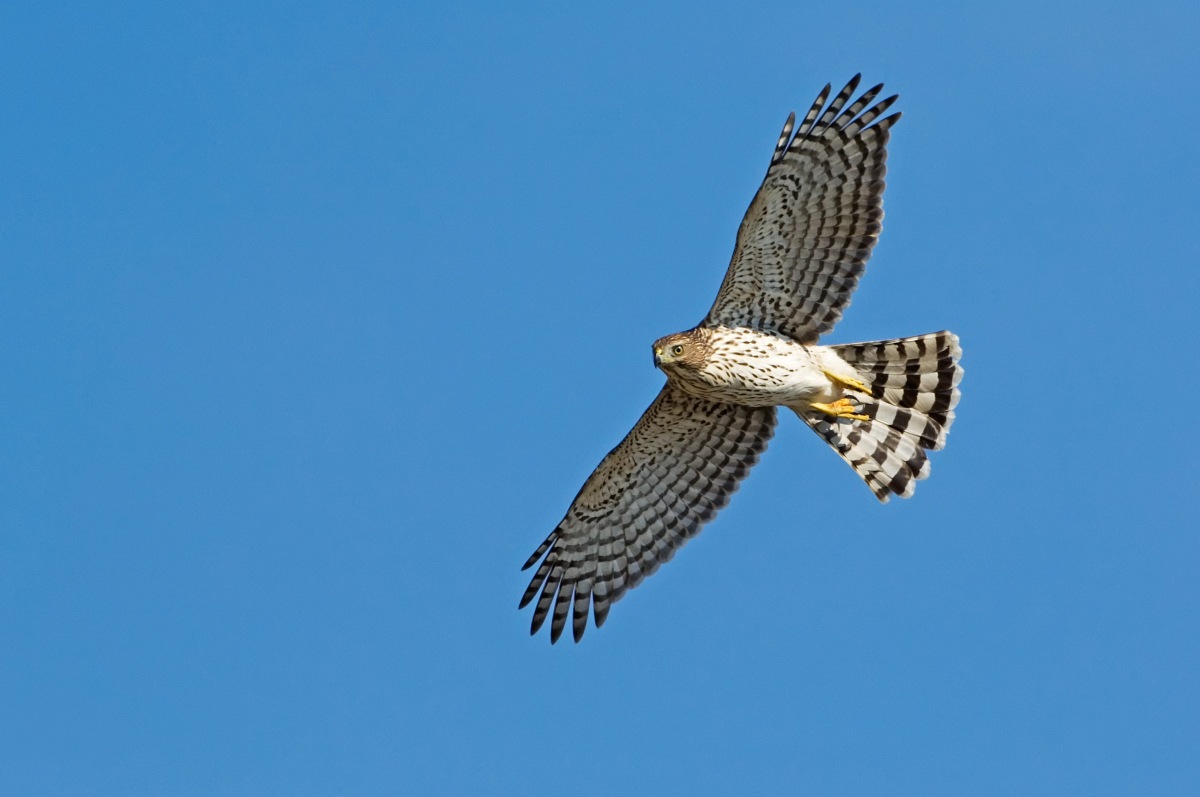 The closest we have to a kite here is the Cooper’s Hawk and its close relative, the Sharp-shinned Hawk. Both of these small hawks used it live largely far from humans.

Until the arrival of bird feeders. Since both of these hawks are bird hunters and considered remarkable fliers when they discover a feeder and do their famous flap-flap-glide through forest and bushes — there are those who believe these hawks could thread a needle by flying through its eye — the scare the feathers from the birds. 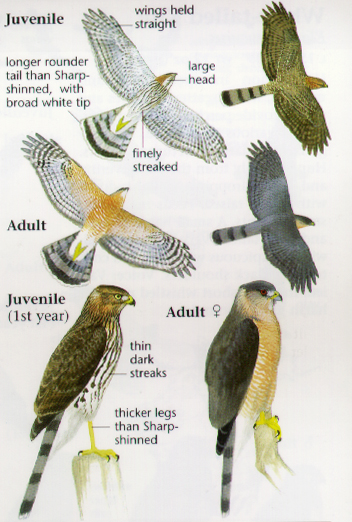 For reasons best known to the Mourning Doves, they least terrified of these small hawks (listed as “kite-like” in my “Peterson’s” guide). Doves are not the smartest birds in the coop.

Regardless, a single passing swoop by one of the two bird-hunting hawks, and the birds are gone. They don’t just disappear for a few hours. They are gone for days and if the Hawks are active, as long as five or six days.

Which is what the Cornell Institute and Audubon Society both suggest you do if you find that the Hawks have become a problem. Which is to say you have actually seen them more than once. They are not easy to see, either. They are exceptionally skillful fliers. The diver between trees and hedges and in fact, when they miss, they are frequently crushed because they hit a tree chest first. I guess seatbelts would not help all that much. 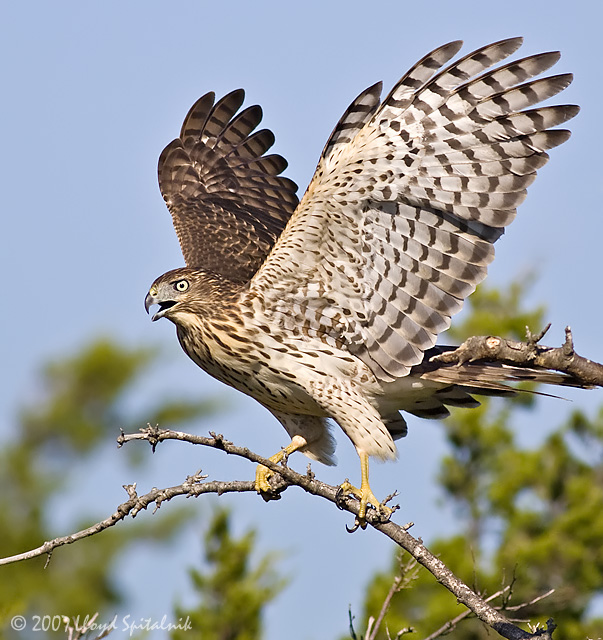 It’s not that we don’t believe every creature deserves its dinner, but most of us don’t want to be setting the table for this particularly gastronomic feast. We invited the birds to come and chow down, so when it’s obvious that we’ve set them up as someone else’s main course, it takes a lot of the joy out of the party.

We also don’t fly paper kites around here. The trees, abounding as they do with bird life and trillions of insects, have their own killer instinct and will happily eat your kite.

The last time I flew a big kite, it was down on Cape Cod. The wind caught it and over the waves, it flew. Eventually, I ran out of string. I had a couple of thousand feet of thousand-pound nylon cord, so it was far away. Way beyond the breakers and invisible.

There was no way I could bring it home. The outbound wind was strong and had taken it way out to sea. We could not see it. I cut the string and let it fly.

I wonder if anyone found it and pondered where it had started? In case it was you, it was on a nearly deserted beach in November on Cape Cod.