Home › Anecdote › THE JOYS OF DOORMEN – BY ELLIN CURLEY

THE JOYS OF DOORMEN – BY ELLIN CURLEY

I lived in New York City for the first 40 years of my life and since then I’ve lived in the woods in a small town in Connecticut. So I have a good perspective on life in the city versus life in the country.

To be honest, there’s very little about city life I miss, except for being able to go to the theater without spending hours sitting in a car, stuck in traffic. However the one major perk of city life that makes me wax nostalgic, is the pleasure of living in an apartment building with doormen. Now, most people would probably not think of doormen as a big selling point for living in New York City. That’s because doormen are the best-kept secret among us long-time New Yorkers.

There’s a special relationship that often develops between friendly residents and chatty doormen. You get to know each other well and become like a family. These men know a lot about your life from the comings and goings in and out of your apartment. And people tend to talk to doormen, almost like they do to hairdressers. Mine knew my kids, my mom and my friends in the building, which created a strangely intimate relationship. They knew when we were doing work in our apartment, like when our upstairs neighbor’s bathroom leaked and our bathroom ceiling fell in. They followed every skirmish in our battle with the insurance companies, which lasted two years. 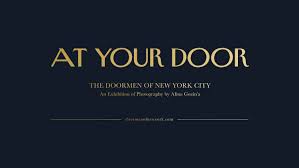 Photo book of doormen in NYC

Memoir of a doorman

Novel about doorman in NYC

I’ve experienced this relationship as a child, as an adult and as a parent of young children. Each phase is unique and gratifying. As a child, every doorman knew my name and often the names of my friends who visited frequently. I had severe school anxiety so waiting for the school bus in the lobby every morning could have been a tense time for me if I hadn’t had a doorman to distract me and keep me talking. Jimmy was my favorite for many years, a tall thin man with a missing tooth who made me look forward to the morning wait for the bus. If I was running late, he would make the bus wait for me and would call up to our apartment to tell me to hurry up.

The doormen also helped the kids in the co-op bend the rules so we could play in the street. They let us skate and ride bikes in front of the building, which was strictly forbidden. They were our lookouts, warning us to stop if someone on the co-op board was entering or leaving the building and might ‘report’ us.

When my kids were young, we lived in a different building, all of two blocks away from the one I grew up in. But the next generation of doormen, they were as wonderful to my kids as mine had been to me, and they too developed a strong bond.

Their doormen let them skate, skateboard and practice gymnastics down the long, narrow hallway leading from our elevator to the lobby. I could send the kids downstairs to play on their own and know they were safe and supervised. I had built-in babysitters.

They often let my kids spy on people in the elevators on the security cameras they kept behind the lobby desk. For some reason, that was a huge treat! 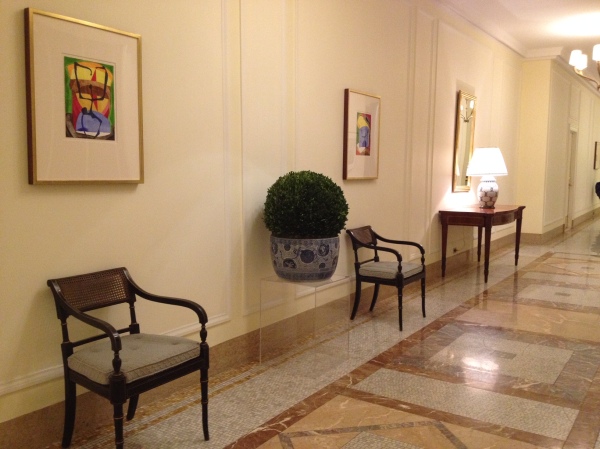 The long hallway in my apartment building

Once our doormen went above and beyond for my ten-year-old son, David. David had a pet python and there was a large ficus tree in the lobby. David thought the snake would have fun climbing around in the tree so the doormen let David sneak the snake into the lobby and, when no one was looking, put it in the tree. David and the snake nonchalantly hung out in the lobby for several hours, with people coming and going, until someone finally noticed something moving in the tree. That ended the tree climbing experiment.

The lobby decor has changed but the ficus tree is still there!

As an adult, there are a myriad of other reasons for enjoying the luxury of having a doorman. They accept deliveries for you when you aren’t home and help you with your bags.

Another convenience, beyond mere safety, is they let workmen into your apartment when you aren’t home so you don’t have to wait for them to show up or give them your keys.

\You also feel safe knowing the doormen monitors everyone who comes into the building. They won’t let anyone up to your apartment without your approval. They are your first line of defense against predators and nuisances. 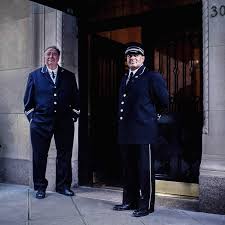 In the country, I’m friendly with the local post office workers, farmer’s market cashiers and with the people at the nearby coffee shop and market. It’s not the same thing. It’s not as personal. These people may like you, but they don’t know your life or have your back like doormen did.

Doormen are a special breed of extended family that I treasured as a New Yorker and I miss as a country dweller.