I was planning to make chili. In fact, we had just come back from the supermarket and I had brought it all home with me. The fresh meat, the chili beans. Big sweet onions. Diced tomatoes. We had not finished unpacking when the phone rang.

Indeed she was. By the time she brought it upstairs, she could hardly breathe and all I could say was “Are we sure that’s lamb? It’s gigantic.”

“Yes,” she said, leaning on the fridge and trying to breathe. 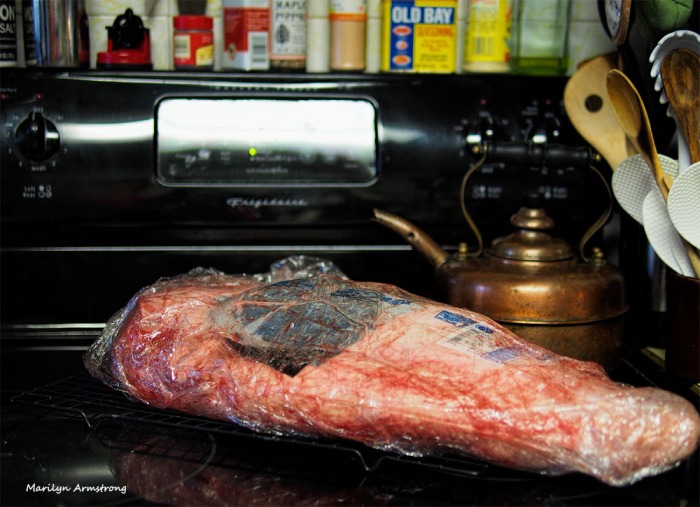 I cleared out the bottom shelf of the refrigerator. By angling it slightly, we got the door closed, but it wasn’t easy. Sandy went home.

Garry and I ate dinner. No big surprise that I was thinking about lamb. I went online to see the latest greatest advice on cooking bone-in leg of lamb. I was pleased to see we have gone back to the “torch it for 15 minutes, then cook the rest slowly” which is how I learned to do it rather than the “medium heat and cook it until it is gray, tough, and flavorless.” The newer information suggests serving it medium rare, at about 135 degrees on the thermometer. The previous generation of lamb recipes says 160 to 170 degrees. Which is desiccated and, in my opinion, inedible.

Some sites are recommending using an oven roasting bag. What struck me was that there was no information on roasts larger than 10 pounds … and most seemed to believe that a leg of lamb will never exceed seven pounds including the bone. I knew I did not have a pan big enough to cook that piece of meat.

I confided my concern to Garry who suggested we weigh and measure it. He brought the scale to the kitchen and set on the stove. We hauled the huge roast out of the fridge and weighed it. The scale said eleven pounds, but I’m positive this scale always leaves off a couple of pounds, so I was forced to believe that my son had it right. Thirteen pounds. This would later be confirmed when we unwrapped it and there was a tag that announced it was a “restaurant cut full leg 13.13 lbs.”

Moreover, it measured 22 inches long. The biggest roasting pan I could find in any store was 17-1/2 inches. I wasn’t sure it would fit in the oven, much less the pan. Garry thought maybe the butcher at Hannaford might be willing to cut off the shank for us.

We had to go buy a few things anyhow, so nothing ventured, nothing gained. I needed a gigantic roasting pan. Extra extra-large turkey roasting bags. Fresh rosemary and maybe a few other fresh herbs. Heavy duty aluminum foil in the extended play version. A veggie to go with dinner. I had been planning to bake corn bread, but the change in menu suggested hot buttered rolls and something green. Which turned out to be spinach because we like it, it’s quick to prepare, and they still had some. Yesterday, the grocery shelves were over-flowing. Today, half the shelves were empty. Denuded. Locusts? No, just Christmas.

While we were at it, I bought little red roasting potatoes and a pound of bacon because we might as well all finish off the evening with a trip to the hospital to deal with pancreatitis, the result of massive over-indulgence in rich food. Sandy and Kaity are doing the dessert specialties and I had a mince-pie which I had promised Garry I would bake. (I did.)

Hannaford said “no way, absolutely not.” If you didn’t buy it there, they won’t touch it. Time for plan B. I called my son.

“It’s beautiful. It’s huge. It’s too big for the biggest turkey roasting pan. Do you have anything you could use to hack off a piece? I can deal with everything else, but it has to fit in the pan.”

“I have a Sawzall,” he said, uncertainly. “Not terribly sanitary, but it’ll cut through stainless steel, so I suppose it’ll cut a leg of lamb.”

“That leg will be roasted for hours after we cut it. That should sterilize it. I don’t think we have any other choice. Maybe a restaurant would have the right size pans and ovens, but we don’t.” 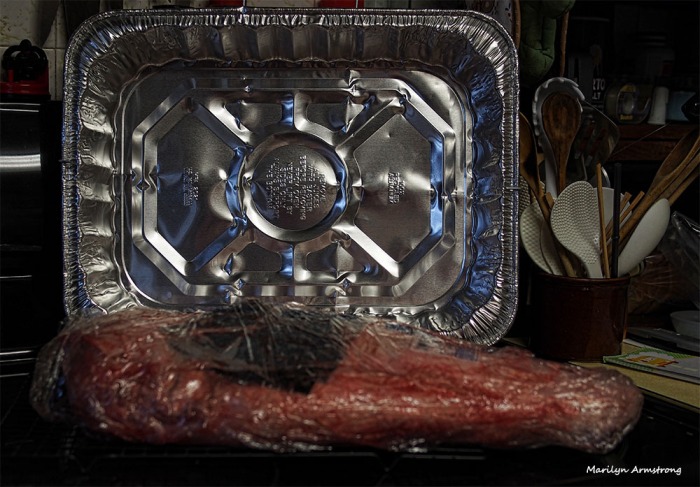 And so it went. Owen bought a new Sawzall blade, wrapped the rest of the saw in plastic. Then he and Garry wrestled the roast into submission and removed the top of it, which turned out to be a good size crown roast. I wrapped it up and stowed it in the freezer. Another dinner awaits.

I don’t know exactly how the day will shake out, but I’m sure it’ll be fine. Not sure if I’ll cook it in the bag or do the broil-then-slow-roast. I didn’t expect those herbs to be so chopping-knife resistant, but I realized I have a food processor. I don’t have to do it by hand.

There will be dinner. I will not be beaten by a leg of a lamb. I shall prevail!