From Fandango: “My question today is about your beliefs about gender. Some people believe that gender identity is the personal sense of one’s own gender. It can correlate with a person’s assigned sex at birth or can differ from it. Others, like Marjorie Taylor Greene, believe that gender identity is exclusively tied to a person’s sex at birth. If you’re born with a penis, you are male; if not, you’re female. Period. Full stop.” And so the question is: 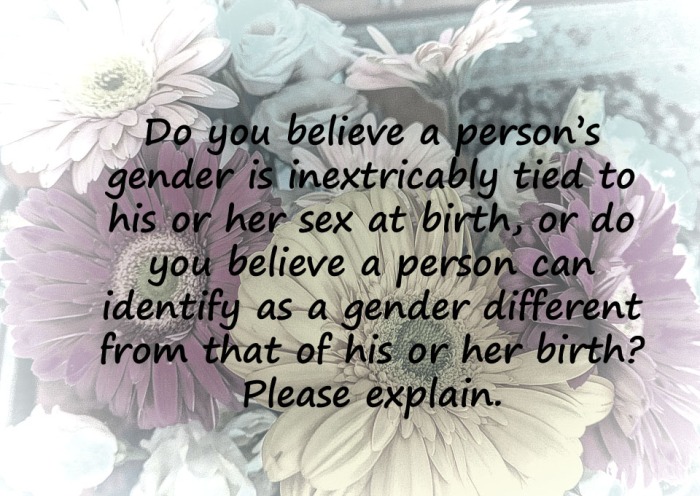 I’ve always known I was female and while I’ve been occasionally interested in my own sex. I was especially interest during periods when men were being particularly difficult. I would imagine how much easier life would be with another woman with whom I could talk the way women talk. Nonetheless, I was clear about where I was. I loved my women friends, just not the way I loved those annoying men.al

I haven’t known had any close personal relationships with transgender persons, but I have known many gay men and women. All of them knew from adolescence onward that their attraction was to their own sex and not the other. While they could pretend a relationship with the “opposite” sex, it wasn’t real and couldn’t last. For some of us who really did love each other, it was a heartbreaker. Homosexuals are what they are. I think are that way from pretty young. I don’t think this is a modern trend. It has always been this way. Sexual identity — once established — does not change. We are just making a bigger fuss about it now than we did earlier.

I can only assume that “gender” identity is similar to sexual identity. You feel the way you feel because that’s how you were made. It’s not a choice. It just is. I don’t think we get to choose who we love, who we want, who we feel we are. That’s just the way it is. Attempts to change that identity don’t work, have never worked — past or present. Is this a scientific explanation? Nope. It’s what I have seen and experienced in my life.

A couple of my closest friends were gay men. They were perfect friends. Caring, sensitive and manly, but also intuitive and unlikely to get you in a sexual death-grip. Almost always able to listen with sympathy, ready to order in pizza in the middle of the night, and if you were my best friend, also ready to trim my hair.

Where is he now when I need him most?