Euphemistically articulate and civil, too

A euphemism is a way of saying something we don’t want to say. It needs to be close enough to the thing you are trying to say so listeners don’t look at each other and say “Huh?” yet distant enough from “the real deal” so no one gets offended and runs to call the PC police.

It’s a thin edge from which I frequently fall.

I find “the N word,” as an example, an annoying euphemism. Why? Because so many people use the word anyway. Who are we hiding from? Ourselves?

It’s an ugly word, a hate-filled word, a crude word … but it’s the word those people use. Our avoiding the “center of the story” makes the story less powerful. It’s effectively letting “them” get away with it.

We need a better euphemism. A more articulate, intelligent euphemism. So you can make your point and get everyone angry enough to realize why the word is so ugly. When we dance around it, no one “feels” it.

Does this make sense? No? Never mind. I said it was a thin edge and I just fell off it again. 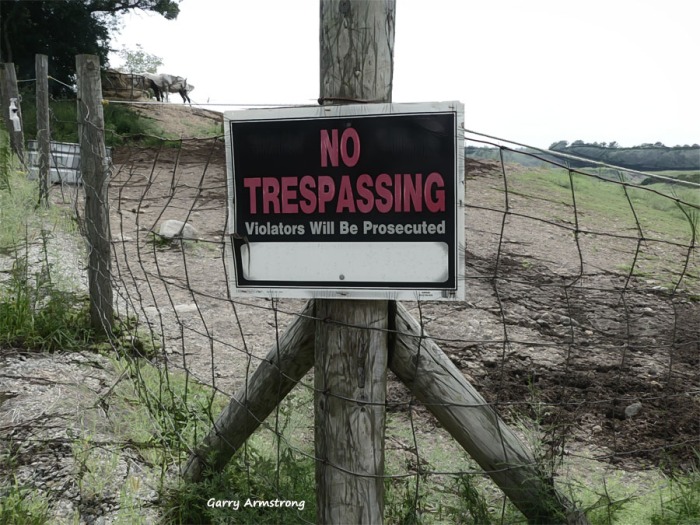 No Trespassing! Not all farms are as friendly as others. Photo: Garry Armstrong

I don’t know what I am more tired of. Politically correct language that misses the point of the conversation, or crude language that whacks you over the head and make you yearn for day where a simple act of civility would have saved the moment.

I would mostly prefer everyone stop hating each other. Stop using crude language full of ugliness and evil. We don’t need better euphemisms. We need better, kinder people who can say what they mean without spewing vileness.

I don’t think that’s too much to ask.